LACKAWAXEN RIVER — In addition to the Route 6 highway, the boroughs of Honesdale and Hawley are connected by the train tracks upon which the Stourbridge Lion once rolled with Horatio Allen at …

RR photo by Owen Walsh
It all starts here. Indutrial Point is the place where artist Jeff George first envisioned highlighting the Lackawaxen River, making it more than just an "afterthought."

RR photo by Owen Walsh
If you're hawkeyed, you might see the bald eagle that had just taken flight as this photo was taken. It went on to soar high above downtown Hawley, creating a bit of a stir with locals.
Posted Wednesday, February 3, 2021 12:31 pm
By OWEN WALSH

LACKAWAXEN RIVER — In addition to the Route 6 highway, the boroughs of Honesdale and Hawley are connected by the train tracks upon which the Stourbridge Lion once rolled with Horatio Allen at the throttle, the Lackawaxen River along which the D&H Canal once ran, and all the history and culture born of both. For the past several years, a small group of community members have been working to—quite literally—enhance these connections between the two boroughs and beyond.

Recently rebranded as Lackawaxen River Trails, known before as the Wayne Pike Trails & Waterways Alliance, the group has been working for years to realize its vision “to create 26 miles of land and water trails from Honesdale to Lackawaxen, PA and to connect existing trails in and around Honesdale, White Mills and Hawley to this main stem.”

The project has enjoyed broad community support. It’s understandable why: The project is geared to pique a wide range of interests. Kayakers, canoers, anglers, hikers, cyclists, nature enthusiasts, history buffs—the list goes on—could all benefit from the completion of this trail and waterway system.

The group’s genesis lies in two separate conversations, according to Molly Rodgers, an active member of the group. The first began with local artist and muralist Jeff George.

“In his travels, he had seen river walks and cities and towns that really featured the river that runs through them, and then he came home and looked at Honesdale where the Lackawaxen River was sort of an afterthought,” Rodgers said. “He had drawn up some ideas of what Industrial Point could look like if we took some of the lessons that others towns have used to really feature the river.”

Around the same time, Rodgers and others involved with Wayne Tomorrow, the county’s private-public economic strategizing group, began looking into the trails system in Wayne County. The talks picked up some momentum when the Stourbridge Line rail system was purchased by Tom Myles.

"The committee started talking about turning rail beds into trails, and there was a lot of resistance to that because a lot of people in Wayne County still wanted the rail system to be operational,” Rodgers said. “When Tom Myles came into the picture and bought the Stourbridge Line and started refurbishing the train cars and running excursions, he was open to creating a trail system alongside the rails.”

Soon those in the river camp began talking with those in the trails camp, and an alliance formed to pursue both ideas in tandem.

“It’s not a 501c3 (nonprofit organization),” Rodgers said. “It’s a very loose group of people who all are very interested in creating a trail system.” 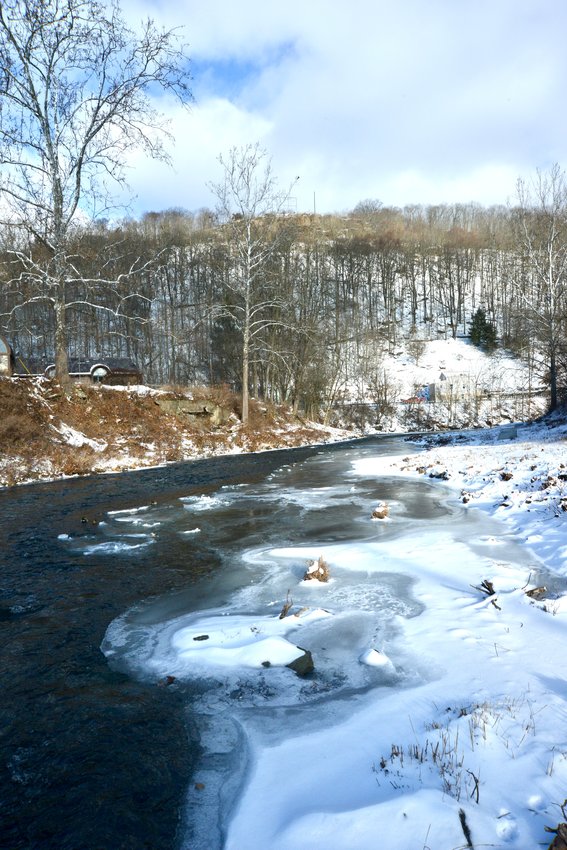 With a view of Irving Cliff on one side and a view of downtown from the other, Industrial Point is quintessentially Honesdalian vantage point.

Working with the Wayne County Commissioners in 2018, the group got the funding to complete a feasibility study, which concluded that a multi-use trail was “absolutely feasible and very desirable.”

The study actually quantified what “very desirable meant.” According to a survey of full-time residents, second homeowners and frequent visitors, 91 percent of respondents said “yes” to the idea, seven percent said “maybe” and only two percent said “no.”

The group is first tackling the creation of several river access points between Hawley and Honesdale; until now, the Lackawaxen has had no official access points. Rodgers said that this portion of the project is much simpler than the planned land trail.

“The whole land trail is a massive, multi-year project, we talk about in terms of being a legacy project. It’s something that we would hand off to our children and our grandchildren,” she said. “The river trail is an easy thing to do... so we started talking to the PA Fish and Boat Commission, and they were really, really excited.”

The commission came and helped the group narrow down around a dozen potential river access sites to five sure bets: two in Honesdale at Industrial Point and near Fourth Street; a spot in White Mills; another in Palmyra Township near the Lock 31 building; and the only one so far to be completed in Hawley next to Bingham Park. 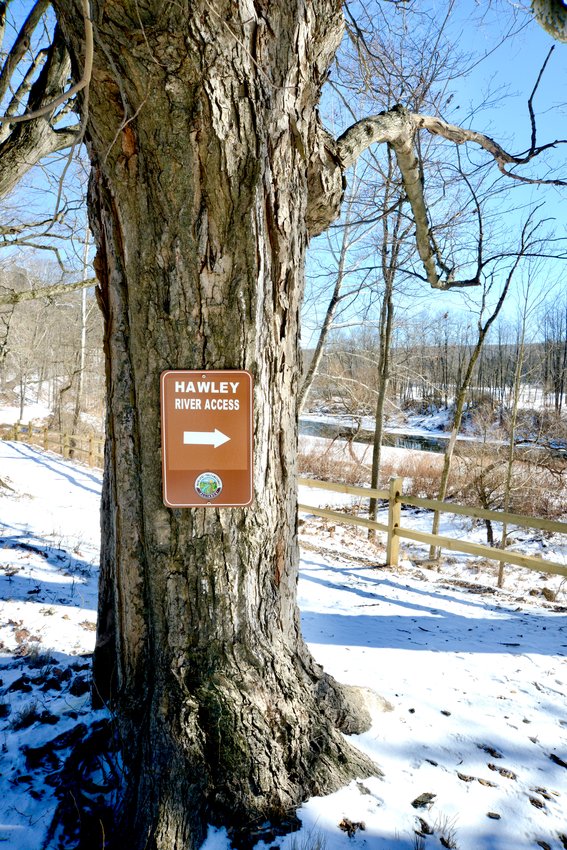 The first river access site to be completed, the Hawley stop of the trail is located just behind Bingham Park.

Rodgers, along with fellow group member Grant Genzlinger, has been hard at work trying to secure grant funding through Fish & Boat and the Department of Conservation and Natural Resources. As a result, they’ve both appeared frequently on the agendas of Honesdale Borough Council and Wayne County Commissioner meetings recently.

But now, Lackawaxen River Trails is asking the community directly for help. It received a $40,000 challenge grant from the local Villaume Foundation, meaning that if it’s able to raise $40,000 through community donations, the foundation will match that amount.

“We have more than 700 numbers from the public survey, people who were interested in getting updates, so we hope that they might consider making a donation to help make the vision into reality, at least as far as this first step is concerned,” Rodgers said.

More than $5,000 has been raised so far. The group is accepting donations online at www.bit.ly/LackawaxenRiverTrails.

When asked about what’s been toughest about the years of planning and working to complete this project, Rodgers struggled to find many negatives. It’s been complex at times, but Rodgers said it’s never stopped being rewarding for everybody involved. And while the COVID-19 pandemic has slowed some things down from a scheduling perspective, it’s mostly served to highlight the importance of the project.

“The pandemic proved over, and over, and over again how much outdoor space is needed by people,” Rodgers said. “There are so many people that are finding ways to get outside, whether it’s to a river, or to a trail system, or whatever it is; it’s been everybody’s saving grace.”

More information about Lackawaxen River Trails is available on its Facebook page. 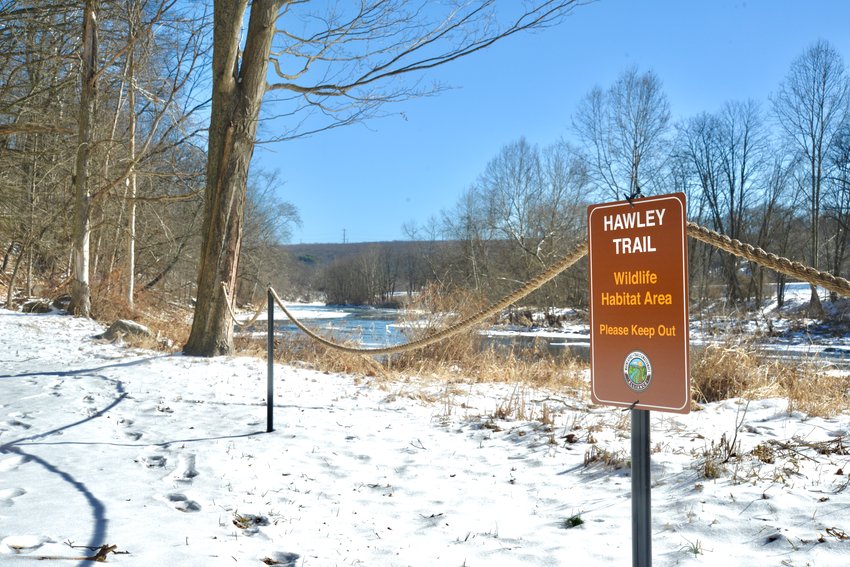