WURTSBORO, NY — The numbers of folks volunteering for community service are shrinking nationwide.

So in the early spring of 2021, the Sullivan County Bureau of Fire established the …

No ‘dumbasses’ wanted
By TED WADDELL

WURTSBORO, NY — The numbers of folks volunteering for community service are shrinking nationwide.

So in the early spring of 2021, the Sullivan County Bureau of Fire established the Recruitment & Retention Task Force (R&RTF) to address the critical need to attract new members into the ranks of the local fire and departments.

Chris Ramirez is a photojournalist with more than three decades of shooting assignments both locally and around the world. Most recently he worked for 15 years with The New York Times.

‘The most challenging and rewarding thing’

In 2010, facing the stark reality that the world of print photojournalism was on the decline, Ramirez said, “I shifted my work towards commercial cinematography, but never gave up on photography.”

He joined the Rock Hill Fire Department about 12 years ago and never looked back, commenting on the volunteer experience, “It has been the most challenging and rewarding thing I have ever done.”

Fast forward to October 2021, and the photojournalist/cinematographer turned his cache of cameras and lenses to the task force’s goal of “instilling pride among our members for the work we do, and at the same time, present relatable and inspirational stories to prospective recruits.” 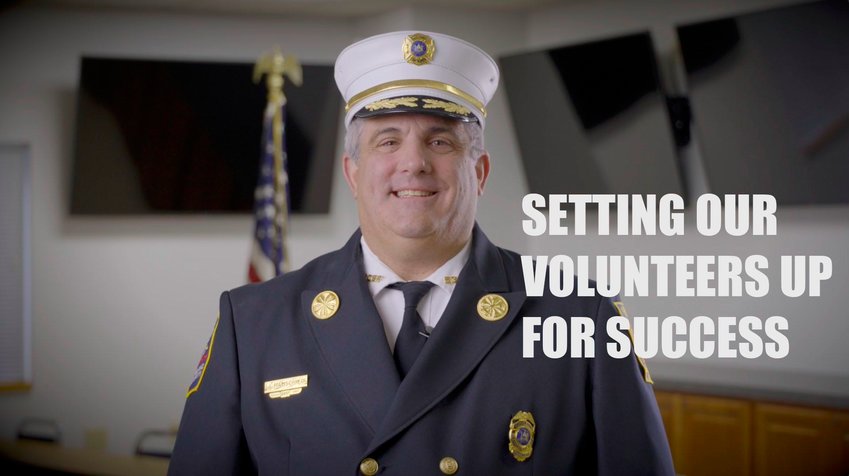 John Hauschild, Sullivan County fire coordinator, was featured on the cover of “Setting Our Volunteers Up for Success,” a production of Firehouse …

Leaving the camera behind

Reflecting on the differences and commonalities of working as a documentary photographer while volunteering with a local fire department as an interior firefighter, Ramirez said in part, “I knew being a firefighter was going to be a departure from what I was used to. As a photojournalist, we are focused on capturing events as they unfold in front of us, and not being part of the news itself.

“Leaving the camera behind was an adjustment. I learned very quickly the two do not mix very well; they are two different jobs,” he said. “The thing they both have in common is you have to show up, and that appeals to me."

Daryl Prescott, a volunteer firefighter with the Rock Hill Fire Department, was featured in the promotion “Join Sullivan Fire” by Firehouse Road. 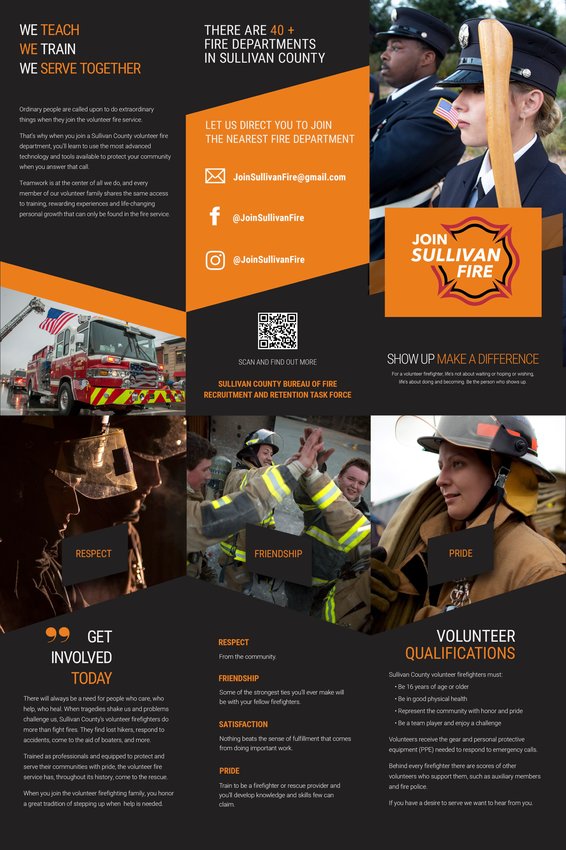 A promotional brochure created by Firehouse Road to encourage folks to sign up with local volunteer fire departments.

To date, Ramirez has created a trifold brochure for the task force titled “Join Sullivan Fire.” It graphically points out a few of the benefits of joining a local volunteer fire department.

It stresses that “Ordinary people are called upon to do extraordinary things.”

He created other promotional materials and productions, all focused on adding new recruits to the fire service, and getting them to stay.

According to Ramirez, the mission of the task force is twofold: it seeks to “inspire more of our members and neighbors to join the fire service, and to ensure the success of our current members.”

As the documentary project continues to evolve, Ramirez said the countywide outreach effort will concentrate on recording individual stories from Sullivan County’s 40 fire departments, “highlighting department specialties, training, and the services they excel in.”

For more information on the Sullivan County Recruitment & Retention Task Force and the importance of volunteer firefighting, watch the video “The Way Forward: Creating a Task Force for Recruitment and Retention” at https://bit.ly/38Rd2Nw, follow video links on Facebook at JoinSullivanFire; see it at at “Decide to Show Up” at https://vimeo.com/676468025;  or contact Chris Ramirez: at http://firehouseroad.com, call or text 914/799-0601, or email Chris@Firehouseroad.com.

Writing something worth reading

Spreading joy throughout the year