A century of saving lives

BEACH LAKE, PA — Sometimes it takes a terrible tragedy to serve as a wake-up call to a community.

Sometimes the community needs to make a few changes in order to protect its citizens.

A century of saving lives

“I am Peter Bielfeld...tell my family I love them”
By TED WADDELL

BEACH LAKE, PA — Sometimes it takes a terrible tragedy to serve as a wake-up call to a community.

Sometimes the community needs to make a few changes in order to protect its citizens.

In August 1912, three young boys perished in a fire at the Ives Bowling Alley in Beach Lake, PA. It was a heart-rending event. “The people of Beach Lake felt helpless as they watched the disaster unfold,” writes local historian Carol Henry Dunn in the 100th anniversary souvenir journal for the Volunteer Fire Company of Beach Lake (VFCBL). “With a determination to be prepared for such disasters and have equipment to fight fires, community members began to organize in 1921 to form a fire company.”

A newspaper article penned by an unnamed scribbler of bygone days appeared in the August 16, 1912, edition of The Citizen, a Honesdale-based newspaper. It stated that the lads were sleeping in the bowling alley, and once the alarm was sounded, hundreds of people, including many summer guests at the nearby Duneden Boarding House, rushed to the scene in a futile attempt to rescue the boys. They watched, horror-stricken, as the kids burned to death in the raging flames.

According to that article, written 109 years ago, “People became frantic, and a desperate attempt was made to rescue them,” but without a fire company, there was little that could be done to save the boys.

With those searing images of children burned alive, folks in the village decided it was high time to form a fire department, and 100 years ago, they started to organize a volunteer fire company, which was formally incorporated on April 7, 1925.

The fledgling company’s first apparatus was a 1929 American LaFrance chemical engine, but as the decades passed the company constantly upgraded its stable of apparatus, equipment and level of fire-fighting training. 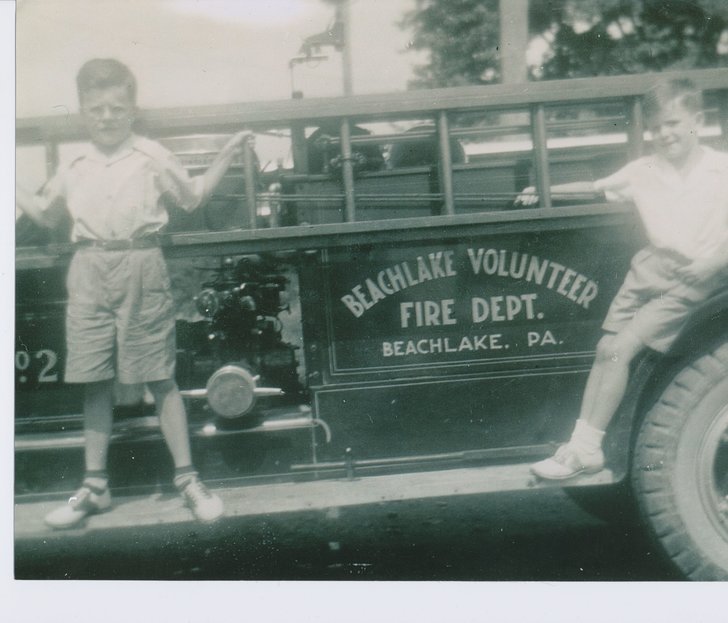 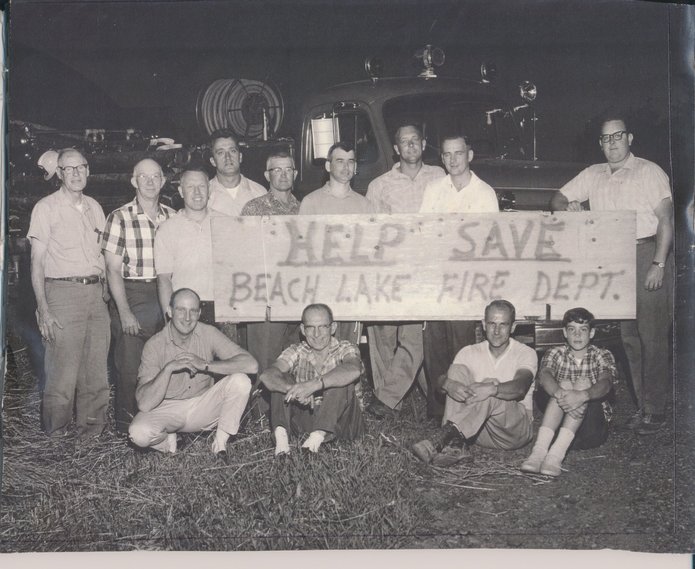 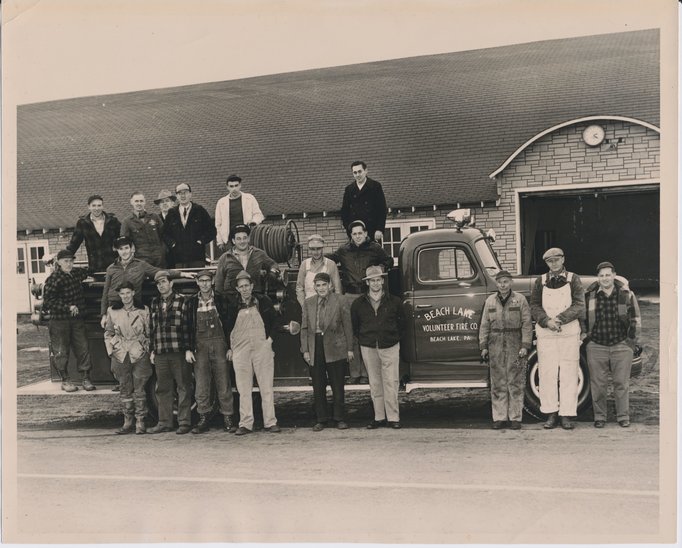 In the wake of WWII, the company moved its apparatus and equipment out of George Haker’s old blacksmith’s shop and onto the property of a new fire hall, which was dedicated on May 18, 1948.

A year later, in February 1949, the Ladies Auxiliary was formed, with Rose Avery serving as the group’s first president.

Today, as a sign of modern times, the auxiliary welcomes both women and men into its ranks of dedicated volunteers. They are tasked with fund-raising events such as hosting the ever-popular craft fairs and dinners.

From 1950 to 1962, the company’s volunteer firefighters helped out at VanGorder’s Speedway, a local venue for stock car racing.

A lot of folks know the VFCBL as the Beach Lake Fire Company, but whatever the name, the company is poised to celebrate its 100th anniversary this Saturday, September 11, in conjunction with a parade commemorating the 20th anniversary of the terrorist attacks on American soil.

The parade was put into motion by the Northeastern Pennsylvania Volunteer Fireman’s Federation (NPVFF) in cooperation with the VFCBL.

The parade line-up will take place about an hour before step-off, at the intersection of Butternut Flats Road and Milanville Road.

The step-off time is scheduled for 2 p.m., and those in the parade will march in formation for about a half mile along Milanville Road, ending at the fire station, where numerous activities will take place, including a barbecue.

A centerpiece of the VFCBL’s 100th anniversary is the 44-page souvenir journal prepared by Dunn, who is the historian for the fire company. Dorothy Kieff, a “community member with lots of computers,” raided the memories and archives of long-standing volunteer firefighters in the company. 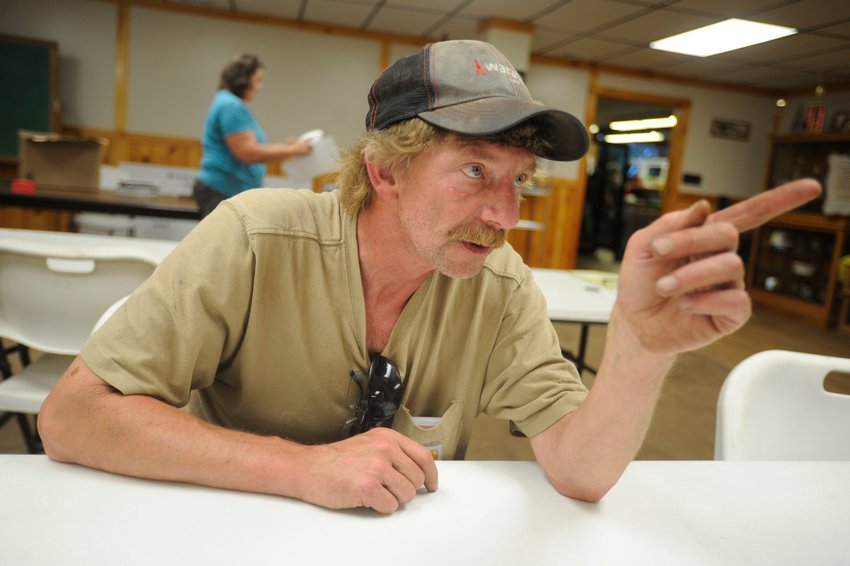 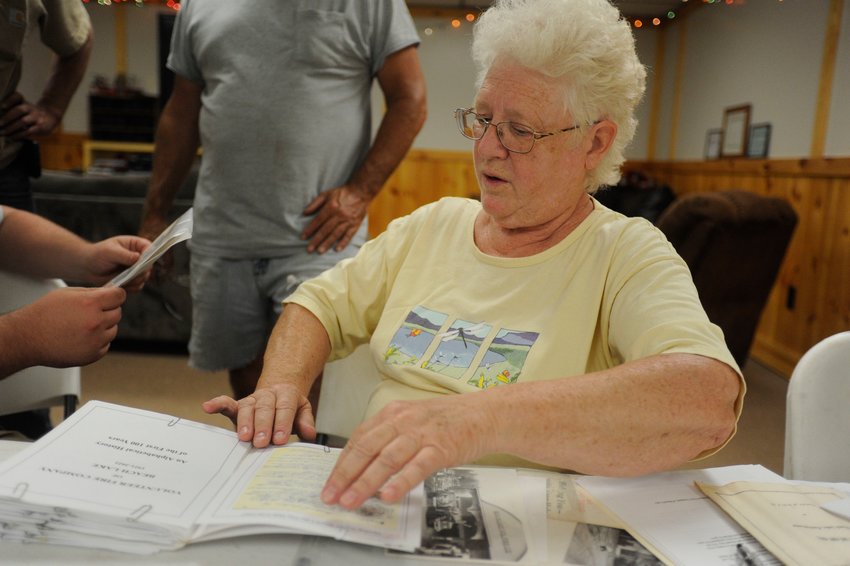 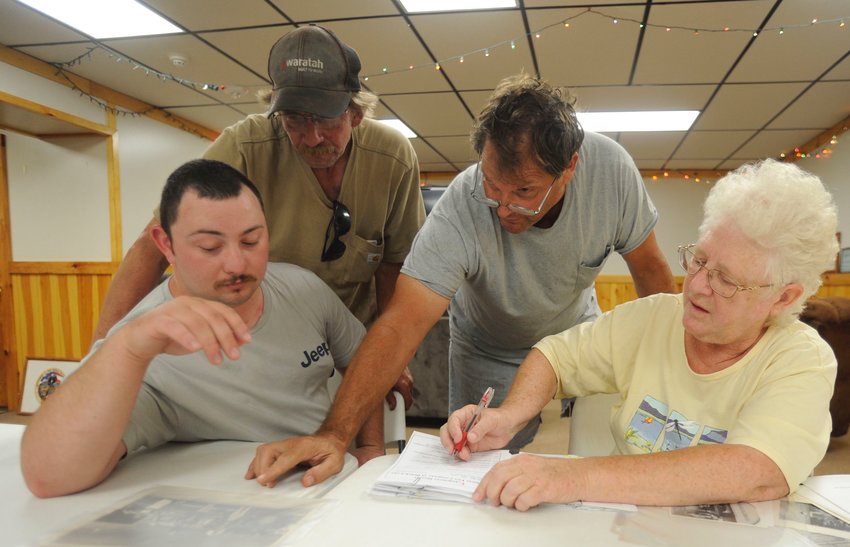 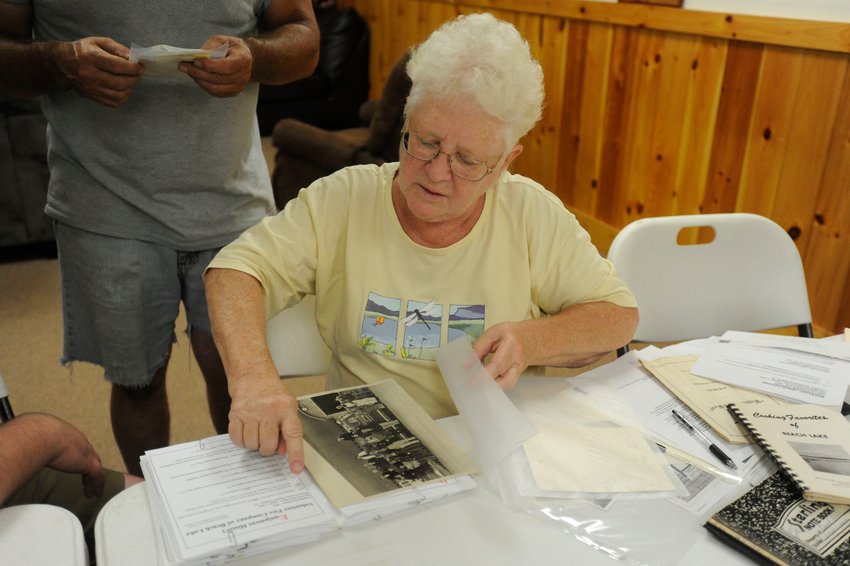 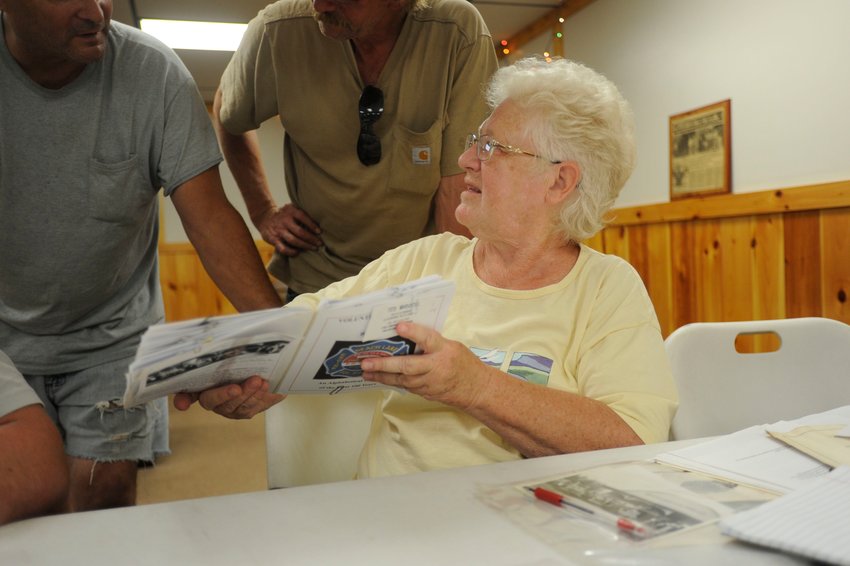 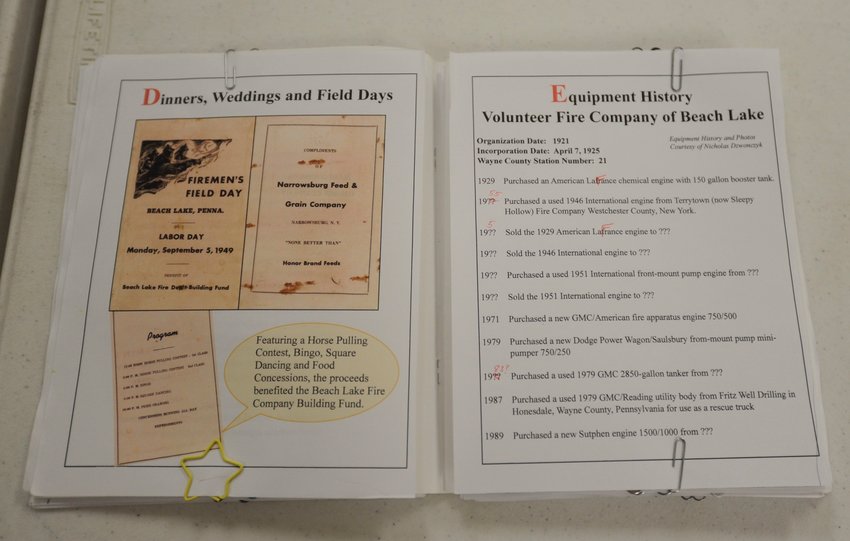 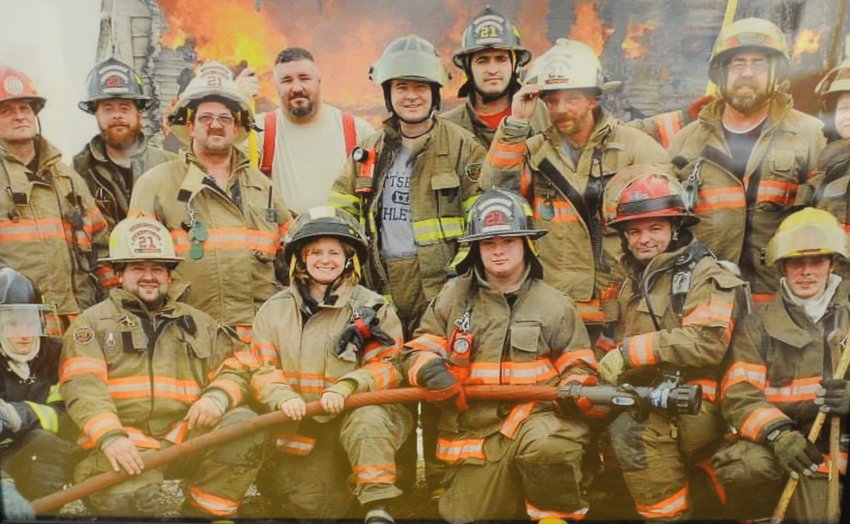 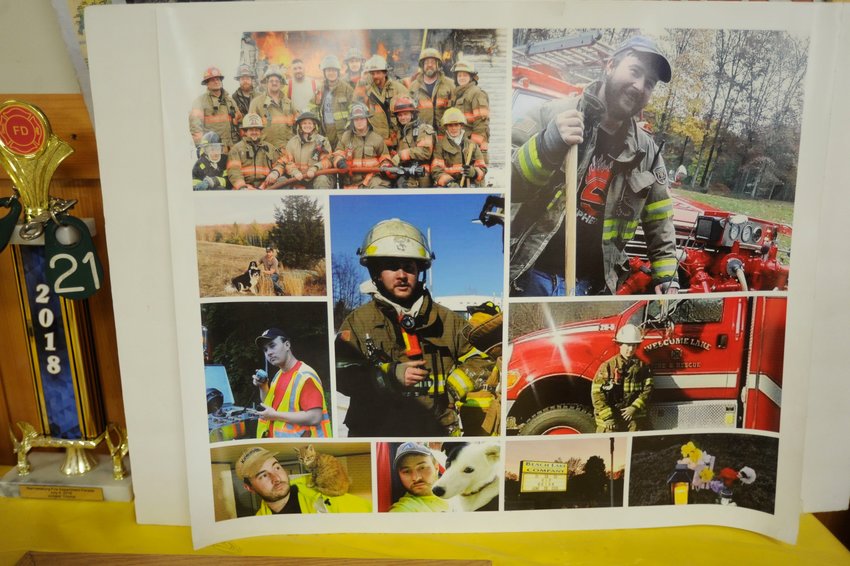 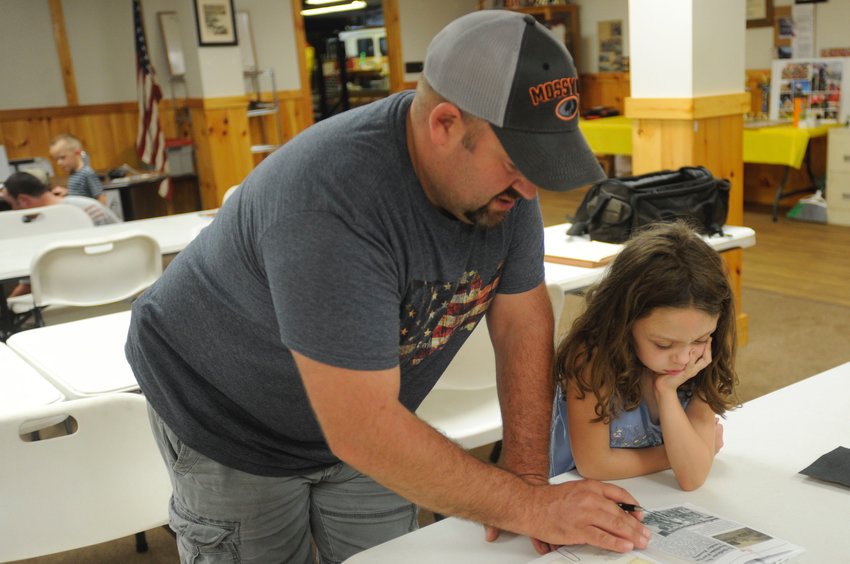 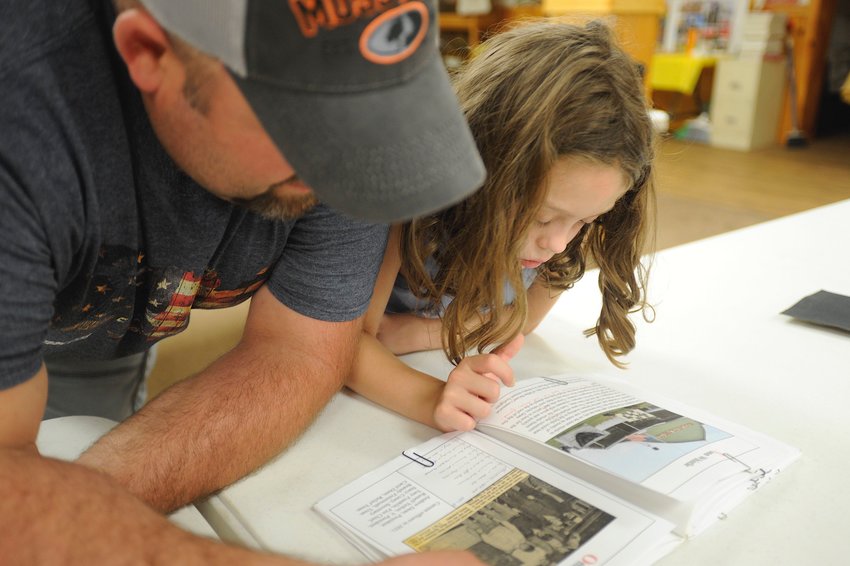 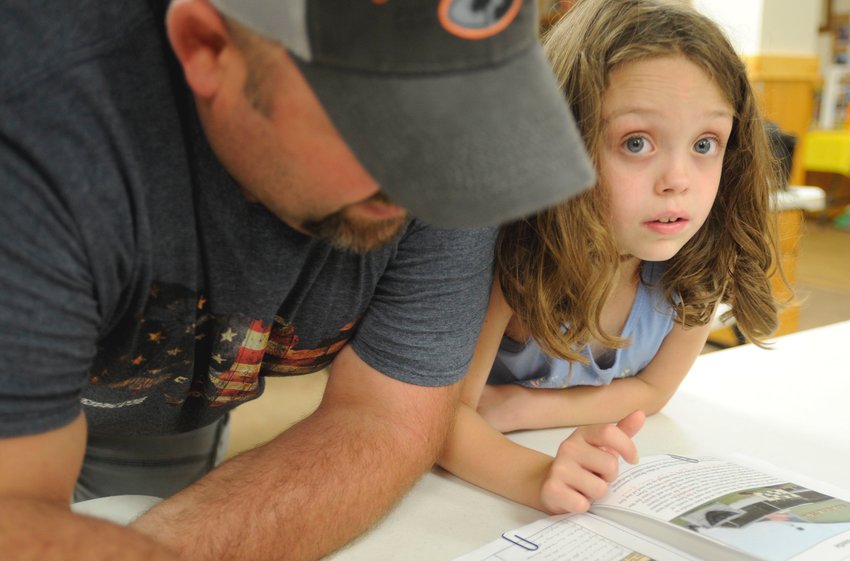 On Monday, as part of the company’s regular drill night, Dunn, who in her “spare time” serves as the Berlin Township historian, sat down at a table in the firehouse to go over the final draft of the history-rich booklet.

Joining her were Chief Anthony “Tony” Franklin, and captains Billy Franklin and Andy Dean. A bit later, firefighter Russell Yerkes and his eight-year-old daughter Isabella stopped over to take a look.

As Russell thumbed through the pages, Isabella watched intently, pointed to a particular photograph that caught her eye, and said, “Daddy, that’s you!”

In her summation of “The First 100 Years, 1921 to 2021—A Brief History” of the VFCBL, Dunn wrote, “Today the volunteers operate a modern fire company that has successfully served the community for 100 years. Members look forward with enthusiasm to the challenges and changes that the next 100 years will bring.

“September 11, 2021 is also the 20th anniversary of the terrorist attacks on the Twin Towers in New York City, and the other terrorist attacks that occurred that day in the air above Shanksville, PA, and at the Pentagon near Washington, D.C. Let us never forget that terrible day,” she continued.

For more information about the VFCBL and the 9/11 remembrance parade on Saturday, September 11, call the fire station at 570/729-7779, or visit their Facebook page, BeachLakeFire.

Forestburgh Playhouse to hold auditions for young actors, and more