WAYNE COUNTY, PA — A lot can happen in a year. With vaccine rollouts and ongoing pandemic woes, a major environmental milestone, local connections to national headlines, and an impactful …

WAYNE COUNTY, PA — A lot can happen in a year. With vaccine rollouts and ongoing pandemic woes, a major environmental milestone, local connections to national headlines, and an impactful infrastructure issue highlighting the difficulty between modernization and maintaining the area’s historical feel, a lot did happen in Wayne County this year.

Have a look back at 2021 through the lens of Wayne County’s most impactful news stories. 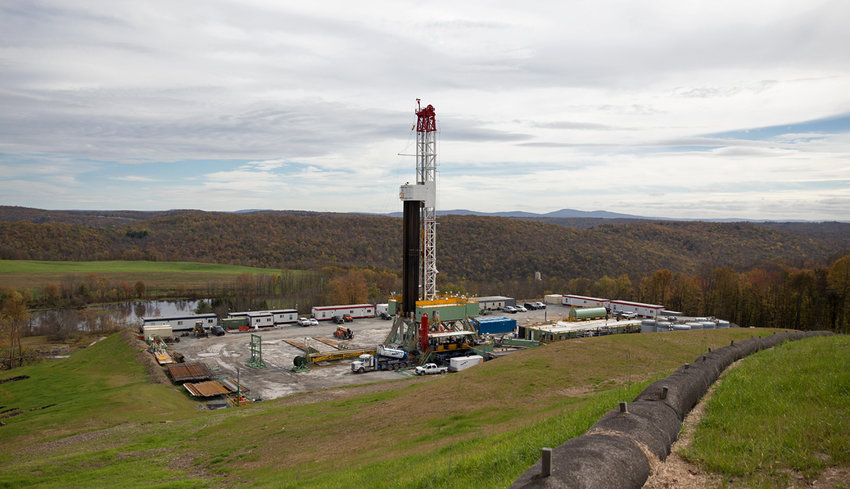 Cabot Oil & Gas Corporation has six drill rigs running in Susquehanna County, Pennsylvania. This rig is the most recent as of October 2013 in …

Contentious debate, a landmark ruling and various legal battles kept the issue of hydraulic fracture drilling—or fracking—fresh on many Wayne County residents’ minds throughout 2021. Portions of Wayne County along the Delaware River are thought to be ripe for lucrative natural gas development. Developers have long had their eyes set on the county, while activists have fought long and hard to keep them out.

In our first issue of the year, River Reporter reviewed a court case between the Delaware River Basin Commission—which at that time was prohibiting natural gas drilling via moratorium—and a plaintiff called Wayne Land and Mineral Group, or simply Wayne Land, which hoped to construct “at least six natural gas wells” in Wayne County.

In the court system since 2016, the case dealt with whether or not the DRBC, an interstate regulatory body tasked with protecting the Delaware River and its resources, had the legal authority to enforce a fracking moratorium. Wayne Land, and other fracking advocates, maintain that the commission has no such authority.

By late January, PA Republicans, Damascus Township and the Wayne County Commissioners filed their own lawsuit against the DRBC, also challenging the moratorium. The plaintiffs argued that by restricting landowners’ rights to lease their own property to natural gas drillers, the DRBC’s moratorium “constitutes to a regulatory taking of private property.”

Facing multiple legal challenges to its more-than-decade-long moratorium, the DRBC issued a landmark ruling in March by placing a full ban on fracking in the Delaware River.

2021 highlights at a glance
By OWEN WALSH
January: Pennsylvania’s temporary COVID-19 shut-down on indoor dining, gyms, movie theaters and concert venues is lifted—though some local businesses, especially gyms and fitness centers, had been ignoring these restrictions anyway.
February: Rep. Matt Cartwright (PA-08), who represents much of NEPA, demands a change of leadership in the U.S. Postal Service—citing the fact that 94 percent of his constituency is reporting slow or undelivered mail.
March: In an effort to deal with a severe lack of police officers, Honesdale mayor orders the reversal of a long-standing rule that at least two officers must be on duty in order to respond to calls. In response, the police officers association files an unfair legal practice complaint, saying this reversal threatens officer safety.
April: Two residents attend a Wayne County Commissioners meeting with a 900-signature petition for the county to be declared a “Second Amendment sanctuary.” The commissioners decline the request, saying that their role is administrative, not legislative.
May: Wayne County begins $2 million property tax reassessment project to make the tax landscape more equitable.
June: Wayne County hires a company to complete a feasibility study for an agricultural innovation center designed to jumpstart the local dairy industry.
July: The Upper Delaware Council, Housefly Fishing, the Keep Hawley Honesdale Beautiful group, and the Sea Scouts of BSA organize a cleanup of the Lackawaxen River from Honesdale to Hawley.
August: After getting canceled in 2020, the Wayne County Fair returns in 2021, drawing large crowds “celebrating a return to normal.”
September: Wayne County school districts reopen amid rising COVID-19 rates. An unexpected mask mandate in the first week sends some districts scrambling to establish new rules overnight.
October: To deal with its budget woes, Honesdale Borough councilors consider establishing an earned income tax for residents and nonresidents working in the borough. Residents come out passionately opposed to the idea.
November: Wayne County considers merging its prison with a facility in Pike County. The local law enforcement and correctional community gather in the Honesdale Central Park to protest the merger, which they say would hurt Wayne County’s security and cost jobs for the county.
December: A rusted-out light pole in Honesdale falls onto the hood of a parked car on Main Street, highlighting the dire state of much of the borough’s aging infrastructure.

The resolution banning the practice cited “more than a decade of experience with high volume hydraulic fracturing in regions outside the Delaware River Basin” in deciding that allowing fracking activities would “pose signiﬁcant, immediate and long-term risks to the development, conservation, utilization, management and preservation of the water resources” of the river.

Environmental activists throughout the region celebrated the ban as a major victory. However, a few loose threads linger.

The DRBC has yet to issue its final ruling on fracking wastewater, and whether it will allow this wastewater to be imported into the basin, or for water to be exported from the basin for fracking-related activities. A recent set of draft rules on the topic “discouraged” both importing and exporting but fell short of outright prohibiting either.

Activists say they’re unsatisfied with the proposed rules and will accept nothing less than definitive bans of any activity that supports fracking.

The commission is accepting public comment on its draft wastewater rules through February 28, 2022. More information is available at https://www.state.nj.us/drbc.

Maybe the country’s single most significant story of 2021 had connections to our backyard.

In the days following the January 6 storming of the U.S. Capitol Building, social media posts made it clear that 26-year-old Narrowsburg native and former Honesdale High School student Edward “Jake” Lang was involved.

Like others involved in the pro-Trump demonstration-turned-siege, Lang notably made no effort to conceal his participation. Quite the opposite, in fact—he posted a plethora of photos and videos of himself on the steps of the Capitol as things turned chaotic and violent.

He made sure to identify himself out of the large crowd in one video, placing an arrow pointing to his face and writing, “This is me.” In another post, he challenged law enforcement directly, telling them, “Arrest me. You are on the wrong side of history.”

Since his arrest, more than 1,000 pieces of evidence of against him have been filed and he has been charged with 13 counts, including some felonies. His attorney has since moved for Lang’s release from custody as he awaits trial, claiming he has been abused physically and mentally by guards. A federal judge denied the motion last September.

Lang to remain detained for now 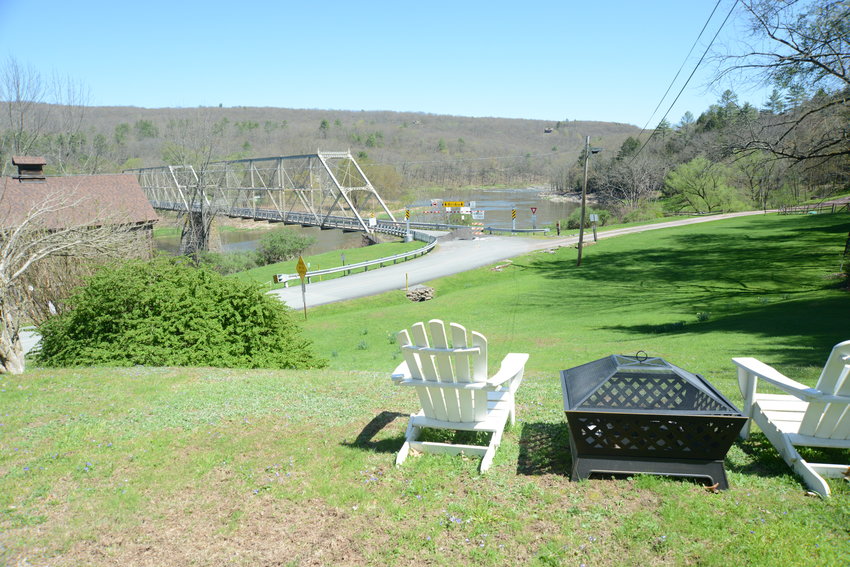 Owning the house where the Skinners Falls bridge's namesake, Milton Skinner, once lived gives Steve Ircha a unique perspective on the structure's …

No one is particularly happy that the Skinners Falls Bridge—one of the 10 bridges connecting Pennsylvania and New York State over the Delaware River—has been closed since 2019, after an investigation discovered significant structural deterioration. But this past year proved that there’s not a whole lot of consensus over what should be done about it.

In the Wayne County Courthouse, the general feeling is that it would be better to replace the aging bridge with something new, for less money, that can handle more weight.

“There new bridges in the northern Delaware that I can remember them building. The Narrowsburg bridge has been rehabbed, but it’s still an old bridge and it’s still old piers; the Damascus bridge has been rehabbed and they’re going to rehab it again, but it’s still old piers, it’s still an old bridge; same thing with Callicoon,” Wayne County chairman Brian Smith said earlier this year. “At some point in time, I think they need to have a new bridge put in that’s a concrete structure.”

But up in Milanville, PA, some residents who live closest to the bridge are skeptical of what replacing the bridge would mean for their idyllic community.

“The real goal, in my mind, is to build a two-lane bridge and then get more engineering fees to then make new approaches to the bridge in anticipation of a big highway from Beach Lake to Milanville,” Steve Ircha—a local resident who owns the property around the bridge on the PA side— told River Reporter in May 2021. “If that happens, you can kiss the flavor of the area goodbye.”

Advocates for the bridge’s rehabilitation have been at odds with PennDOT’s work throughout the year, arguing that the surveys don’t properly take into account the public’s desire to preserve the historic nature of the bridge.

PennDOT has been conducting surveys and studies as part of a Planning and Environmental Linkages study, to help guide possible alternatives for replacing and rehabilitating the bridge. A draft Purpose and Need document written toward the end of the year acknowledges the bridge’s history while claiming that there’s a pressing need for emergency vehicles to be able to access the bridge, with vehicles far too heavy for the bridge’s current capacity. It will accept public comment until January 8, 2022. More information is available at https://www.penndot.gov.

Another year has gone by, and the effects of COVID-19 remain omnipresent in day-to-day life. Wayne County began 2021 with the promise of vaccination, but was soon met with the reality of a slow rollout. By late January, Wayne Memorial Health System had mostly finished vaccinating the top-priority people in the area, but the state’s limited supply slowed down its ability to keep the immunizations flowing.

Wayne County marked one full year of life with COVID-19 in March. By April, far greater vaccine availability allowed PA to expand eligibility to all Pennsylvanians 16 years and older.

After a summer slump in case numbers, September marked the beginning of a “fourth wave,” as incoming CEO of Wayne Memorial James Pettinato referred to it. By the end of the month, Wayne County was regularly seeing between 30 and 40 new cases of the virus per day.

With schools back in session, colder weather driving activities and events back indoors, cold and flu season in full swing coupled with the holidays, the fall and winter have been tough. By the end of the year, things have gotten as dire as ever.

Just last week, Pettinato spoke to River Reporter again about the “critical” situation at Wayne Memorial Hospital. Roughly just half of Wayne and Pike counties have been vaccinated, and the hospital’s emergency room and COVID wing have been inundated with patients.