MONTICELLO, NY — A small room up on the second floor of the Monticello Gaming & Raceway is like a world unto itself. It serves as the control center of all the pari-mutuel and simulcasting …

MONTICELLO, NY — A small room up on the second floor of the Monticello Gaming & Raceway is like a world unto itself. It serves as the control center of all the pari-mutuel and simulcasting betting from the local harness track to viewers around the globe.

The other day, Shawn Wiles, general manager at the area’s trotting track, introduced this rather horse-clueless sports scribbler to three of the track’s longest-serving employees, folks who work diligently to keep tabs on the action in real time, monitor the flow of international betting, and keep all the integrated computers operating.

At first glance, it’s a bit like the flight deck of the USS Enterprise, with all the electronics humming in the background and the crew in control of the galaxy-roaming starship.

Although Mr. Spock seemed to be on holiday, large black and white photos of famous horses and drivers from the past adorned the walls, including a somewhat-faded vintage snap taken during a memorable race between a circus camel and an elephant, staged by the one-and-only John Manzi, the track’s illustrious former public relations and media guru. 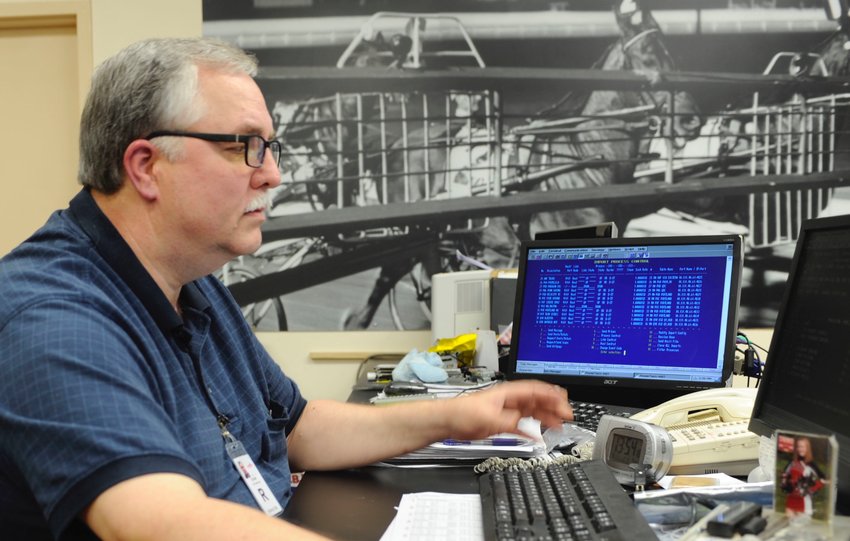 Donald Bickel is in charge of the local raceway’s TOTE computer systems, and in his “spare time” repairs their computer equipment. He is a …

Donald Bickel is the test operate test exit (TOTE) technician at Monticello Raceway, in charge of all the computer systems that keep the simulcasting systems connected to the international audience of harness racing fans and bettors around the world.

After serving his country in the U.S. Army, he got a job as a security guard at the raceway, and soon afterward landed his position as the track’s go-to guy in computers and technology, including repairing the complicated electronic gizmos.

“We’ve seen a lot of changes, that’s for sure, some good, some bad,” Bickel said of his 34-year career at the “Mighty M.”

“It would be nice to see the crowds back, but the ‘handle’ is up. We can’t complain about the money, but we do miss the crowds.”

Looking around the room at his co-workers, he exclaimed, “I love the people I work with; they’re like family to me… I’ve become a fan watching all the races, and I get to do computers and repairs.”

His perspective on the future of harness racing?

“I hope it gets better,” replied Bickel. “Innovative things to bring more fans back, people into the grandstands.” 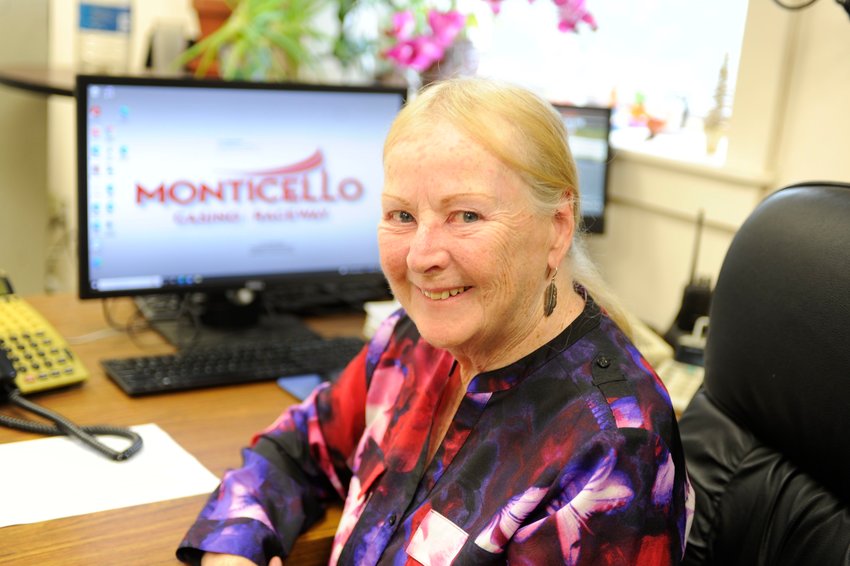 Maureen Flynn, director of pari-mutuel and simulcasting, has been at Monticello Raceway for 43 years.

Maureen Flynn, director of pari-mutuels, a type of betting, and simulcasting at Monticello Raceway, is a 43-year veteran at the local harness track.

“I started out on a window as a cashier, working a second job from around six at night to 1 a.m.,” she recalled. “We had a lot of people at the track in the early days of OTB… people coming to the raceway throughout the 1980s and ‘90s.”

As the years progressed, so did Flynn: from cashier to assistant mutuels manager, then manager of the pari-mutuels, to her present position as director in 1990.

“We handle all of the contracts to the sites, thoroughbred and harness tracks across the United States, Canada, South America and Mexico, Germany, the Netherlands, and South Africa,” she explained. The contracts make it possible to bet, even if you live in another country. Flynn noted that the Monticello Raceway has “been international for some time” as the business of betting on harness racing kept up with the changing times.

As an example of the reach and scope of harness racing pari-mutuels and simulcasting, Flynn said she keeps track of 18 pages of data and stats, representing hundreds of sites around the world that tune into the raceway’s live-streaming of racing cards.

On the history of harness racing, she said in essence that as times change, some folks are more interested in NASCAR auto racing rather than horse racing, but the sport still holds its own, adapting to modern technology.

Thinking back to when John Manzi staged the legendary camel versus elephant race, and Miss Monticello Raceway Beauty Pageants made the front pages above the fold, she recalled that during a championship bout on fight night before a crowd of thousands, one boxer was KO’d within the first 10 minutes of the pugilistic contest.

“Over the years so much has happened,” said Flynn. “People have become familiar with our signal, and it’s starting to pick up again.”

“The thing about racing is you never know what’s going to happen when you walk in here. It’s like anything, it has its ups and downs… it’s like a little family. We’ve been together for a long time.”

“It’s a very old sport, and has been around a long time, and it will always stay around with a smaller following… we’re survivors,” said Flynn. 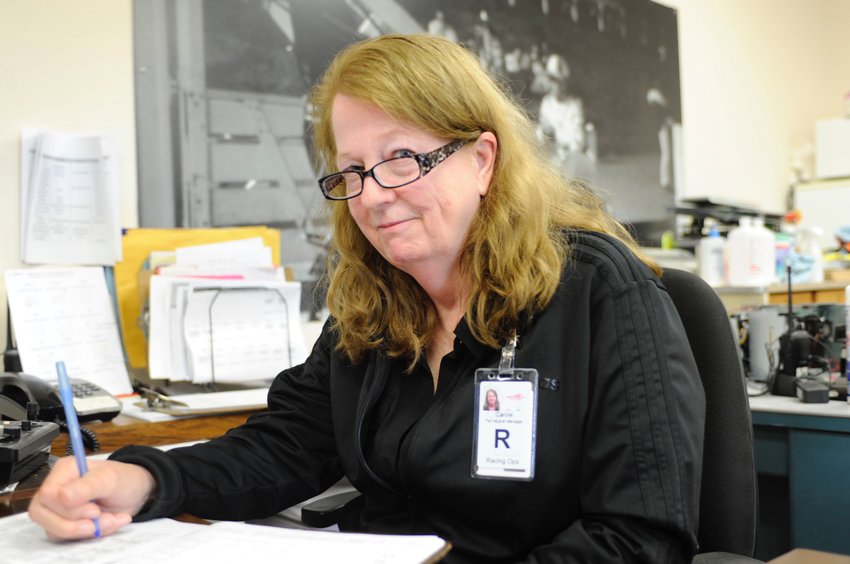 Carole Brewer Macedonio started at the raceway in 1980. A fifth-generation horsewoman, she is the track’s pari-mutuels manager and the co-founder …

Carole Brewer Macedonio came to Monticello Raceway from a five-generation family in harness racing, as her great-grandfather started out in Maine as an owner/trainer/driver, her father did the same, followed by her husband and son.

Her dad, Max Brewer, was involved in the sport while in Maine, and then got into harness writing for magazines in Harrisburg, PA, as an associate editor of Harness Racing Magazine, then onto Horseman & Fair World. The latter was described by the United States Trotting Association (USTA) as “an iconic publication that cannot be replaced; its legacy will live on.” Later he handled publicity at Roosevelt Raceway out on Long Island, before being hired as publicity director (and later announcer) at Monticello Raceway in its inaugural year of 1958.

Her late husband Carmine was an owner/trainer/driver, while her son Ryan writes for the Hambletonian Society and the Breeder’s Crown, “putting in a lot of work behind the scenes, doing interviews all over the United States, Canada and France.”

Adding a bit of personal lore, Macedonio, now in her 19th consecutive year at Monticello Raceway, recalled that when the local harness track first opened, her future mother lived in Philadelphia, while her father was from Maine, so the village of Monticello was a happy meeting ground in the middle.

As a 20-year-old, she took a job as a cashier at the “Mighty M” in 1981, in the wake of working very briefly as a “beer-bottle girl” during a simulcast boxing match at the track’s night club.

“I lasted one night,” she recalled of her short nightclub experience, and then she joined a group of 150-or-so cashiers staffing the betting windows during the raceway’s golden era.

“It was a nice way to make friends… a lot of tips and a lot of cash. (Harness racing) was very exciting, the thing to do in the 80s.” said Macedonio.

She took a break from the local raceway to work as a cashier at several other famous tracks—Pocono Downs, Pompano Park, Yonkers and Gulfstream—before coming back to Monticello in 2003, where she is the manager of pari-mutuels.

Sitting in front of several split-screen computer monitors, Macedonio watches all the action, recorded in real time from several television cameras so judges can review the results for possible fouls or interference. She has a bird’s-eye view of the winner’s circle.

Her take on the evolution of harness racing?

“It’s a different time now,” she said. “Harness racing used to be a social gathering, and older couples used it as an event to go out to dinner and watch the races… unfortunately it’s now become more of a place to televise the races.”

According to the Facebook page, folks can “view pictures, videos and links to old newspaper and magazine articles of your favorite drivers, trainers, friends, and of course Horses!

“View the Winner’s Circle pictures and racing programs of the past and relive the good old days!” 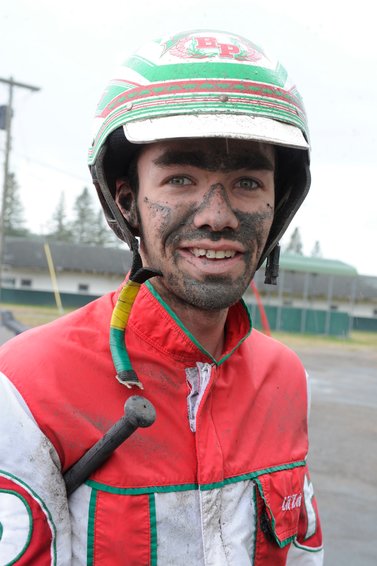 Rising star. Brandon Parker, a 23-year-old driver, is starting to make his mark at Monticello. On August 17, he drove in all eight races, winning the first behind “Teeter.” Parker will be featured in a future edition of the River Reporter... 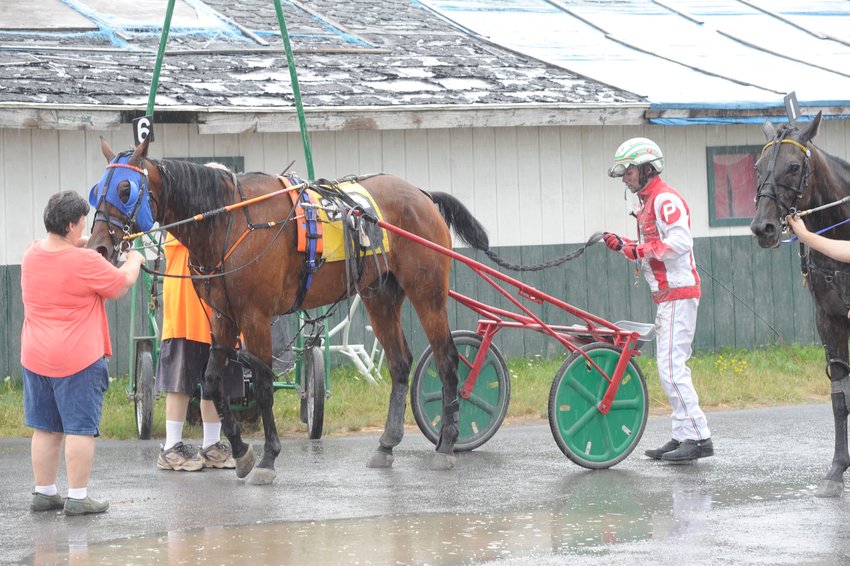 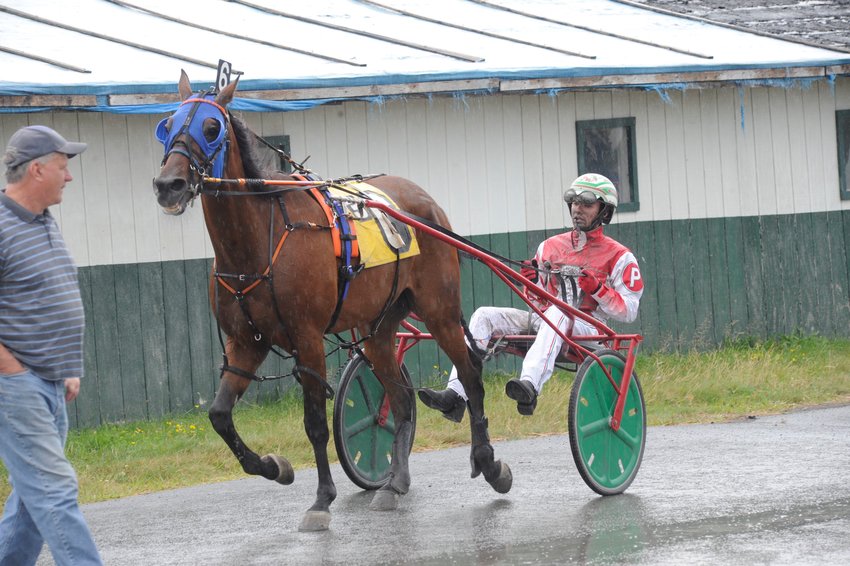 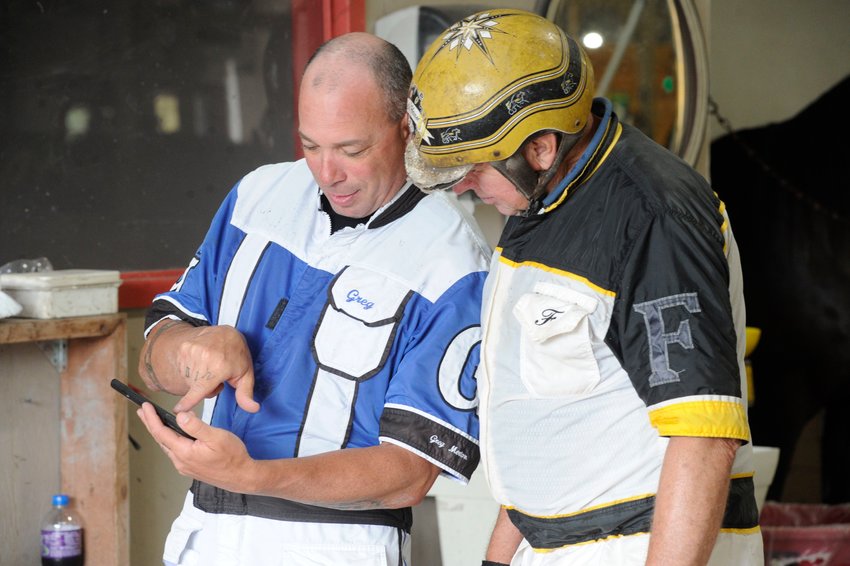 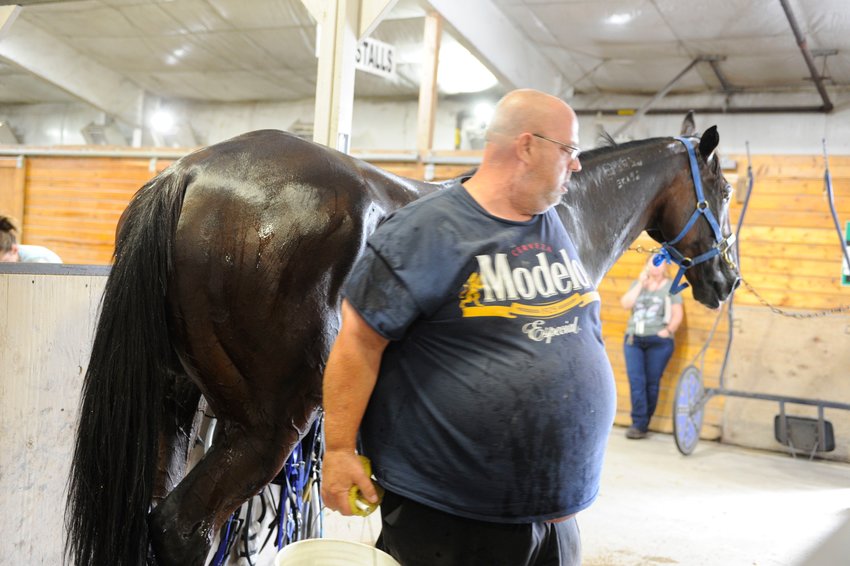 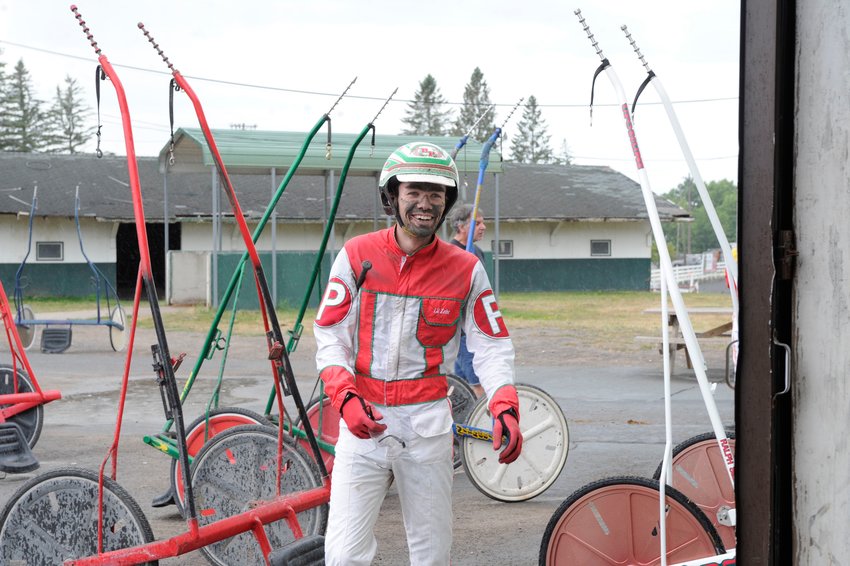 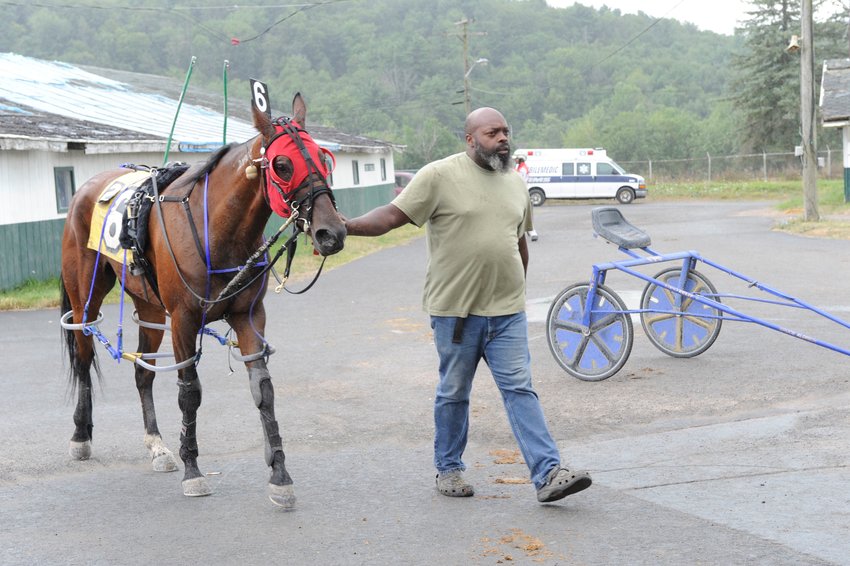 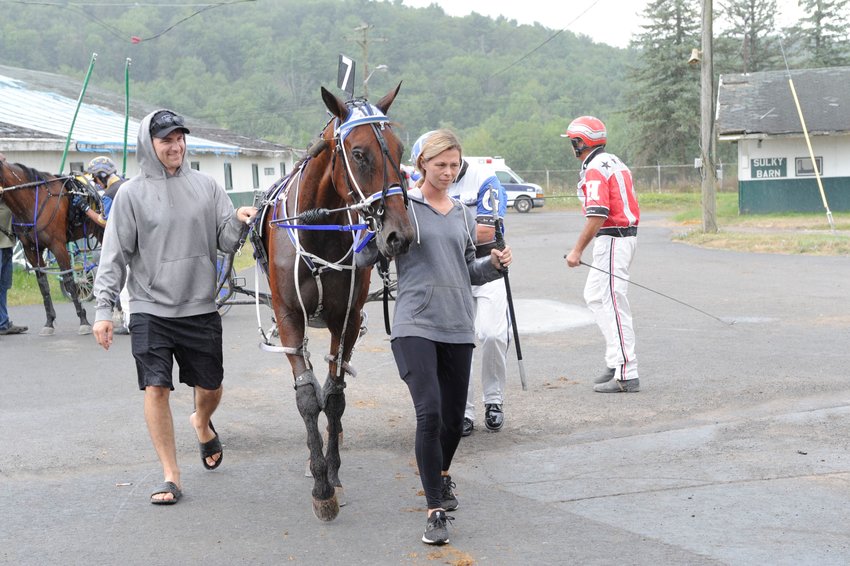 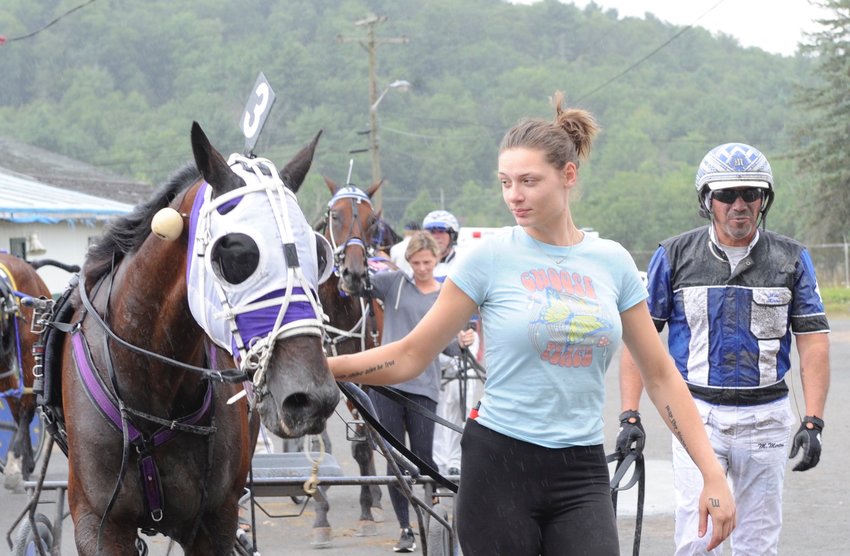 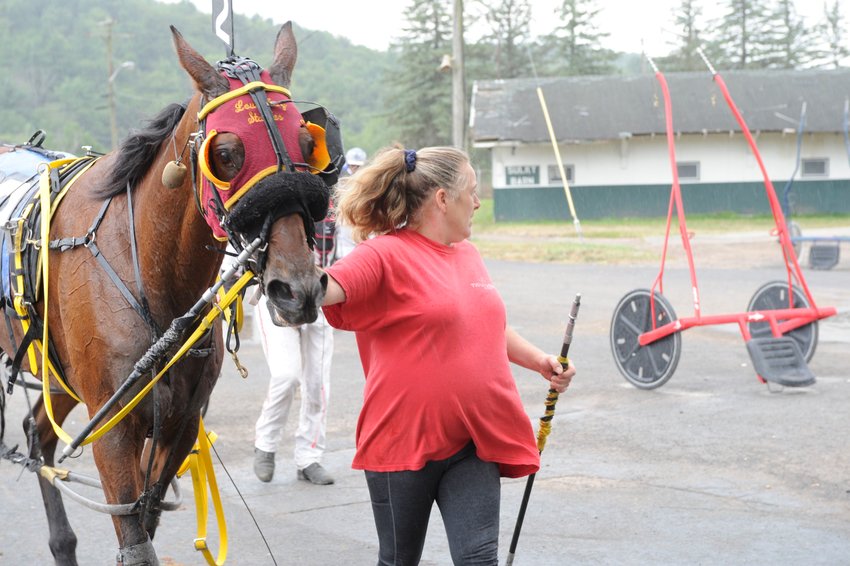 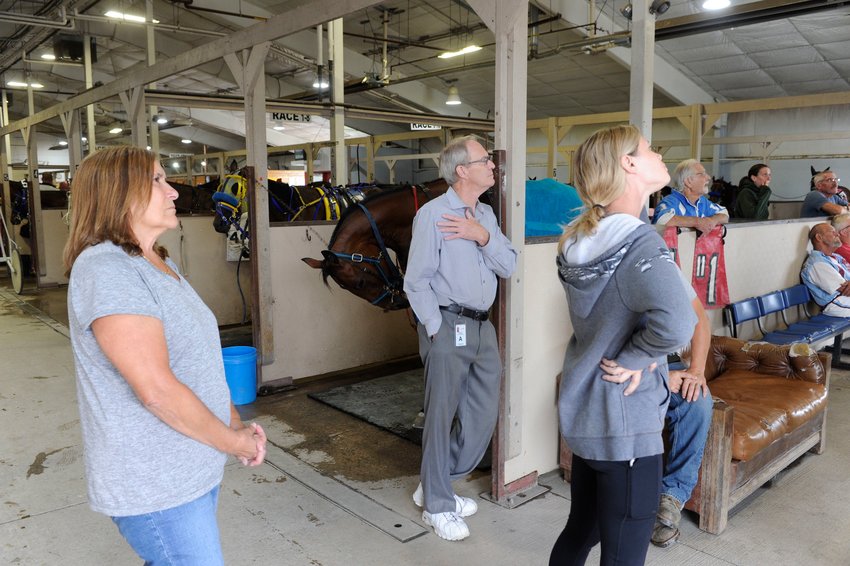