Well, it’s Thanksgiving—or likely a day or so afterward, by the time this is distributed—and I’m sure the first thing on everyone’s mind is turkey, stuffing, mashed …

RR photo by Hunter Hill
Whether you like lamb or not, it sure looks delicious and beautiful.
Posted Wednesday, November 23, 2022 1:50 pm

Lasagna by Dad
By HUNTER HILL

Well, it’s Thanksgiving—or likely a day or so afterward, by the time this is distributed—and I’m sure the first thing on everyone’s mind is turkey, stuffing, mashed potatoes and gravy.

What to do with all these leftovers? Well, at the risk of causing anyone some PTSD by rehashing the holiday staples, I’ve decided to change the topic entirely. Let’s cook some lamb!

That’s the line my wife gave me, as we have begun to eye the freezers we’ve been working to fill over the last year. We didn’t raise lamb ourselves, but a friend gave us some because they had a little too much for their freezer. Not being greedy we humbly accepted some shanks, since they aren’t considered a prime cut. They’ve been sitting patiently in our freezer for a few months.

Fortunately, my wife has a knack for Pinterest and cooking, and consequently found a good-looking recipe for lamb shanks. It’s been quite some time since either of us ate lamb and I’ll admit this isn’t the most simple recipe, but it also doesn’t take a master chef to accomplish. What it does take, however, is a healthy serving of time and patience.

I had nearly forgotten the brief announcement that we were going to have lamb for dinner, until I came home and opened the fridge to a large covered bowl of chopped vegetables topping the shanks and soaking in wine. We had half a bottle of merlot just asking to be cooked off, so it was an excellent time to use the shanks.

A day or so later, I arrived home with our boys to the smell of seared meat and aromatic red wine wafting all the way outside the house. Nothing makes you anticipate a meal like smelling it before you even go inside. But after going in, I was kindly informed it would be another two hours before the meal would be complete. The meat and red wine sauce were baking in a ceramic-coated Dutch oven, which prevented me from even peeking at it before it was ready. Fortunately, I had to go to church that evening, so it helped take my mind off the arrival of the much-anticipated meal.

A few short hours later, I walked into the fragrant house once again; my wife had stayed home to supervise the completion of the dish. I was ready to sink my teeth into some hearty lamb shank. She had made mashed potatoes as a bed beneath the sauce-covered shank, which proudly protruded from the center.

It was finally ready.

Now as I said, it had been a while since I’d had lamb, and then it wasn’t shank, so I had little idea what to expect. We each took a fork and pulled away a tender strip of meat, swiped it in a bit of extra sauce and took our first bites.

My wife hastily took another and another, eating her fill and enjoying the fruits of her hours of labor.

I hesitated. I took another bite, then ate some potatoes and took another. The sauce was delicious, the potatoes on point. The meat… was well cooked. However, I didn’t like it.

Don’t get me wrong, the dish was executed well and clearly, my wife had a taste for it, but lamb typically has a flavor from the lanolin in their skin. While I try to give everything a chance, it was not a flavor built for my palate.

The way out here, we try anything once, but not everything twice. They can’t all be winners, but to be very honest, it was a matter of me not liking the lamb flavor more than an issue with the recipe.

Given my wife’s opinion, if you like lamb, the recipe is surely worth an attempt. And if you’ve never eaten lamb before, I’d go so far as to say the sauce is worth giving this a good try. 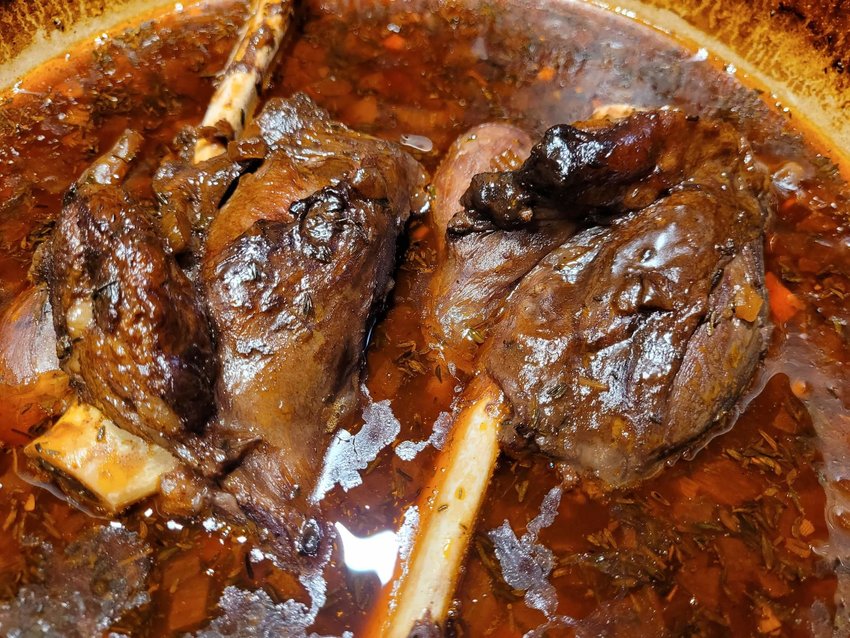 Lamb shanks are tempting in a red wine marinade.

Have-a-heart, not my chickens

Adventure with a side of… ?