Honey wheat bread, perfect for any spread
By HUNTER HILL

It’s October, and all anyone thinks about is scary food. Food that looks scary, food that sounds scary, and food that might be scary to prepare.

As it turns out, there’s something scarier than all that, and that’s a dad left to his own devices in the kitchen while mom’s away on business.

Let me set the scene for you.

It was a dark and not-so-stormy night. In fact, it seemed to be pretty fair weather outside. However, inside was a more tumultuous environment. As I juggled a 10-month-old in one hand, feeding him cottage cheese and milk in between cries, I attempted to also focus on a conversation initiated by my three-year-old in the next room. He was asking/demanding answers about the cartoon he was watching.

As I pushed some of the mess off the counter and attempted to clean a dish or two, I considered what options I had to prepare dinner for the boys. In that moment, I decided two things. First, I was going to attempt to make lasagna, even though I had never made it by myself before. Second, I was going to make a few hot dogs to tide my lovely urchins over, since I was pretty sure it takes about three hours to make lasagna.

If the decision to make lasagna wasn’t enough, at the late hour and in the midst of toddler turmoil, I made another decision that was perhaps equally scary. That was to ignore the many lasagna recipes available to me via the internet and the cookbooks we have on hand.

That’s right, never made a lasagna before, but I was going to take a stab at it without true directions to follow. 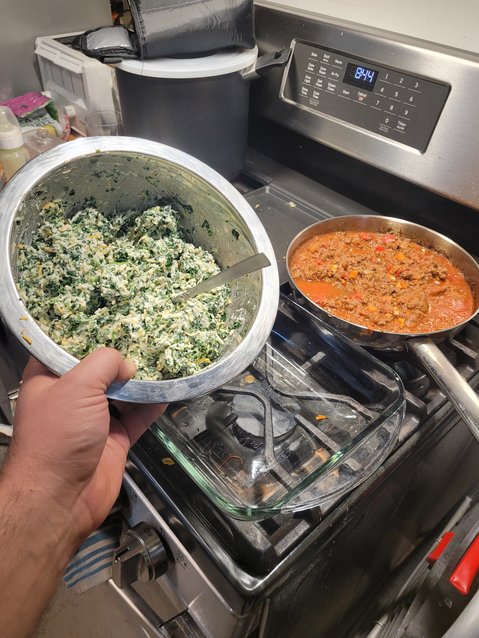 The cheesy stuff and the beefy stuff. 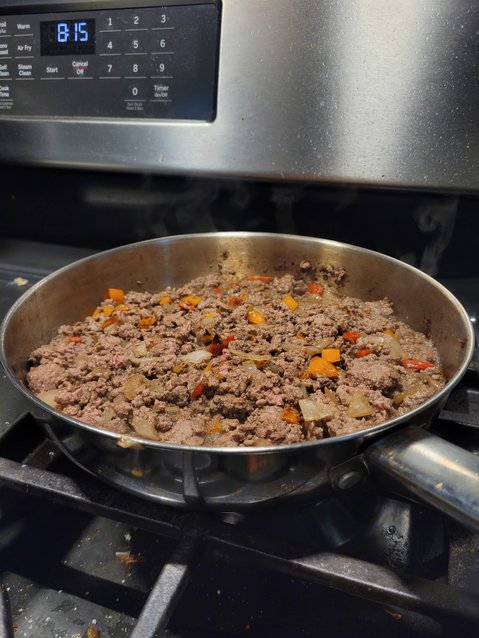 If you’re an optimist like me, you’ll understand the supposed advantage was that if you have no clear target, how can you say you missed if something were to go awry?

So with my positive attitude, uncertain decision-making skills and naïveté, I began what was to be a scary take on lasagna by a dad. I can feel the judgment of all pasta lovers upon me even as a write this.

Well, to properly earn the scowls and deepen the horror, I will share my favorite and most abhorrent hack right off the bat: I used oven-ready pasta. I know the sacrilege, but guys, lemme tell ya, why cook pasta when you don’t have to?

So there I was with my plug-and-play ingredients, about to blaspheme the entire country of Italy, when I suddenly realized I was out of mozzarella cheese. But guess what I did have? Cheese sticks. You heard right, the rejects of my son’s snack time were about to make a debut as the melting face of a lasagna that only Dr. Frankenstein could love.

All I knew about lasagna was that you needed two major components besides the pasta layers—a meat sauce and a cheese filling. My wife always throws spinach into her lasagna, so I did too, just to impress her with my usage of a green ingredient. If my kids were any older, perhaps they would see that as the scary part, but honestly you don’t see it by itself, so it’s a tasty way to sneak in some good veggies.

Once I had my meat sauce and cheese filling made, I assembled and baked, making sure to check as the cheese sticks melted on the surface. While I checked plenty of times in that first hour, I forgot for a time after that, and ended up with a slightly overcooked dish of lasagna.

The way out here, we don’t always cook like Ree Drummond, the Pioneer Woman, with her fancy snacks and perfect execution, but even a scary monster of a lasagna, fashioned by a crazy sleep-deprived dad, can do the job when it comes to getting food in bellies. To be honest, we loved it, and the flavor overshadowed the flaws. So to my fellow dads out there: take a crack at it, and when anybody says something, refer them to the quack who stumbled his way through this recipe in the first place.