HONESDALE, PA — It’s a harsh truth. Rural Americans—over 15 percent of the U.S.—are older, sicker and poorer. Wayne County is no exception. But, some observers say, Wayne …

Photo contributed from the Wayne Memorial Hospital website.
Posted Wednesday, January 5, 2022 8:49 am
What is PORH?

The Pennsylvania Office of Rural Health (PORH) is focused on increasing access to health care services in rural areas and enhancing the health of rural residents. It provides resources and technical assistance to both the state and to communities, addressing rural health disparities.

Learn more about the organization, and explore its rural health data at https://www.porh.psu.edu/.

HONESDALE, PA — It’s a harsh truth. Rural Americans—over 15 percent of the U.S.—are older, sicker and poorer. Wayne County is no exception. But, some observers say, Wayne Memorial Hospital has been spearheading change, much of it under recently retired CEO David Hoff. In an interview before his retirement, he weighed in on the successes and problems.

The effect of COVID-19 has already been discussed in a previous story. But rural health had its own pre-existing conditions.

The hospital and the county healthcare system as a whole have had a long list of problems to deal with, even before the pandemic. It’s all typical of rural America. “Older, sicker and poorer” is shorthand for a complex geographic, demographic and economic situation.

The Pennsylvania Office of Rural Health (PORH) offers an array of information and analyses of the state of rural health, useful resources for advocates, and keeps track of what’s working as healthcare deals with the challenges.

Rural America’s grim numbers
Older—19 percent are 65 or older, v. 15 percent in urban areas. Rural counties make up nearly 85 percent of the 1,104 “older-age counties,” where more than 20 percent of the residents are age 65 and up. (usda.gov)
Sicker—In 2019, according to a CDC databrief, rates for the 10 leading causes of death were higher in rural areas than in urban areas, with the greatest difference in death rates from heart disease (189.1 v. 156.3), cancer (164.1 v. 142.8) and chronic lower respiratory disease (52.5 v. 35.4.) (All rates per 100,000.)
Poorer—The poverty rate in rural America was 15.4 percent in 2019, v. 11.9 percent in urban areas. To make matters worse, a 2018 report from the Economic Innovation Group found that only 20 percent of rural counties added net businesses between 2007 and 2016. Growth, it found, was mostly in urban, densely populated areas. The USDA, in its “Rural America at a Glance” report, found that “residents who live in smaller and more isolated rural settings often face greater difficulties accessing provisions and services or commuting to work, among other economic development challenges.”
Opioids— According to the CDC, the rate of drug overdose deaths increased from 6.4 per 100,000 to 22 in urban counties and from 4 to 19.6 in rural counties. But Jamey J. Lister et al. in 2019 found that treatment is harder to come by in rural areas, with longer travel times, more concerns about cost, fewer prescribing physicians and fewer medication-treatment clinics.

On average, according to PORH, rural residents “are older, prone to health issues, and financially disadvantaged. Access to health care is often limited, and policies aimed at improving access don’t always have the same impact on urban and rural residents.”

Winter travel can be hazardous, limiting trips to the doctor. There are educational and employment disparities and the “economic hits to manufacturing and industry sectors have taken a toll on already impoverished residents.”

Robin Warshaw, in a 2017 post for the Association of American Medical Colleges website, points out the long distances that rural residents must travel to get care. “That means taking hours off from work for an initial appointment or follow-up, which causes many to delay or avoid care.”

For much of Hoff’s time at the hospital, Wayne Memorial has been moving certain aspects of patient care into the community. Payers drive part of that; outpatient care is less expensive than in-patient hospital treatment. It doesn’t involve a stay in a facility and treatments are simpler. Think simple surgery, like bunion removal; physical therapy; or a great deal of mental-health care.

“There is a national movement from volume-based care— ‘heads in beds’—to value-based care, which focuses on the optimal care provided to a patient or population to increase the health of the entire community” said Lisa Davis, PORH’s director and a professor of health policy and administration. “Value-based care can incentive hospitals to realign how, and what, services are provided to the community.”

Blood can be drawn at accessible clinics. Physical therapy can be done in a separate location. Mental health problems can be treated closer to where people live. Many issues can be addressed through telehealth. Healthcare is spread out. It’s a beginning.

Of course, communities vary. Wayne County has a busy behavioral health department, cardiologists and other specialties.

Even so, in a recent interview, Hoff talked about the challenges of staffing. “We need 20 more full-time RNs, three or four respiratory therapists, pharmacists. And support staff, maintenance and dietary.”

That work is ongoing and reflects a connection between the hospital and economic development. Bring more people here. More doctors, more nurses. “If you want to grow the hospital, you need more people,” Hoff said.

Economic development comes into play. Expanding Wayne County’s many attractions would draw more doctors as well as members of other professions.

It would also help the bottom line.

Rural areas throughout the country have a higher population of patients on public insurance—Medicare or Medicaid. Those programs pay less to the facility and the practitioner than does commercial/employer-based insurance. If larger businesses, offering comprehensive commercial insurance, hire people in Wayne County, payments could increase too.

But Wayne Memorial has taken steps, bringing in doctors and more services and finding other sources of funding.

Ask Hoff what was successful and he talks about his team and the decisions the hospital board made.

Like pursuing a federally qualified health center (FQHC) designation for the outpatient physician-staffed clinics. That part of the county’s healthcare system is now known as Wayne Memorial Community Health Centers and is headed by Fred Jackson.

The designation matters. An FQHC receives funds from the Health Resources and Services Administration (HRSA) to provide primary care in underserved areas. Services have to be provided regardless of ability to pay; a sliding-fee scale has to be available. The governing board has to include patients, according to the HRSA website.

But there are many advantages too, Hoff said.

The free malpractice insurance “saves half a million each year,” he said.

“I told, we had to be innovative or we would wither on the vine,” Hoff said.

Both statewide and locally, “the rural healthcare-delivery system provides high-quality affordable care,” Davis said. “Those who work for these hospitals work hard to provide the best care.”

Recognition
In November, Pennsylvania Office of Rural Health (PORH) Director Lisa Davis presented Wayne Memorial Hospital’s outgoing CEO David Hoff with the Community Rural Health Leader of the Year award for 2021.
“He’s made an enormous impact,” she said. “His focus on the community and how the health system can support identified needs is important, since leadership in the C-suite sets the tone for the health system as a whole… [he] prioritized the needs of the community so that the hospital and health system can serve the residents of the county.”

Rural hospitals work together, too. At times during the pandemic, patients have had to be transferred to other hospitals throughout the state and even out-of-state. Sometimes the hospitals are full; sometimes the needs of the COVID patients require the available staff. But rural hospitals “are sharing information, receiving significant infusions of support from federal and state governments,” she said. There are vaccines. PPE is available.

“All of this… is working together in a coordinated system,” she said.

And so is Wayne Memorial. “We have a great team,” Hoff said. “We think we’re innovative.” Team members have scope to work; they talk often. “I have open doors. We work really well together.”

“I always say that if you  leave a place, make sure it’s in better shape than when you got there.” And, he said, he thinks he did. 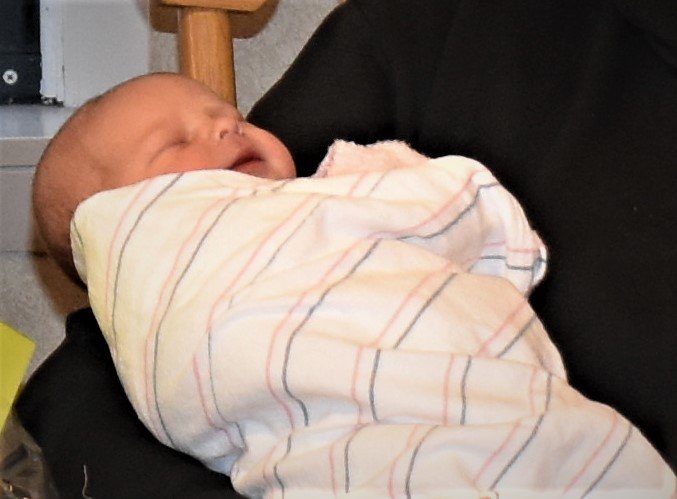 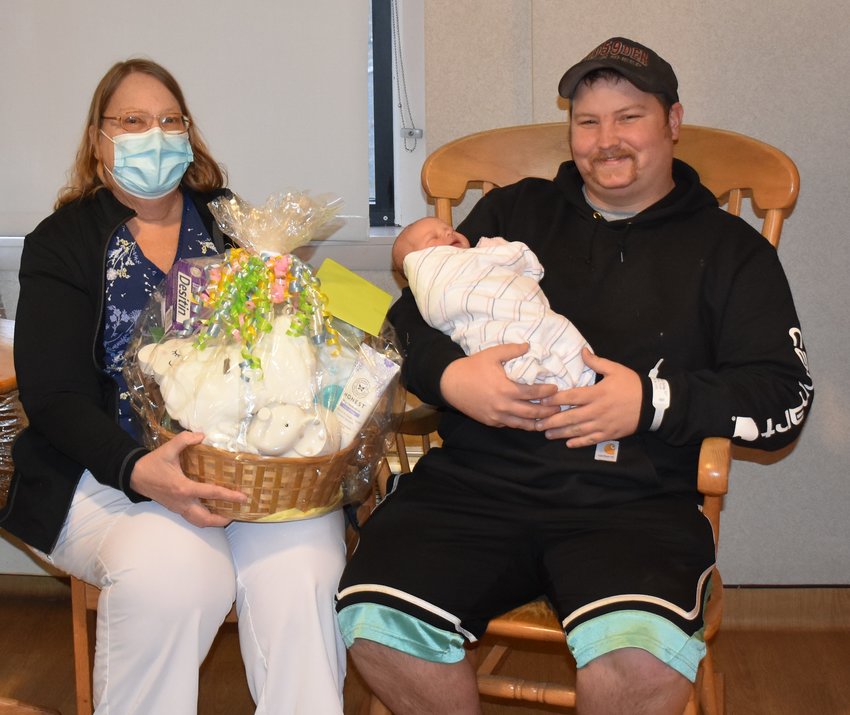 Dixie Lynn Reese, first baby of 2022, is held by her dad, Austin. Joyce Bannon, RN, holds a gift basket from the New Beginnings staff.
Previous Next

The first baby born in 2022 at Wayne Memorial Hospital is Dixie Lynn Reese, daughter of Tia Franklin and Austin Reese of Waymart. She entered the world at 7:51 p.m. on January 1; at birth she was 19.5 inches long and weighed 7 pounds, 2 ounces.

Every year at this time, the New Beginnings staff presents a basket of goodies to the family of the first baby of the new year. Tia said “everything went well” and Dixie has joined her big sister, four-year-old Dalilah, at home.