HIGHLAND, NY — Members of the team behind Camp FIMFO appeared at the Cedar Rapids restaurant on September 15 to give a presentation and answer questions from the public. The information session …

HIGHLAND, NY — Members of the team behind Camp FIMFO appeared at the Cedar Rapids restaurant on September 15 to give a presentation and answer questions from the public. The information session was hosted by the Sullivan County Partnership for Economic Development.

Northgate Resorts, a national family-resort corporation, has embarked on an approximately $44.9 million dollar renovation of the former Kittatinny Canoes in Barryville. The rebranding will add the campground to Northgate’s chain of Camp FIMFOs (Fun Is More Fun Outdoors).

Around 75 people showed up, asking questions and expressing concerns at what community members have called the biggest project ever in the Upper Delaware River Valley.

Members of the public have raised concerns about the pool proposed for Camp FIMFO: there was uncertainty about how big the pool would be, whether it would be a “water park” or something smaller.

Calling the proposed pool a “water park” would be a misnomer, Northgate representatives told the public. The proposed water feature included a shallow splash pool with a children’s playground structure, two small slides and a lounge pool around 3.5 feet deep. The pool structure didn’t exceed 35 feet, and it didn’t include the lengthy slides more typical of water parks.

Northgate representatives didn’t address the potential risks, raised by the advocacy groups Delaware Riverkeeper Network (DRN) and KNOW FIMFO, of chlorinated water as a contaminant in case of flooding, though they did say the water would be only lightly chlorinated. They said that the pool was non-negotiable: they considered it an integral part of the Camp FIMFO experience. According to neighboring canoe livery operator, Rick Lander, Kittatinny historically had a pool that they had closed. 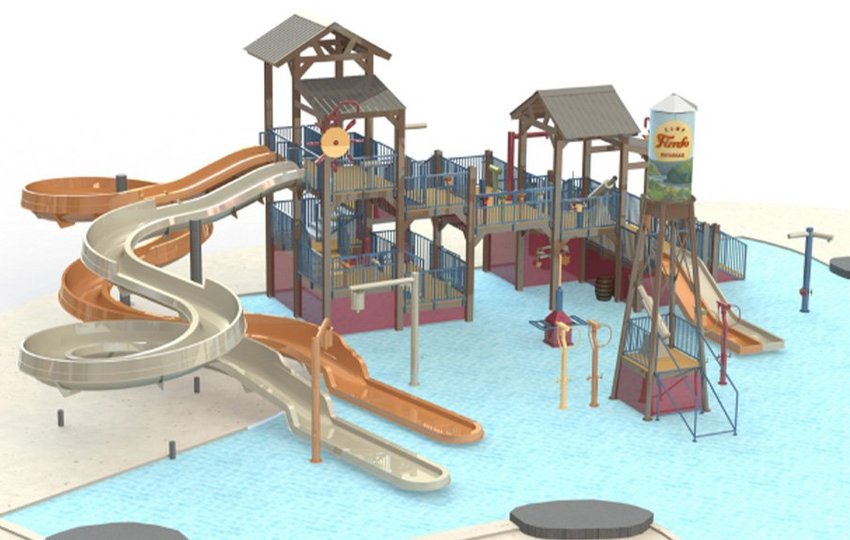 A conceptual rendering of the Camp FIMFO pool area.

Unlike the pool, the proposed “mountain coaster” was negotiable: the Camp FIMFO experience did not require that amenity. (The public in attendance met that pronouncement with applause). Northgate did intend to include it in its proposal.

A mountain coaster, as defined by alpinecoasters.com, takes advantage of an area’s natural terrain for a less-obtrusive experience than a typical roller coaster would provide. Passengers ride a bobsled-like cart down a track, with the track hugging the ground in such a way that gravity pulls the cart along.

The mountain coaster proposed for Camp FIMFO would not be more than about 10 to 13 feet above the ground, would not be visible from Route 97, and would have a minimal impact on the area’s wildlife, topography and the like, said Northgate representatives. Mountain coasters, representatives said, were generally pinned to the ground and used by ski resorts in the summer. The coasters are also installed in national and state parks, they said.

Amenities like the coaster and the pool and the scale of Northgate’s investment had raised concerns among the community that more people would come to Camp FIMFO than had come to Kittatinny Canoes.

Northgate planned to increase the length of time people stayed, not the numbers of people who stayed, said representatives. The proposed campsites would reduce maximum occupancy by around 17 percent, but more families would stay through the week rather than coming just for the weekend.

This shift in Northgate’s strategy appeared to confirm another community concern—that Camp FIMFO will appeal to a far different audience than currently frequents Kittatinny Canoes. “[T]he transformation from tent sites to RV and glamping will clearly price-out large segments of the population,” wrote the DRN and KNOW FIMFO in an open letter. 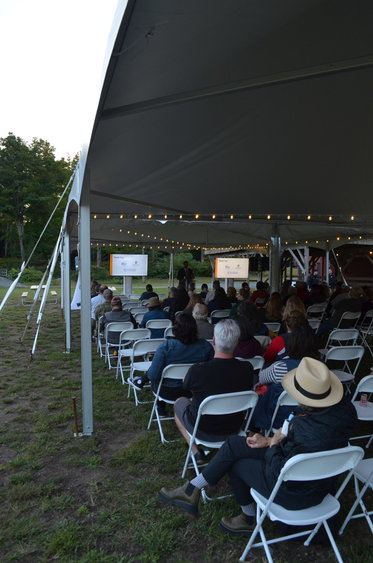 Around 75 people showed up to hear a presentation from Northgate Resorts about its plans to turn Kittatinny Canoes into Camp FIMFO.

Alex Betke, attorney and registered lobbyist with Brown and Weinraub.

In addition, the 89 full-time-equivalent (FTE) jobs created at Camp FIMFO would bring over $2.5 million in annual wages; there would be nine new managerial positions. Representatives did not break down the specific hours and positions that would total 89 FTE positions (a single FTE job is defined as a year’s worth of 40-hour weeks.) When asked about current jobs, representatives said that there were 70 FTE jobs.

The public pressed on another economic point at the presentation: what kind of Payment in Lieu of Taxes (PILOT) agreement did Northgate want?

PILOT agreements (often conducted through the IDA) include exemptions from property taxes, sales taxes and mortgage taxes. An applicant has to make a payment in lieu of its exempt real estate taxes, distributed to the taxing jurisdictions—including the town—involved. An applicant still has to pay special assessments like fire, ambulance, library and sewer district bills on the new assessed values. Generally PILOT agreements pay the current real estate tax assessment, with the improvements becoming real estate tax ratables, phased in by formulae over a specific period of time, often 10 years.

Northgate representatives stressed the measures taken to make Camp FIMFO safe for campers and for the community.

Northgate had hired private security for Kittatinny Canoes; representatives said it had a reputation as a “party campground.” The company expected Camp FIMFO to cater to a different, more family-friendly audience, and would enforce hotel-standard 11 p.m. quiet hours.

Every camper would get a life jacket and a pamphlet explaining the dangers of the river, measures initiated in part in response to the five drownings that took place in Kittatinny waters in 2021. In addition Northgate was in talks with local fire departments to support them, said representatives, though they denied that Northgate bore sole responsibility for the area’s taxed EMS squads, which expressed concerns over increased coverage responsibilities in-season.

The public present asked about the green measures Northgate would consider for Camp FIMFO—would its power be renewably generated? Would they implement recycling? Separately, the Sullivan County planning division recommended that Northgate install charging stations for electric vehicles in its parking lots.

Northgate representatives pointed to a pre-existing Kittatinny Canoes tradition, and the annual litter sweep, and said the campsite would practice single-stream recycling. They offered no structural commitments to sustainability beyond that.

Advocates pointed out discrepancies between how much water the campground planned to use and how much water its wells were designed to generate. “FIMFO says that estimated water usage will be 25,000 gallons per day (GPD), and yet the project is designed for 40,000 GPD,” wrote KNOW FIMFO and the DRN.

New York State regulations require a campground to have a certain amount of water available—100 gallons per site per day—said Northgate representatives. That accounted for the larger figure; the smaller figure more accurately represents Northgate’s expectations for Camp FIMFO’s water usage, they said.

The Town of Highland Planning Board will hold a public hearing on September 28 at 7 p.m. at the town hall at 4 Proctor Rd. in Eldred. The board will have 62 days from that public hearing to make its determination and set conditions for approval of the site plan.

The future of Catskill Mountains Resort