The wonders of the Delaware

Seeing the river with new eyes on the Delaware River Sojourn

DELAWARE RIVER — For paddlers participating in the 27th annual Delaware River Sojourn, an eight-day journey along the Delaware River, a stop at the Kittatinny Point visitor center highlighted …

The wonders of the Delaware

Seeing the river with new eyes on the Delaware River Sojourn

Photos contributed by the Brodhead Watershed Association
More than 100 kayakers on the 27th Annual Delaware River Sojourn, an eight-day journey along the Delaware River, stopped at the Kittatinny Point Visitor Center for lunch and to learn more about the Delaware Water Gap National Recreation Area.
Posted Tuesday, July 12, 2022 12:34 pm

Respect the river
By CHRIS MELE, for Brodhead Watershed Association

DELAWARE RIVER — For paddlers participating in the 27th annual Delaware River Sojourn, an eight-day journey along the Delaware River, a stop at the Kittatinny Point visitor center highlighted the benefits of breaking from the man-made world and being immersed in the natural one.

More than 100 kayakers, some who came from as far away as Kentucky and Michigan, pulled onto the beach at the center to rest, have lunch and hear about the Delaware Water Gap National Recreation Area, a unit of the National Park Service (NPS) that straddles parts of five counties in New Jersey and Pennsylvania.

As kayakers gathered under a pavilion to eat and learn more about the area from an NPS ranger, the loud rumble of trucks echoed off nearby I-80, underscoring how much perspective can change by traveling along the serene scenery of the river versus the asphalt-topped roadway with its heavy traffic.

Nancy Harney of Milford, PA, was on the sojourn with her cousin Veronica Horn, of Wilmington, NC. They were both first-timers.

“Oh my gosh, it’s eye-opening,” Horn said. It’s one thing to drive on the highway that hugs the river, but being on the water offered a whole new appreciation for what nature has to offer, she said.

“It’s breathtaking,” she said of what she described as the “crystal-clear water” and the discovery that eagles populate the river corridor.

Chance Babish, an interpretive river ranger with the National Park Service (NPS), led the paddlers in an exercise to better understand how their perspective could change upon further inspection. Relying on a prop—a cardboard “door” with a cutout window—he asked a volunteer to look through the window and count how many people she could see seated in the pavilion. She then took a few steps back, and, as her perspective through the window changed, she could see a great many more people.

Such is the experience of being on the river, Babish said, adding that he even noticed a difference in perspective after being on a stand-up paddle board instead of in a kayak. 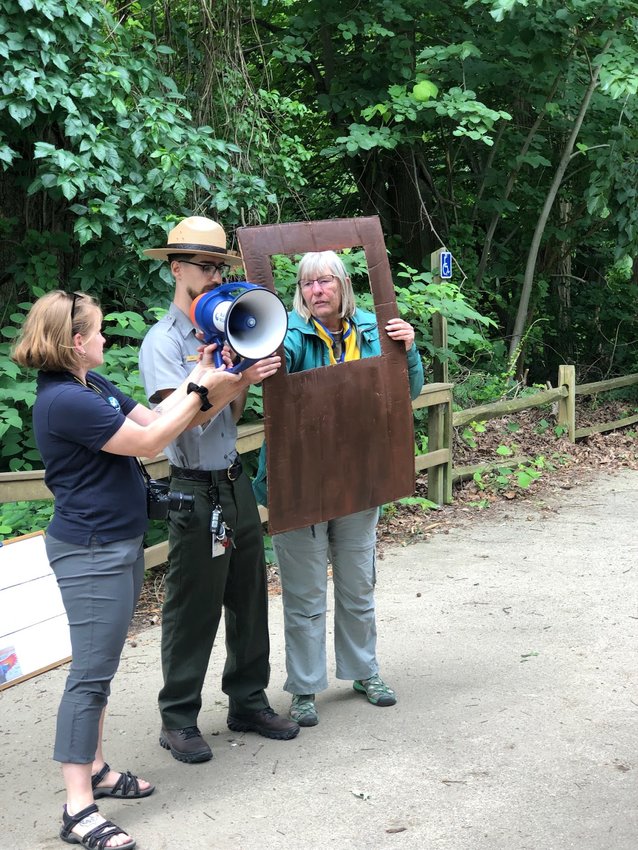 Chance Babish, an interpretive river ranger with the National Park Service, led the paddlers in an exercise to better understand how their …

Visitors, he said, might come to Kittatinny Point to use the restrooms, picnic and access the river and think that represents the totality of the Delaware Water Gap National Recreation Area. What they don’t see is that the recreation area is made up of 70,000 acres boasting a rich cultural history, trails, waterfalls and an abundance of wildlife.

Among other highlights, the area features one of the oldest commercial roadways in the country, Old Mine Road, which was built in the 1600s, and Raymondskill Falls, the tallest in Pennsylvania, he said.

“Visitors are often pleasantly surprised when they realize what the park has to offer,” he said.

The middle two days of the canoe/kayak/camping sojourn, held on June 20 and 21, stretched from Bushkill, PA, to Worthington State Forest, NJ, and then to Ramsaysburg Historic Farmstead, NJ.

The theme of this year’s trip was “The River Rocks” and included educational programming about the unique geology of the Delaware River Basin.

In addition to taking in the natural setting of the river, paddlers got a glimpse of unique manmade structures as well, said Troy Bystrom, a sojourn registrar. Among them: an abandoned railroad viaduct built in the 1920s, heavily covered in graffiti and known locally as “Alice in Wonderland.” The viaduct, which is between Mount Bethel, PA, and Columbia, NJ, gained its nickname because visitors have to go through a manhole to access it, much like the rabbit hole in “Alice in Wonderland,” Bystrom said. (He was quick to add that the site was off limits and he was not encouraging trespassing.)

On the sojourn was Alex Jackson, executive director of the Brodhead Water Association, a partner in the Poconos-Kittatinny cluster of the Delaware River Watershed Initiative, which works to protect and enhance the resources of the Upper and Middle Delaware Rivers, and supports the sojourn.

“We’re here all to celebrate the natural resources in the Upper and Middle Delaware,” which enjoys excellent water quality because it is so heavily forested, Jackson said.

He spoke with pride and wonder at spotting so many mayflies and stoneflies, which are pollution-intolerant. That there was such a robust population of the insects is a “testament to the health of the water,” he said.

The sojourn honored Sherry Acevedo with a High Admiral Award for a lifetime of work dedicated to conservation. Acevedo sported a cap with golden braids on the brim bestowed to her as part of the award. She said she was deeply honored—and surprised—at the recognition.

Acevedo, who is the conservation coordinator for parks and recreation for Northampton County, PA, has led land -protection efforts over a career spanning three decades, including spearheading the Delaware River Water Trail from Hanock, NY, to Trenton, NJ, preserving open space and gaining grants for land acquisition.

At the Wildlands Conservancy, she created and established the D&L Trail Tenders, a trail-maintenance program for the 165-mile D&L trail from Wilkes-Barre to Bristol, PA, and worked as a resource conservation specialist with the Delaware & Lehigh National Heritage Corridor, where she managed the Lehigh Valley Greenways Conservation Landscape Initiative.

Elizabeth Koniers Brown, the director of external affairs and communications for the Delaware River Basin Commission, was on her first river sojourn. She said the trip connected people to the natural resources of the river and the basin as a whole.

“There is no better way to appreciate it than to experience it,” she said.

Another paddler, Dan Okrent of Hempstead, Long Island, has been participating in the sojourn since 2004. Okrent, 68, said he’s been paddling since boyhood, so spending time on the river was a natural extension of his interest in being on the water.

“It’s nature, it’s exercise, it’s environmental education,” he said as he waited on line for lunch.

About an hour later, the lunch break had ended and the sojourn was ready to resume.

As Dejay Branch, another sojourn registrar, called on the paddlers to get their “booties in the boats,” the kayakers gathered at the shore and shoved off, headed to the next leg of their adventure.

Visitors association honors its own

Help when you need it