A jar of Golden Blossom honey, with its green and gold label, was always in a cupboard in the kitchen of my childhood. We didn’t reach for it often. In winter, I would drizzle it over a bowl of …

A jar of Golden Blossom honey, with its green and gold label, was always in a cupboard in the kitchen of my childhood. We didn’t reach for it often. In winter, I would drizzle it over a bowl of farina, cream of wheat or oatmeal at breakfast. If one of us kids had a sore throat, Mom would present us with a mug of boiled water into which she had squeezed a lemon wedge before adding a heaping teaspoon of honey. It was a soothing natural remedy that did the job.

At the Jewish New Year, Rosh Hashana, it is customary to dip sliced apples into honey, a ritual symbolizing the wish for a “sweet” new year.

Though I am not an observant Jew, there is something that nags at me every autumn when Rosh Hashana rolls around to partake in this custom. My nephew, his wife and our sister-in-law all present us with a bottle of honey each New Year.

This year, Wendy, my deceased brother’s wife, gave us a jar of raspberry blossom honey. The flavor was different from any honey I’d ever tasted. It had depth and nuance, a unique flavor. 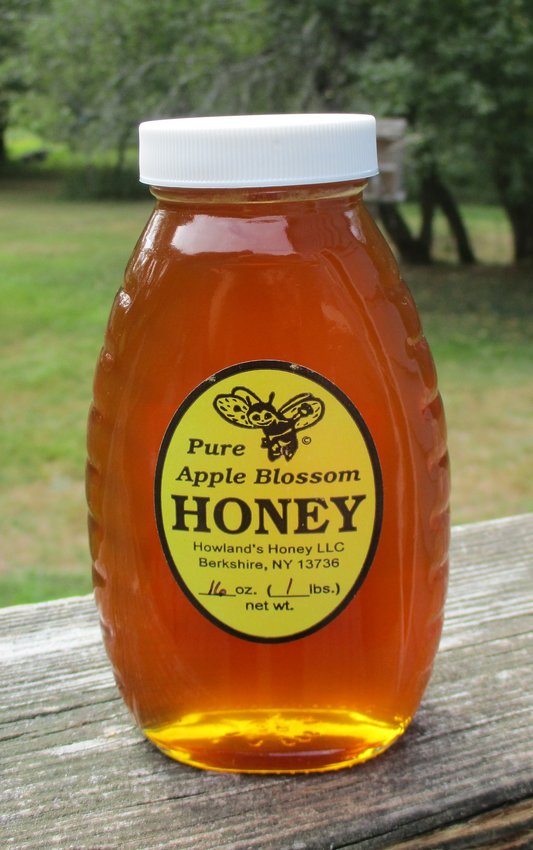 It wasn’t until midlife that I discovered that honey came in different flavors, and that the taste of it depends on the type of flowers within roughly two miles of the hive that produces it. Apparently, honey bees have an average foraging radius of two miles, and the type of flower from which the bees gather nectar directly influences both the flavor and color of the honey they produce. Who knew that the Golden Blossom honey Mom bought at the local supermarket is a blend of three pure honeys: orange blossom, sage buckwheat, and extra white clover?

I did a little research on the kinds of honey and found interesting descriptions of their flavors, and suggestions on how they may be used. The varieties include acacia, alfalfa, blackberry, buckwheat, orange blossom, eucalyptus and blueberry, to name a few. Different flavors are recommended for a drizzle on pancakes, medicinal use, slathered on biscuits, in baking and, always, a spoonful in tea.

I am not much of a baker, but use honey in savory preparations such as salad dressings and marinades. A favorite salad dressing is one made from both grainy and smooth Dijon mustard mixed with honey, along with champagne vinegar and extra-virgin olive oil, sea salt and freshly ground black pepper. This particular vinaigrette is delicious on greens that are on the bitter side, such as arugula, Belgian endive, radicchio and slivers of fennel. My winter citrus salad of ruby red grapefruit, tangerines, navel oranges and minced shallots gets a kick of sweetness from the honey added to the dressing.

Proteins benefit from being marinated prior to slapping them on the grill, or before pan-frying, baking or broiling. Honey plays an integral role in many recipes I’ve made. It is a necessary component in my homemade barbeque sauce and I broil salmon filets with honey, butter and mustard. I like to smear boneless pork chops with a mixture of honey mustard prior to dredging them in fine, flavored bread crumbs before pan-searing them. And my favorite marinade for my “finger-lickin’ chicken wings” uses soy and hoisin sauces, Asian sesame oil, garlic, ginger and honey.

When I Googled “marinades made with honey,” a beekeeper’s site popped up. It offered a honey-lime marinade with lime juice, soy sauce, coconut milk, ginger and spicy sriracha chili sauce, and was suggested for use with shrimp, pork tenderloin or salmon. Another marinade, honey balsamic—which included Worcestershire sauce and a touch of hot sauce—is supposedly good on steak, and a honey sriracha marinade with apple cider vinegar and soy sauce is good for use with tofu, cod or vegetables.

This morning I concocted a marinade for chicken thighs. I consulted no cookbooks or food blogs. This one came straight from my imagination. The ingredients include honey, naturally; citrus marmalade; lemon zest and juice; mango chutney and grated fresh ginger. I baked the thighs at a high temperature, then broiled them for a few moments to crisp the skin. I placed them on a platter and garnished each with slivered, toasted almonds and chopped fresh parsley. They were a revelation—delicious!

As for the “nectar of the gods,” this sweet delicacy has been around for centuries. The ancient Greeks, Egyptians, Sumerians, Babylonians, and Romans viewed bees as messengers of the gods, thus elevating bees to the status of royalty.