The great thing about growing up in my neighborhood in Liberty, NY, was that there were always other kids around—a lot of other kids. Let’s just say that we never had to worry about …

The great thing about growing up in my neighborhood in Liberty, NY, was that there were always other kids around—a lot of other kids. Let’s just say that we never had to worry about scaring up enough players to populate two softball teams.

One of my favorite memories has to do with just such a time. Only we weren’t playing softball. We were playing hide-and-seek.

My neighborhood was popular, partly because there were several fields near to our house. The one across the street from me was overgrown—a prime hiding place, for sure. 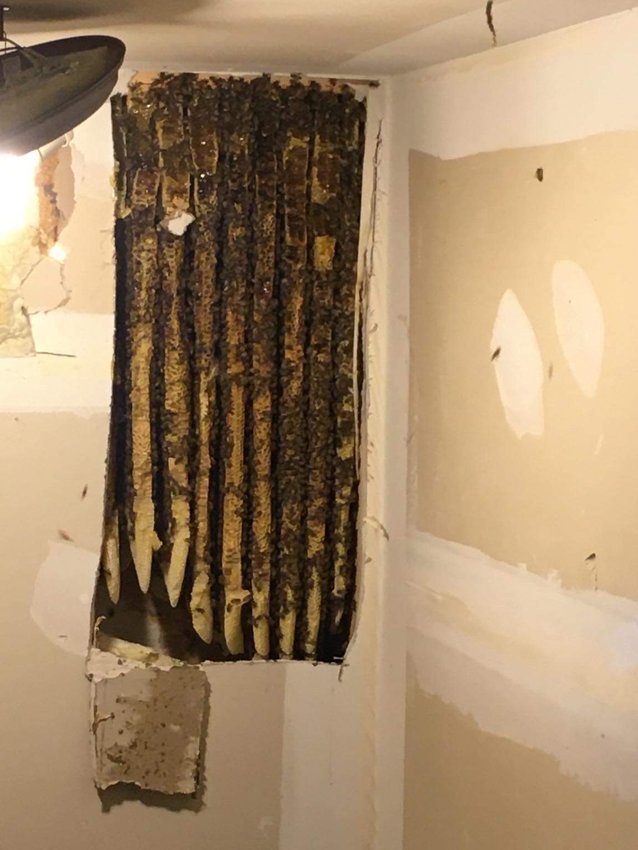 Honey bees lurk in a wall.

On this particular day, I was chosen first to be It. So, I turned my back on the other 12-year-olds, and began counting slowly while they scattered:

Suddenly, my count was interrupted by various shrieks coming from the overgrown field:

“Look out—you stepped on a beehive!”

Within seconds, at least six of my friends burst out of the field and flew frantically down the road, followed by a swarm of what were suddenly homeless—and certainly angry—bees. Since none of the bees came after me—a benefit of being It first?—I laughed and laughed and laughed.

And my respect for bees grew.

As time has gone on, I’ve managed to learn about bees and the honey they make. I’m a proponent of treating allergy symptoms with local honey. The idea is that, in eating local honey, we’re also eating local pollen. Over time, this might make us less sensitive to the adverse effects pollen can create. I think of it as Mother Nature’s allergy shot. My husband is quick to point out that there are conflicting scientific studies regarding this claim. But I know my body and my allergy symptoms, and I know how local honey eases the severity for me, at least.

Mother Nature’s allergy shot or not, I’m grateful that I have friends like Debbie and Dwayne LaBagh from White Sulphur Springs, who keep bees. They endure any number of random stings to produce delicious honey that they’ve graciously gifted me from time to time. They also have stories—many stories—about the behavior of honey bees. One in particular stands out in my mind.

It seems that some other friends of the LaBagh’s were plagued by honey bees in their house. They managed to trace the entry point to some holes in the Sheetrock in their basement. Pulling back the rock, they discovered that the bees had destroyed the insulation and replaced it with honeycomb—an entire hive’s worth!

Devoured insulation or no, September is the month of the Honey Bee Festival (September 24 and 25) in Narrowsburg, so I thought these honey cupcakes would be a great project for this edition of the River Reporter. They’re delicious, easy to make, and even easier to enjoy, especially after a game of hide-and-seek on a chilly night.

Just don’t step on a beehive.

Kim M. Simons is a multi-award-winning artist, food artist, and cake artist. She and her team—the Bah Hum Bakers—were champions on Food Network’s “Holiday Wars” in 2019. More recently, Kim’s team—Ghost with the Most—were finalists on “Halloween Wars.” Kim’s cookbook of gluten-free recipes, “Get All Cook-y With Kim,” is available on www.amazon.com. Kim also teaches classes. Visit Kim at www.cakesbykimsimons.com. 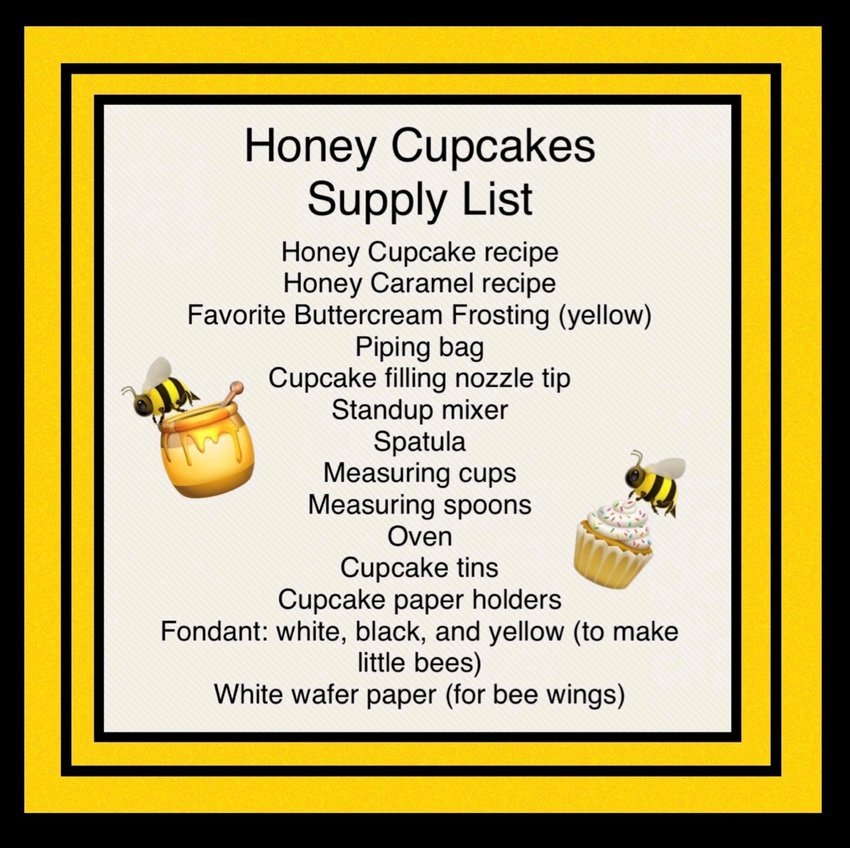 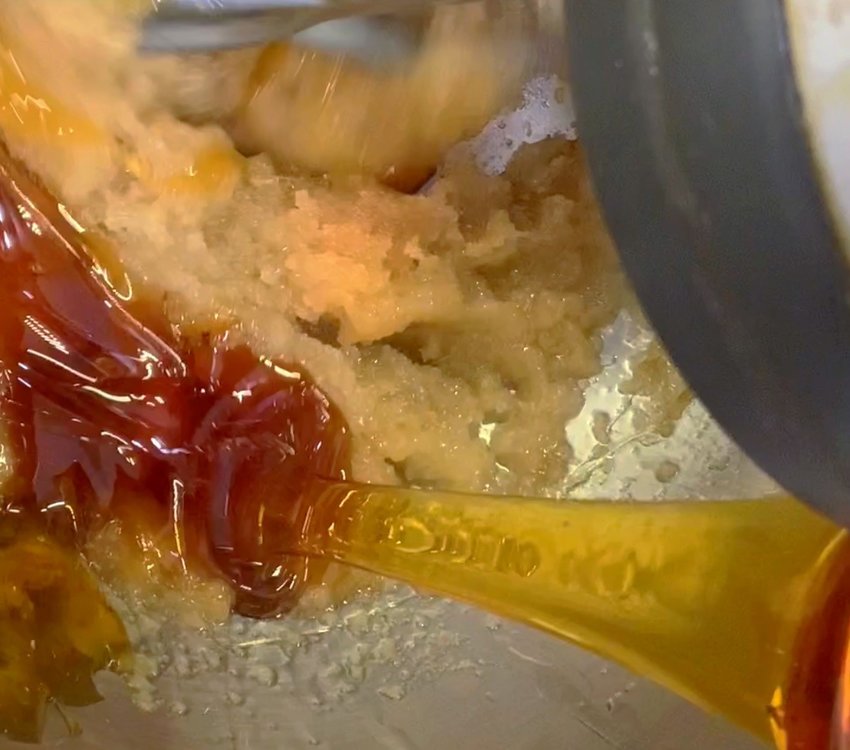 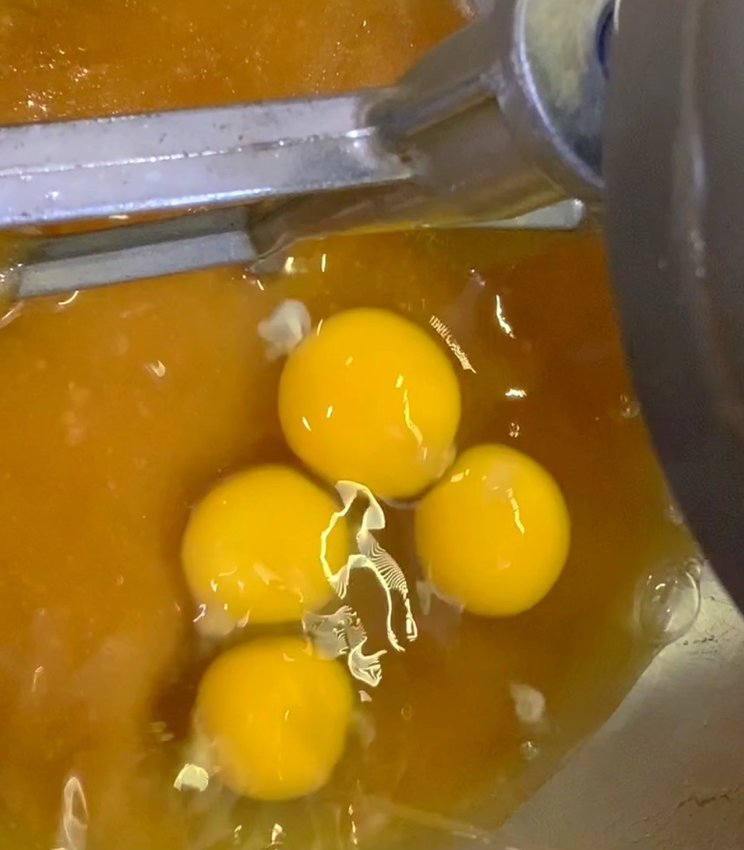 Using a paddle attachment in a stand mixer, cream together butter, oil, sugar, brown sugar, eggs, honey and vanilla. Mix in the dry ingredients and alternate with the milk. Mix well. 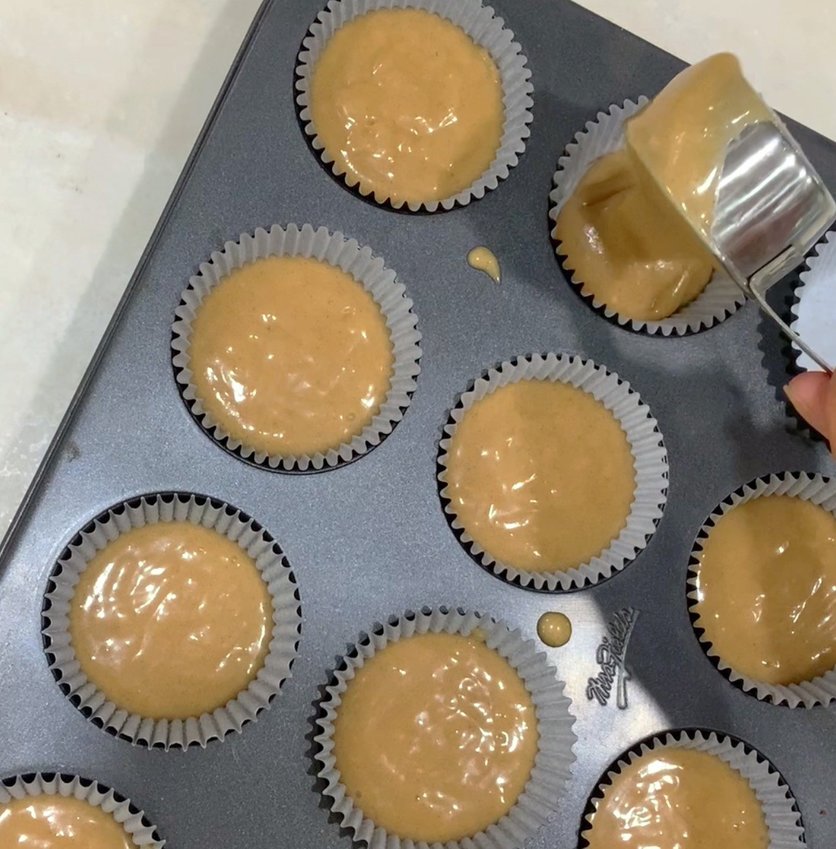 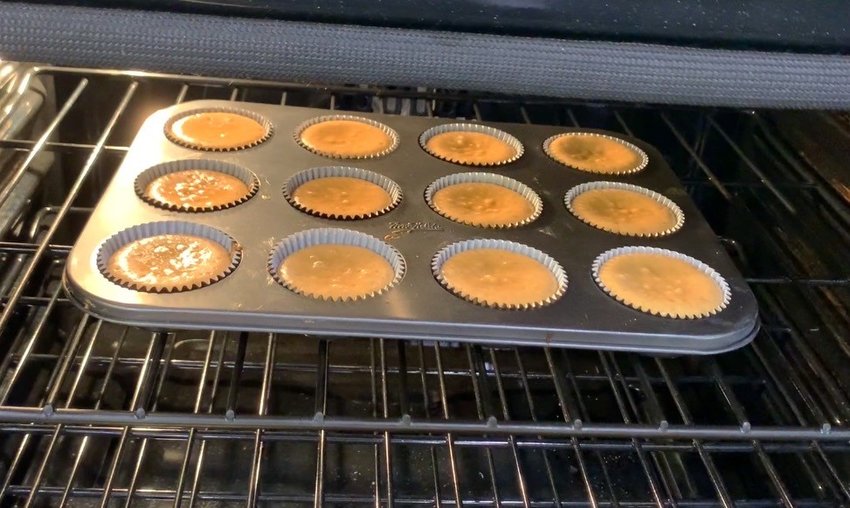 Mix in the dry ingredients and alternate with the milk. Mix well.

Fill cupcake tins and bake for 20 minutes, or until a toothpick inserted in the center comes out clean. 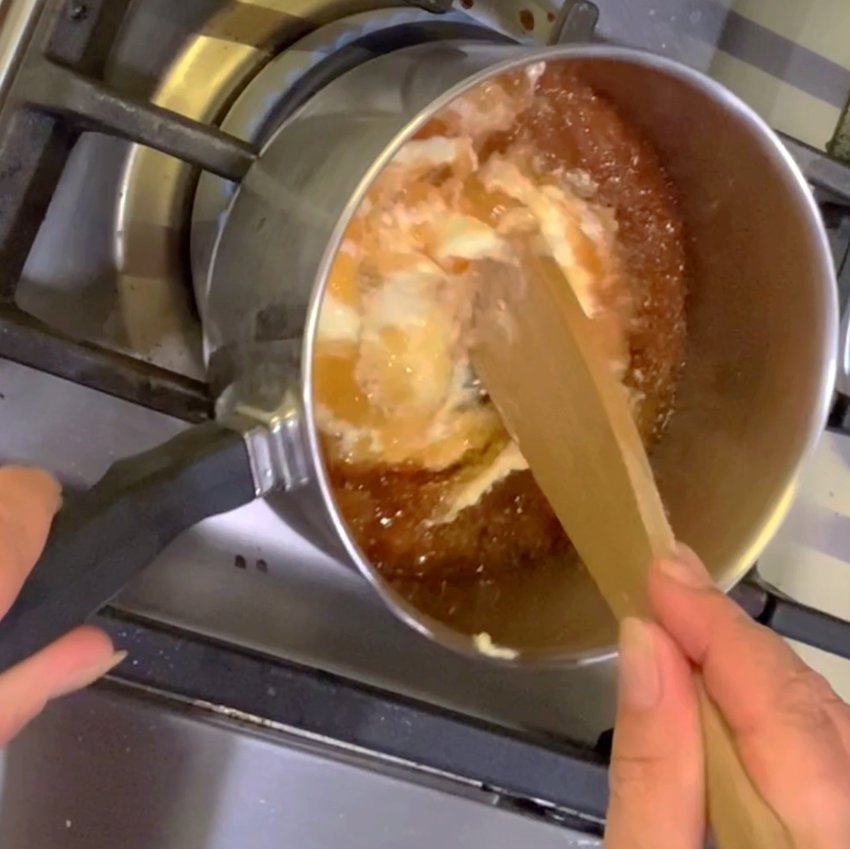 Make the honey caramel according to the recipe. 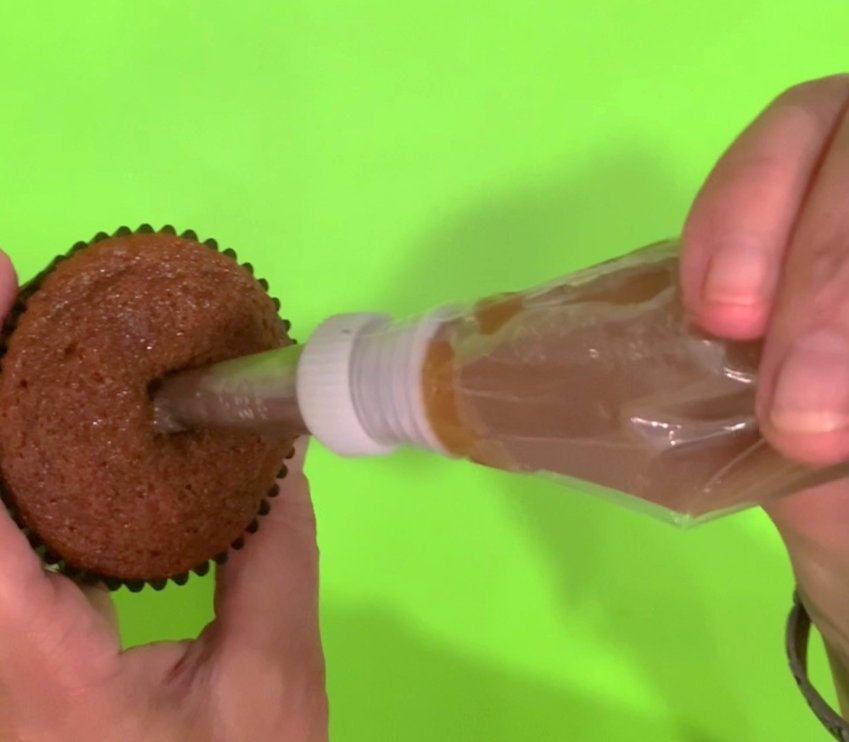 Insert the cupcake filling nozzle tip into a piping bag, and fill the bag with cold honey caramel. Insert tip into cupcake and fill with 1 to 2 tablespoons of caramel. 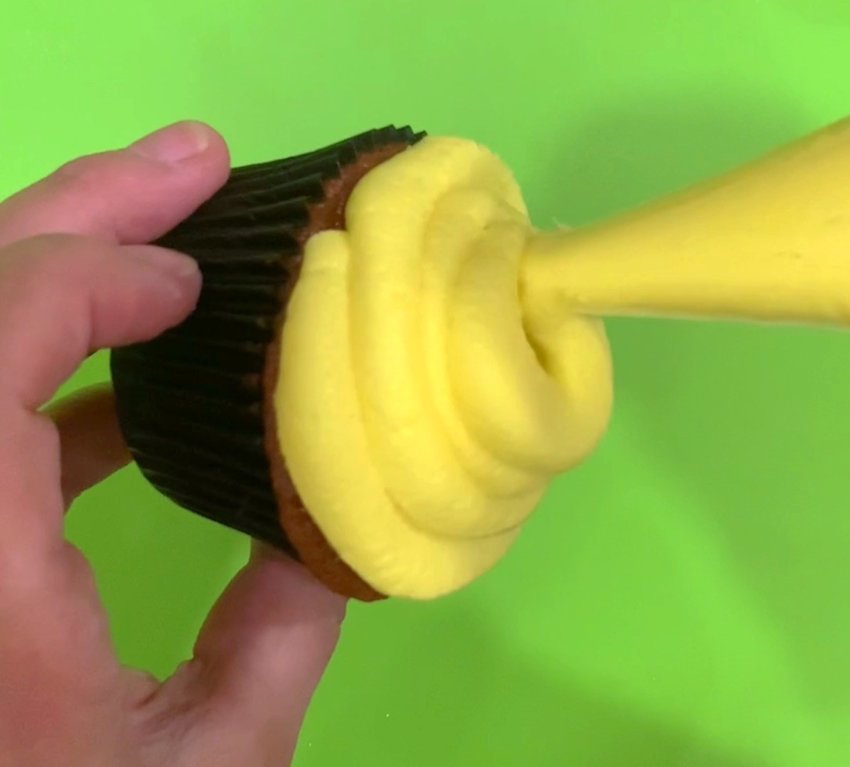 Pipe on a frosting of your choice. Top with a honey bee made of fondant.
Previous Next

In a small saucepan over medium heat, melt the butter and honey together. Stir continually until combined.

Increase the heat slightly, and allow to simmer gently for 8 minutes, or until slightly thickened and darker in color. Add cinnamon.

Whisk in the cream. Allow to just come to a boil, then remove from the heat.

Stir in the salt.

Let the honey caramel cool to room temperature before filling the cupcakes. The caramel can be stored in an airtight container in the fridge for up to five days.