An interview with director Tina Spangler

“Let’s say that I’ve never been to the Big Eddy [now in its eighth year], and that I have no idea what actually happens at a film festival. Can you help me break it all down?”

An interview with director Tina Spangler

I sat down with the Big Eddy Film Festival Director Tina Spangler last week and asked a few questions. “For the sake of argument, let’s say that I’ve never been to the Big Eddy, and that I have no idea what actually happens at a film festival. Can you help me break it all down?”

“Sure, let’s start at the beginning.” Spangler said. Her resume includes having attended film school where she learned the ins and outs of the business, eventually discovering that her main interests included new filmmakers who had yet to make a name for themselves, and how that process took shape.

“The Big Eddy Film Festival was created by the Delaware Valley Arts Alliance (DVAA), which has been presenting arts and culture to the community for close to 45 years, but didn’t really have a film program as part of its range. About eight years ago, the board of directors approached me, knowing that my background was in film and said that they wanted to start a conversation about hosting a film festival here in Narrowsburg, NY.

“I found that my forte was in film festivals and helping get the word out about new films just being created.” She explained. “I worked at the Sundance Channel for a long time, creating content… and we would go to the Sundance Film Festival yearly, talk to the new filmmakers and promote their films on the channel. So I became very comfortable around film festivals and new filmmakers and finding films just coming out of the editing room was exciting, films that had yet to find a following.

“It’s not easy to get people excited about films they’ve never heard of,” Spangler explained. “But we at the Big Eddy get very excited about being able to present them to the world.”

And that is what film festivals are for. 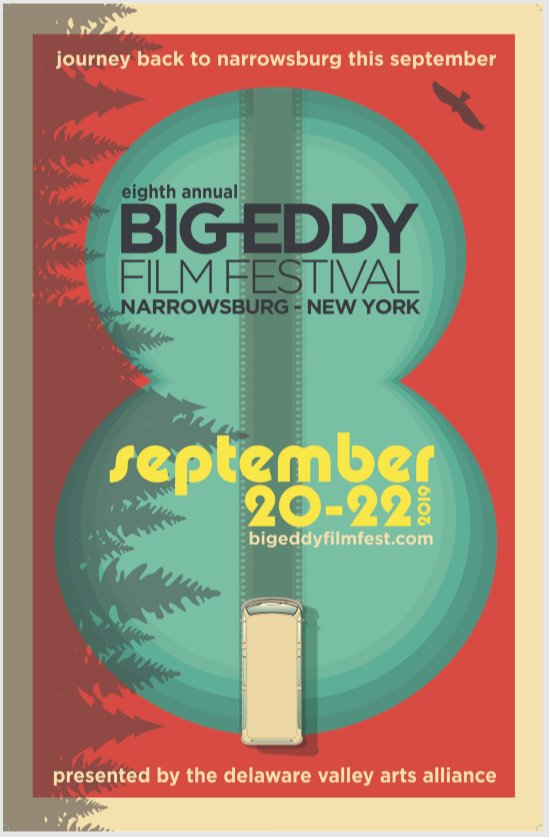 “Festivals have gained popularity over the decades, and even though I feel like we’re the ‘new kids on the block,’ this is already our eighth year. Even the Tribecca Film Festival, which has become very well known, has only been around for about 17 years.”

I pondered that for a moment before continuing. “Why then,” I wondered, “do you think that The Big Eddy has become so well known in the independent film community relatively quickly?”

“I think that filmmakers appreciate their experience here,” she answered. “We’re close to New York City and they can come up, breathe some fresh air and be around people who are actually very excited about their work. There are plenty of people who appreciate the world of arts and culture right here on both sides of the river,” she said. “I think filmmakers are pleasantly surprised to get up here and see that we’re doing a professional job, good quality projection. We’re showcasing high quality films and our audiences are receptive and smart.”

A big part of any successful film festival is that the question-and-answer sessions, often immediately following a screening, and Big Eddy Festival programming includes “talk-back” sessions, where the audience is invited to ask questions, listen to what others have to say about the film and actually converse with producers, directors, writers and, often, some of the actors as well.

“It’s not just about eating popcorn and seeing a great new film,” she said, expounding on my observation. “Everyone is invited to stay afterwards, and I think is a huge reason why people love attending film festivals like The Big Eddy.

“This is a chance to see the movies before anyone else has, which gives our audience members a little bragging rights,” she laughed. “And you have access to having a dialog with the people who actually made the movie. The world of film distribution is much larger in scope than it used to be.” Spangler said.

“When filmmakers finish their movies, they plug in to the festival circuit, which we are now a part of,” she said, further explaining how new films find their way to theaters across the world. “Now, even newer channels like Netflix and Amazon are attending big festivals, looking for new content, and that has changed the landscape of film festivals, too.”

Many festivals hand out awards to the dozens of documentaries, short films and features screened during the event, and Big Eddy presents one. “It’s called the “Audience Award” and is presented in a very democratic process,” Spangler explained. “Everybody who comes into each film gets a ballot, and anonymously votes on a scale of one-to-five. We, as the festival organizers, don’t decide on what might be considered the best of the best—the audience makes that decision.

“Of course, we’re showing some films that have already been screened at some of the bigger festivals,” Spangler said. “And we’re also showing films that have hardly been seen until now. This year, we are opening the festival with the New York State premier of the documentary film ‘Narrowsburg.’ (See Fritz Mayer’s article on page 1.) In fact, it’s only the second screening ever shown anywhere,” she enthused, “and centers on a scandal that took place right here about 20 years ago. It’s a big deal for us, and I think we are on our way to becoming known as one of the festivals at which to catch these new films very early in their life-cycle.”

Giving credit where credit is due, Spangler was intent on thanking everyone involved with organizing this monumental undertaking and pointed out that none of it could even happen without everyone at the DVAA along with legions of volunteers.

“In fact,” she said, “we’re always looking for more volunteers.” So, if anyone wants to go in for a couple of hours in the days to come and help out, Tina and Co. will be happy to see you all. Folks can even volunteer to assist with the concession stands, in the box office, handing out programs and “of course,” Spangler interjected, “they are welcome to stay and enjoy the film.”

I had the opportunity to screen a few of the short films in advance, including “Currency,” and “Helen,” both of which were shot locally and are part of the “Rural Stories” Big Eddy program. In addition, “Recorder: The Marilyn Stokes Project,” looks fascinating, as does “Guest Artist,” a new feature film starring Jeff Daniels. Director Timothy Busfield and producer Melissa Gilbert plan to be on-hand to discuss the film.

Not all screenings are at the Tusten Theater this year.

“For the first time ever, we are expanding to Delaware Hall in the Narrowsburg Union, which will accommodate more people and is being outfitted with a brand new state-of-the-art sound system that will blow audiences away. Opening night will be at the Union,” she said, “as well as the always-popular ‘Ice House Arts Kids Flicks.’”

The 2019 Big Eddy Film Festival takes place from Friday to Sunday, September 20 to 22. For a complete schedule of screenings and events, more information and to purchase tickets, go to www.bigeddyfilmfest.com, follow them on Facebook and Instagram, or call 845/252-7576.