The other morning, I was trying to explain to my husband, Stephen, about the canned tomato sauce recipe I was working on. I was leaving for a conference, and I needed him to process a gallon’s …

RR photo by Laurie Stuart
I tell people the garden is like having a boat, in that it takes a lot of time. On the other hand, my freezer serves as the frozen food aisle in a grocery store, conveniently located in my basement.
RR photo by Laurie Stuart
Four pints of pasta sauce. It's definiately a lot of work, but we'll enjoy the tastiness of it and the fact that it came from our garden and our hands.
Posted Wednesday, October 5, 2022 10:48 am

Finding control by losing it
By LAURIE STUART

The other morning, I was trying to explain to my husband, Stephen, about the canned tomato sauce recipe I was working on. I was leaving for a conference, and I needed him to process a gallon’s worth of roasted tomatoes that I had processed. Our freezer space is in short supply with the abundance of this year’s garden, and having some jarred spaghetti sauce in the pantry seemed like a solution to that challenge.

“Just send me an email with the recipe,” he said.

I felt I needed to let him know that I had used 15 pounds of tomatoes, since we didn’t have the 23 pounds that the recipe called for. “The recipe says that it can be halved or quartered, and basically all you need to do is add a tablespoon of lemon juice per pint jar to make it safe for home canning,” I instructed.

He was putting on his shoes, readying to leave for work. He didn’t seem to want to listen.

He, himself, had just returned from teaching a four-day building-science course in Vermont.

He brightened and said he had told some people there about the River Reporter’s Let’s Talk initiative, and they thought it was cool. Some of the details that he had told them were a little dated.

“We’re past that now,” I told him, slightly off-put that he was defining my work in language that wasn’t totally accurate.

It wasn’t a great conversation. I felt our words colliding.

I realized after he left that he was leaving a little bit later than usual, and had been in a hurry to begin his drive to work. I wondered too, why the slightly outdated details of the newspaper-initiative conversation mattered so much to me. Could I simply have been cheerful and thankful that he felt proud of my work and wanted to share it with his students and co-teaching collaborators from New England and beyond?

Later, when speaking with my production manager, I blurted out some assessment of a situation she was talking about, and immediately followed that with “I think I have to listen better.”

Generally, I am a pretty good listener, although sometimes it is hard to listen patiently. Often, I am eager to jump into a conversation. Sometimes I am very attached to wanting to make sure that someone understands the exact nuance of what I am trying to communicate. This attachment adds intensity to a conversation, and a certain level of expectation.

Today, I am curious about why it matters in casual conversation that someone else totally echoes, or even understands, those nuances.

And I’m thinking that if I just wanna feel better, I might do well to examine how I listen. 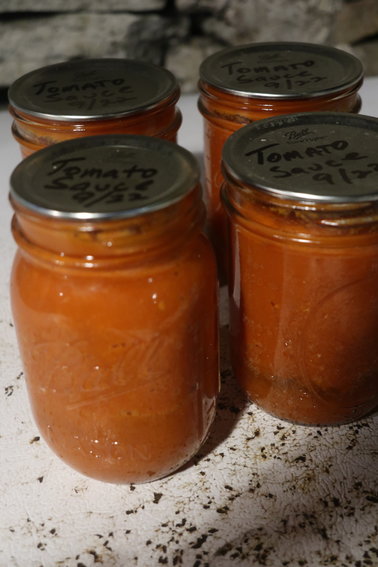 Four pints of pasta sauce. It's definiately a lot of work, but we'll enjoy the tastiness of it and the fact that it came from our garden and our …

In our chock-a-block schedules, slowing ourselves down by listening more intently seems like it might be the ticket to feeling better.

In one sense, if I truly listen to another, making eye contact, imagining what they are trying to communicate, and halting my own racing mind, it makes more space for us both to rest. I’m giving them the room to communicate their thoughts in their own way. And I am relieved of the responsibility to reinterpret it from my own perspective. I just need to listen.

It is really not necessary, or even desired, to jump in and say “I know what you mean,” and then launch into sharing a similar story.

Sometimes it is hard to listen with an open mind, and not jump to conclusions. To truly listen means turning off our judgments. It means not being a sentence-grabber. Not trying to speed someone up by finishing their sentences. So often when we do that, we don’t assume correctly, and rather than guess again, it seems more efficient to just let them finish in their own language.

Giving another the gift of listening, in everyday communication, not just in big conversations, is especially precious in our chaotic world right now.

It feels like it will create some breathing room.

What about you? What are you thinking?

In the blink of an eye

Finding control by losing it