From dismal to delightful

There’s nowhere else I'd rather be
By JUDE WATERSTON

In 1976, when I was liberating myself from my parent’s home and hunting for an apartment in Greenwich Village, I found the choices dismal. Some buildings, particularly those on MacDougal Street, a block from Washington Square Park, had only a bathroom out in the hallway, shared by all the tenants on that floor. Others had shower stalls or bathtubs in the kitchen and the only sink in the apartment was in that room, as well. A lone toilet sat in a closet.

One afternoon, defeated and dejected, I slipped into a bar on Sullivan Street for a drink. A friend walked in, someone I knew from my favorite drinking hole a few blocks away.

We chatted, and he mentioned he was the superintendent of the building directly across the street from where we sat. “I just finished painting a studio there. I think I can get it for you,” he said.

We went up to look at it together. The building, in fact, the whole complex, was composed solely of studios, minute spaces a little more than 100 square feet each. There was one little closet for clothes and a tiny bathroom with a tub with a shower nozzle, a sink and a toilet. The main room served as a bedroom, living room, kitchen and dining room. The rent was $180 a month. I grabbed it.

The “kitchen” was the biggest obstacle to overcome or, at least, to make functional. Lined up against one wall was a sink; under it was a cupboard containing the pipes, but with enough room for such things as cleaning products. There were three small wall cabinets above it; there was a refurbished stove, circa 1930; and a small Formica counter, under which was a refrigerator.

After I placed a dish rack on the counter, I was left with an area roughly 8 inches by 11 inches, for a crock filled with cooking utensils and my workspace for prepping food.

The fridge was ancient, and the door was made of solid metal. The only freezer space was an open compartment in which two ice cube trays snugly fit. So much for enjoying a pint of ice cream in my apartment.

My brother, a dentist professionally, was also an excellent and inventive woodworker. Eventually, he made me a large spice rack, which he affixed to a space on the wall. He also constructed a floor-to-ceiling cabinet, with shelves reaching almost to the ceiling; the bottom half was a large cupboard.

This piece of furniture was a lifesaver. It allowed me to house all kinds of containers of pasta and grains, vitamins, sugar and flour, and even a large food processor and blender. It was placed across from the stove, so I had about two feet of space between it and where I did my cooking.

I lived in that apartment, under those circumstances, for 40 years.

As you might imagine, when we first started renting our house in 1996, I walked into the kitchen and immediately felt ecstatic. It was a large, more-than-ample room with a full-sized (though smaller than usual) refrigerator, a double sink, floor and wall cabinets, and a nice-sized stove. Unfortunately, the stove was electric, which I abhor, but eventually the owners replaced it with a gas stove when the first one went kaput.

There was an ancient and decrepit dishwasher as well, but since neither Janet nor I had ever had a dishwasher and were used to washing our plates, bowls and glasses by hand, I took to using it as another storage cabinet, filled with boxes of crackers and bottles of unopened condiments.

The house had been built on a tight budget, and all of the cabinets in the kitchen were not only an unattractive shade of muddy brown, but were built of faux wood. They were crappy, and over time began to deteriorate and break away from the walls. The floor was an equally ugly style of linoleum, and we hoped that the longer we had the house the more we could do to change the original fixings.

Still, I was thrilled to have so much space to work in, and we even bought a sturdy wooden, marble-topped island to put in the middle of the room, giving me even more work space.

In 2004, the owners of the abode decided to move to the south, and offered to sell us the house without even putting it on the market. We have owned it since then, and moved into it full-time a little over five years ago.

Over time, little by little, we renovated the kitchen. We had the dishwasher removed, and replaced it and all of the cabinets in the room with beautiful, pristine white cabinets with polished brushed chrome knobs.

We replaced the refrigerator twice, and when the current one was delivered, I wondered if it was possible to fall in love with an appliance. That’s how I felt as I filled the two large crisper drawers with fruits and vegetables, and put dozens of bottles of condiments in the two doors; filled the large freezer with packages of meat, dumplings, chicken and other foods; and christened a shallow drawer the width of the fridge the “cheese drawer.” “Don’t put anything but cheese in there,” I solemnly instructed Janet. “I understand,” she assured me.

We replaced the oven with a larger, heavy-duty one and now the broiler is in the oven. Instead, there is a drawer on the bottom, where I keep baking and roasting pans. For a few extra bucks, we purchased a stove-top grill that can replace the middle grate, and I use it often to cook chops and steaks.

We put in new countertops and replaced the old linoleum on the floor with one that looks perfect with the grey-and-white color scheme of the kitchen. And we had shelving installed and a cabinet built with both open shelves and a large cupboard underneath. It’s perfect for displaying our colorful vintage tableware.

Another handmade cabinet houses dozens of bowls, serving dishes and some of my cookbooks behind glass doors. The top is perfect for a cooking scale and more bowls filled with ripening avocados, tomatoes and mangoes, plus a beautiful two-tiered serving dish decorated with hand-painted birds, given to us as a housewarming gift.

The kitchen is my domain. I allow Janet to walk through it and to wash the dishes after our meals, but it is the room in our house in which I feel most at home. I spend hours there daily and revel in the fact that after all these years I ended up with the kind of kitchen I’d one day hoped to have. It’s mine, all mine! 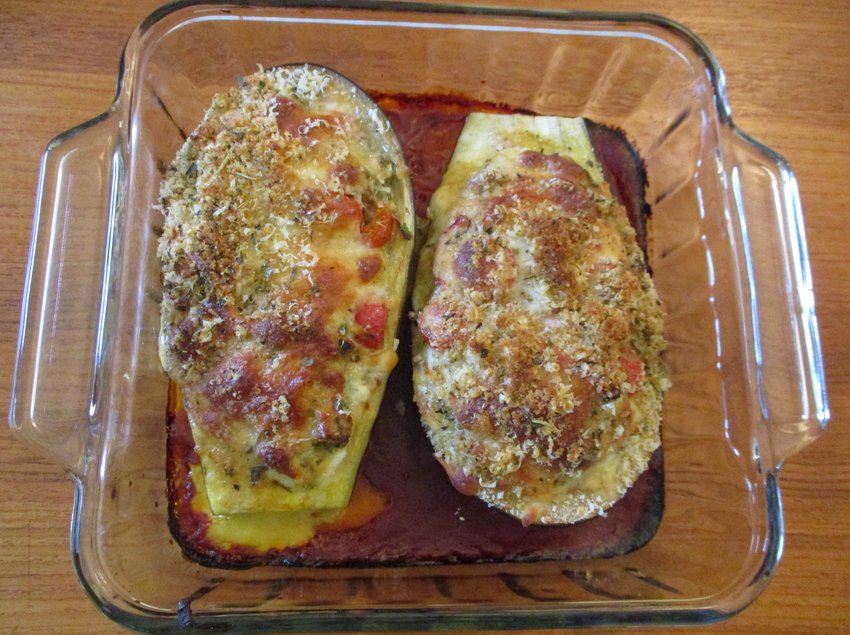 This is a favorite new recipe I concocted. Eggplants are available year-round, but they are sold at the farmers’ market in Callicoon, and I would guess at other farmers’ markets, as well. Choose ones with smooth, shiny skins and no blemishes.

Preheat oven to 375 degrees. Spread the marinara sauce on the bottom of a baking dish large enough to fit the two eggplant halves, laid side-by-side.

Hollow out each eggplant half, leaving a 1/2-inch border on the outside, until you have two eggplant “boats.”

Chop the removed eggplant into a medium dice.

In a medium-sized skillet, add the olive oil and then the onions. Cook until soft, about 5 minutes. Add the chopped eggplant and season with oregano, salt and pepper. Cook, stirring often, until golden and tender, 4 minutes. Add the minced garlic and cook for another minute.

Transfer the mixture to a medium-sized bowl. Add the chopped tomatoes, 1 cup of mozzarella and 1/4 cup grated cheese.

Lay the scooped-out eggplant halves in the baking dish, and scoop the mixture evenly into the eggplants. Top with the remaining cheeses and the breadcrumbs. Bake for 50 minutes until the cheese is golden and the eggplants have softened.

Broil for about 3 minutes to crisp the tops.

Garnish with basil, if using, and serve immediately.