Photos contributed by Chris Raabe
Chris Raabe is our third featured artist in The River Recordings series, you can watch all our artists' performances at riverreporter.com/river-recordings.
Posted Wednesday, October 16, 2019 11:48 am

REGION — Chris Raabe and I have plenty in common. We’re both songwriters, singers, guitar players, blues obsessives and bandleaders trying our best to make a living off music. Unless you plan on opening a store or becoming a teacher, there is really only one way to make a musical living: a full calendar of gigs.

So, after neglecting until the very last minute to send him the details about what to expect upon arriving at The River Reporter’s makeshift studio to record some of his original songs, I used the excuse that I had gotten distracted by a particularly gig-filled weekend.

“Dude no problem, I completely get it, life is crazy when you’re after it!” he texted back.

Raabe is the October featured artist in The River Recordings series, a project from The River Reporter that highlights local talent by recording artists in our newspaper office, followed by a full artist showcase later that month at a local music venue.

Originally from the Hudson Valley, 32-year-old Raabe has been pursuing music for the past nine years. As frontman of The Chris Raabe Band, he is most fundamentally a blues singer and guitarist whose love for a range of other genres adds a unique flavor to his style.

After close to a decade of day jobs and various side hustles, Raabe is at a turning point in his career. He was working his last job in a guitar shop when he realized that it took too much time away from what he was really after, so he decided to ditch the saftey nets and go all in on his music.

“It answered the big question, whether I could do that job on the side, or do anything on the side,” he said. “The truth is, you can’t.”

Quitting the day job is perhaps one of the most daunting rites of passage down the long and winding path toward the elusive “successful career” in music. Combating self-doubt about his decision has been one of Raabe’s “biggest battles.”

“Everyday you look in the mirror and go, ‘Should I just get a real job? Should I stop this grind?’” he said.

Raabe finally feels confident saying “no” to those pessimistic reflections of self-doubt. He’s played more often, in front of bigger crowds and has made out better financially than ever before over the past year. More importantly, he said, he’s started overcoming an “identity crisis” he’s faced since the beginning.

Raabe got a late start. Growing up in Cornwall, NY, he was enamored with the sounds of the electric guitar as a kid—he notes that the “epic” opening riff of “Layla” by Derek and the Dominoes echoed in his head all throughout his teenage years. But he didn’t get his first guitar until he was 16 or 17. Even then, it would take another couple years before he took it seriously.

He was all about hard rock in the early days—to this day, he has a soft spot for bands like Linkin Park and Avenged Sevenfold. Raabe didn’t care much about classic rock bands, with one notable exception: AC/DC.

“I was always obsessed with Angus Young… his guitar playing killed me,” he said. “I wanted a Gibson SG straight out of high school.”

“Everything I do kind of stems from blues,” he said. “It has to have a little of that in it or I don’t appreciate it.”

Raabe’s appreciation for the artform was apparent during his TRR office performance. Listeners will hear inspiration from the likes of John Mayer and Joe Bonamassa, some of modern blues primary purveyors.

Having fully made the transition from listener to player, Raabe traveled the country throughout his early 20s, making stops in the industry’s various capitals including Los Angeles, Nashville, Memphis and Chicago. He’s since realized those scenes don’t suit him.

“Nashville’s a great town, but every single guitar player is there,” he said. “What’s left for you? It’s like you’re going for a piece of the pie that’s been eaten 20 times over.”

If you’re looking to become a rhythm guitarist in somebody else’s cover band, Raabe said, you can find work in a place like Nashville. He doesn’t knock anybody with that goal, but Raabe is after something more artistically fulfilling than being a “guitar-for-hire.”

“I never wanted to be that guy… I wanted to make a path for myself, as hard as it is.”

A key component in forging his own path, ironically, has been finding the right group of musicians to surround himself with. Therein lies another rite of passage for any aspiring musician: discerning between those who take the work just as seriously as you do and the vast majority of musicians who treat it as a secondary occupation at best.

“There’s nothing wrong with saying ‘I want real stability and music’s just a side thing,’ because music is beautiful; if you have it in your life at all, it’s a beautiful thing,” he said. “But… when you’re struggling to make rent, when you’re struggling to book a gig, when winter hits and a slew of gigs cancel because it snowed all week… you need guys who understand, who are in that corner with you.”

Raabe has found the brotherhood he needed in drummer Kenrick McBean and bassist Eric Winter, who now make up The Chris Raabe Band. The trio has just been “clicking” this past year, Raabe said, and they’re constantly gigging all over the northeast.

“We have the same vision, we’re all pushing forward and trying to make stuff happen,” Raabe said. “That’s a big thing, cause at the end of the day I can’t do this alone. I’ve been doing it by myself for so long.” 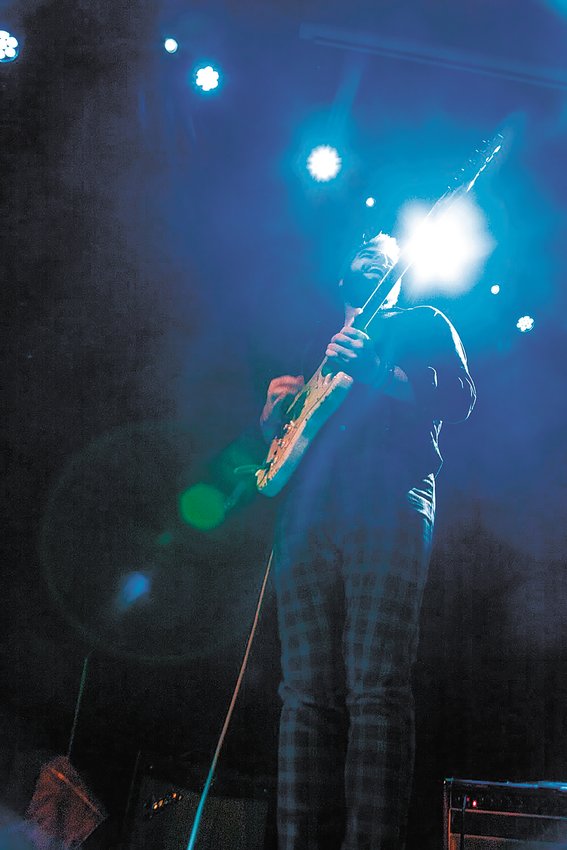 Chris Raabe will be performing a full artist showcase at Here & Now Brewing Co. in Honesdale, P.A. on Friday, October 25 at 7 p.m.

Raabe’s band is solid, his schedule is full and his artistic vision, at least for now, is clear and free of identity crises. Now it’s time to release some original music. As he described to me the process of producing his first album, another difference between the two of us became clear: he possesses a patience and dedication to the craft rarely seen in any industry.

He’s technically been working on his first album for seven years. It began with a kickstarter that successfully raised enough money for Raabe to record his original music at a studio in New Jersey. The studio, however, turned out to be a bust. He said the place took him for a ride, failing to uphold promises it had made and in short, resulting in a disappointing final product.

Instead of releasing a mediocre album, Raabe started from scratch and recorded it all again, but once again, he just wasn’t happy with the sound. He’s just finishing up recording it all a third and final time.

Now the problem is, the album’s tracks, written in his 20s, feel “distant” to Raabe, plus his current band has a wholly different sound. He has an unorthodox solution for this problem. He plans to release three different albums this coming year: his first album, a more up-to-date album with his current band and a stripped-down, acoustic album. He’ll be dropping them all at the same time, “which is ridiculous and not the right way of doing things,” he said with a laugh. “But I don’t care, I’ve never been one to do things the way someone tells you to do it.”

Learning how to “not care” has done wonders for Raabe’s career and artistic fulfillment.

Overcoming fears and anxieties about the minute details has left Raabe with more mental space to facilitate true self-expression through his music, or to “just get silly with it.”

For a guy with too many gigs to keep track of, three different albums simultaneously in the works, no safety nets to fall into and a recently busted transmission which will cost him some extra gigs to get fixed, Raabe is impressively zen.

“I’m ready. As simple and weird as that sounds; I’m ready,” he said at the end of our conversation. “I don’t know many people who can say they do what they love everyday… and this is what I’m going to do, even if it hurts.”

Click here to watch Chris Raabe in the third installment of River Recordings.

The Big Eddy Film Festival is back in town