Begging for burgers at Begg’s

My earliest recollection of accompanying my mother while she shopped is of going to a woman’s clothing store on the south shore of Long Island. It was called Begg’s. I must’ve been …

Begging for burgers at Begg’s

My earliest recollection of accompanying my mother while she shopped is of going to a woman’s clothing store on the south shore of Long Island. It was called Begg’s. I must’ve been four or five at the time.

Once inside the narrow shop, my mother would release my hand from her warm grasp, and I was free to wander among the silks and satins until she was ready to enter the fitting room.

A short discussion preceded my meanderings. My mother would stoop in front of me, so that we were at eye level with each other. “Now, if you’re a good girl while we’re here, we can have a special lunch together when I’m done,” she promised.

My mother made a face, as she wasn’t one for fast food, but nodded in agreement. “Okay, off you go,” she said, giving me a gentle swat on my behind.

I liked the evening clothes the best. The glitter of sequins thrilled me, and I enjoyed lazily running my hands over the stiff taffeta, shiny satin, and—best of all—the smooth velvet. When my mother had collected the maximum number of garments allowed in the dressing room, she would have to pry me away from the velvet. If any coat or jacket happened to be trimmed in fur, my mother was confronted with my whiny plea that she take another minute or two to browse.

The communal dressing room was fascinating. It was paneled in dark wood, over which were hung full-length mirrors that made all of the ladies look dramatically thinner than they were. The flowery scent of perfumes and powders clung heavily.

I immediately squatted on the floor a couple of feet from my mother, with my back against the wall, and gazed at the half-naked women around me. They looked oddly huge and imposing from my perspective. I noted the different styles and colors of girdles and brassieres, and listened intently to the women’s comments and questions. “Do you like this color on me or does it make me look too sallow?” “Am I too buxom for this cut?” “That style is a knock-out on you!” “I can take a size smaller don’t you think?”

Their voices wafted over my head in a constant stream. My mother, on occasion, would bend down to smile at me or ask my opinion of something she was trying on. “Buy it!” I quipped without hesitation.

Eventually, I’d tire of the moving arms and legs slipping into and out of mountains of clothing, some of which would inadvertently drop on my head, and I would begin to whine, “I’m tired, Mommy. I’m ready for my burger.”

It seemed to me that she had already tried on hundreds of shirts, skirts and dresses, and that I hadn’t seen food in days. “I’m hungry,” I said. No response. “I’m very, very starving, Mommy!” I announced loudly. Embarrassed at my outburst, my mother immediately knelt in front of me and said quietly through clenched teeth, “If you do that again, we will go straight home, and you will not have a hamburger. Do you understand?” she asked.

A response was expected—that was for sure. “Yes,” I said hanging my head.

My mother stood up, and quickly glanced through the clothes on the hooks in front of her. I was astonished when we emerged from the dressing room, and I saw that she had taken only two items, carefully draped over her arm. She had a special laminated Begg’s credit card, which she allowed me to ceremoniously hand over to the saleswoman at the register.

In the car, as we headed to my favorite McDonald’s—the one with the little man-made pond in back, where two regal white swans and a handful of shiny-coated ducks peacefully swam—my mother ruminated over her purchases. “Maybe I should’ve gotten that rose silk blouse,” she said. “No, no, it was way too expensive,” she countered herself. “Your father loves me in that color,” she mused.

A moment later she shook her head, driving the rose silk out of her mind. We stepped from the car and entered McDonald’s, hand in hand.

I took my burger out back, and sat on a large slate rock not far from the water. My mother took a packet of fries with her to a bench a few feet from me. It wasn’t long before she was back to mulling over her selections. I took a bite of my burger and watched excitedly as one of the swans glided effortlessly to the edge of the water and emerged, shaking its feathers as it stepped on shore.

“Juju,” my mother called over to me. I turned from the water to face her. “Do you really like the cream-colored skirt?” she inquired. Before I could respond, I felt my burger being snapped from my grasp. I turned to see the swan standing in front of me with the burger protruding from its hard black beak. It snapped its head toward my hand, hoping for more food, and I began to wail in fear. My mother was instantly by my side and scooped me into her arms. I clung to her neck as she headed back into McDonald’s.

She was about to complain of the theft, when she realized I was more frightened than anything else. She turned, and carried me to the car. She kissed me on the head as she lowered me into the seat and snapped on my seat belt.

As she headed home she turned repeatedly to check on me in the back seat. I was still shaken up when we arrived at our house. I bolted through the front door and met my father coming out of the den. “A crazy goose stoled my hamburger!” I announced as my mother entered the house behind me. My father looked appropriately dismayed, though he still had the wherewithal to correct my grammar. “Stole my burger,” he said, then added, “Tell me all about it,” leading us back to the den. My mother headed into the kitchen.

When I’d told my story to my satisfaction, three or four times, I let my father leave the room to join my mother. I settled down to watch cartoons. I heard the rustling of a bag being opened and a few moments later my father said, “Mattie, that looks terrific on you. Why didn’t you buy more than one? Go back tomorrow and get it in another color, will you?”

“I’m too exhausted from that ordeal,” my mother answered wearily. After a pause, she added, in a whisper, “I don’t believe we’ll be going to that McDonald’s ever again.”

She was right. That swan who, incidentally, was a rather drab shade of dirty gray up close,  had put an abrupt end to my infatuation with fast food. 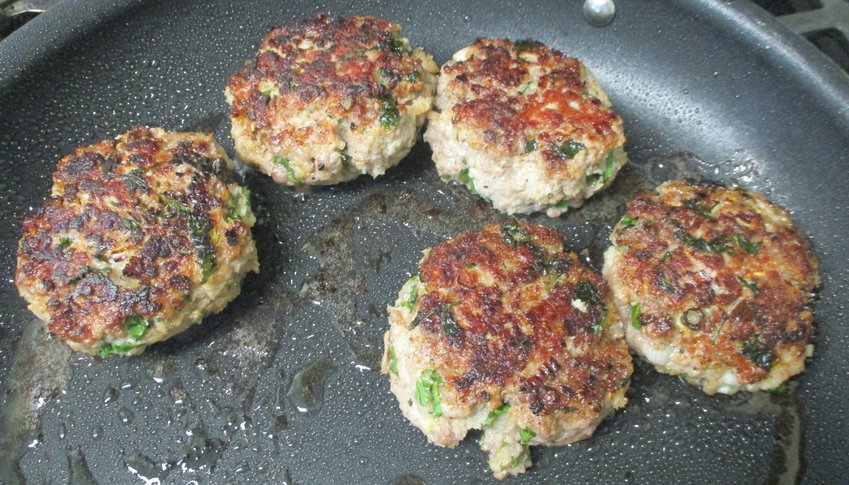 In a large bowl, place all of the ingredients for the burgers, except the oil. With a fork or your clean hands, gently combine ingredients thoroughly. Do not overwork. Place them on a plate, cover with plastic wrap, and chill while you make the cucumbers and mayonnaise.

In a medium-sized bowl, combine vinegar, sugar, salt and ginger. Add the cucumber slices and stir gently. Cover and refrigerate until ready to use.

Heat the oil over medium-high heat in a large nonstick skillet. When hot, carefully add the burgers to the oil. Cook until browned nicely, 4 minutes, then turn and cook an additional 4 minutes.

Place on toasted buns that have been slathered generously with the mayonnaise. Serve with pickled cucumbers.

Common US foods that are banned in other countries