At the starting gate of harness racing history

At the starting gate of harness racing history

Photos contributed by the Sullivan County Historical Society
“Liberty Driving Park.” A vintage postcard documenting harness racing action during the early 1900s. The original photograph was taken by Otto Hillig (1874-1954), a noted local photographer famous for recording scenes from around the area.
Posted Wednesday, January 27, 2021 9:33 am
By TED WADDELL

While memories are somewhat clouded by the mists of time, there were driving parks in the villages of Monticello and nearby Liberty, and vintage postcards from the Sullivan County Fair of 2015 remain as visual witnesses of spirited harness racing.

During the late 1800s and early 1900s, four-footed steeds, standing alone or hitched to wagons and buggies, served as the primary mode of transportation. As human nature would have it, folks started racing each other to determine who had the fastest horse, either saddled or powering a wheeled rig of some sort.

As people began racing on common roadways, trouble soon reared its head. Accidents involving charging horses began to mount up, and as a result, communities across the land created driving or trotting parks. Competition moved off roadways onto established perimeter tracks, where large crowds gathered to see who would be the first to cross the finish line. 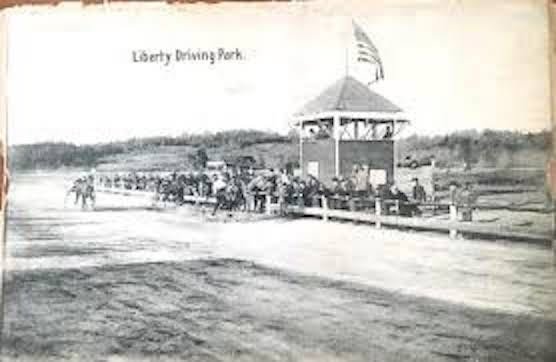 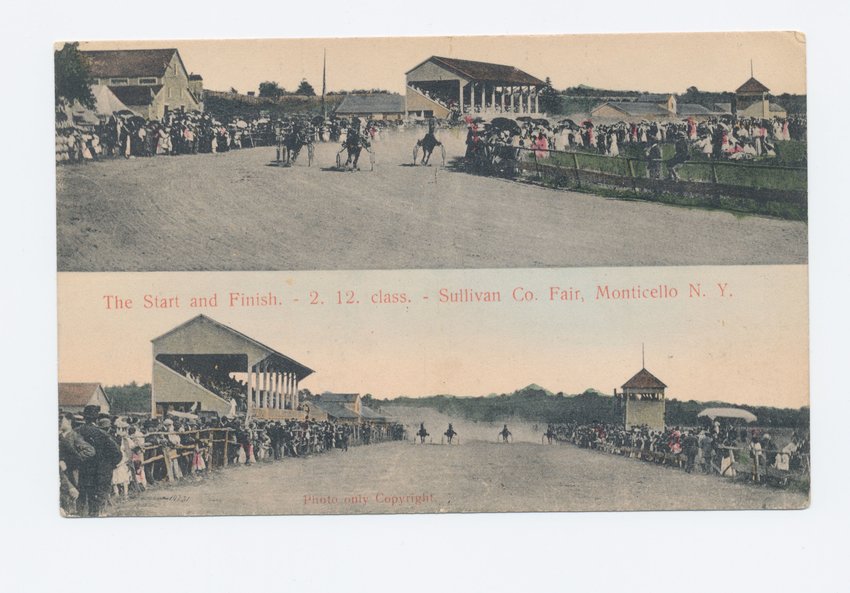 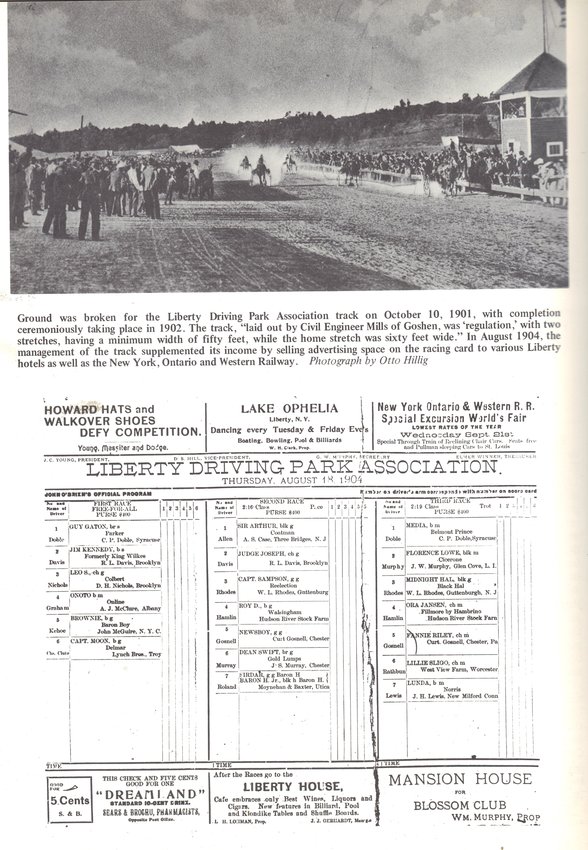 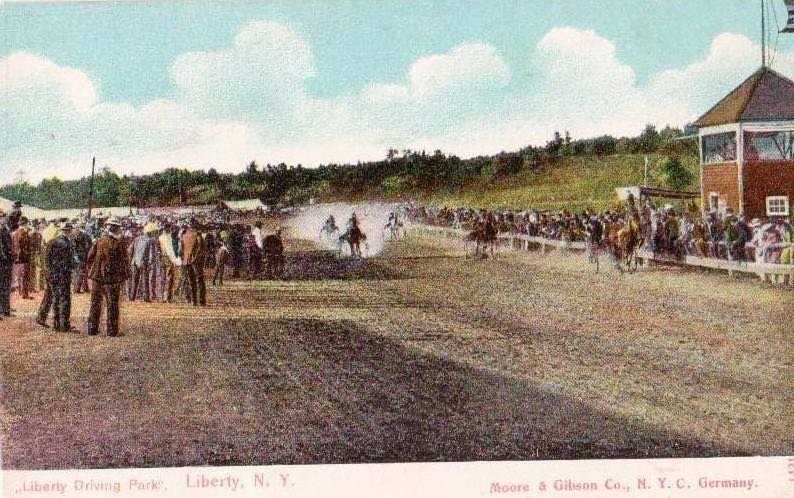 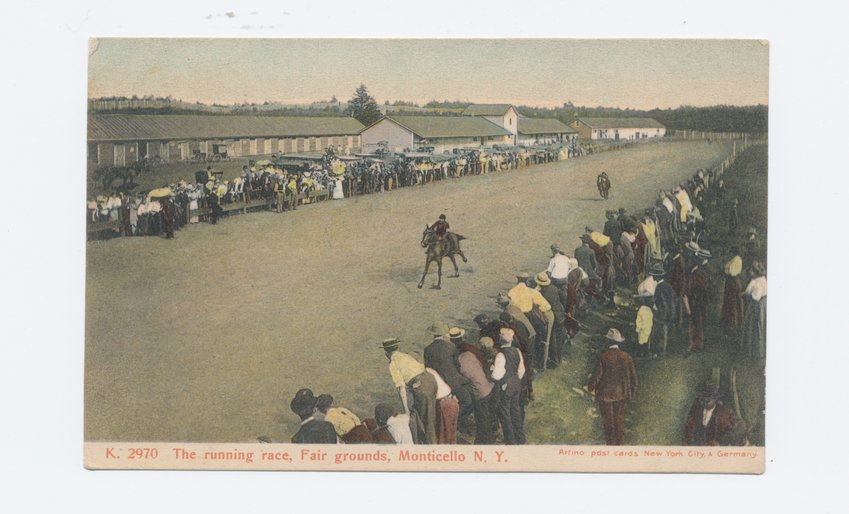 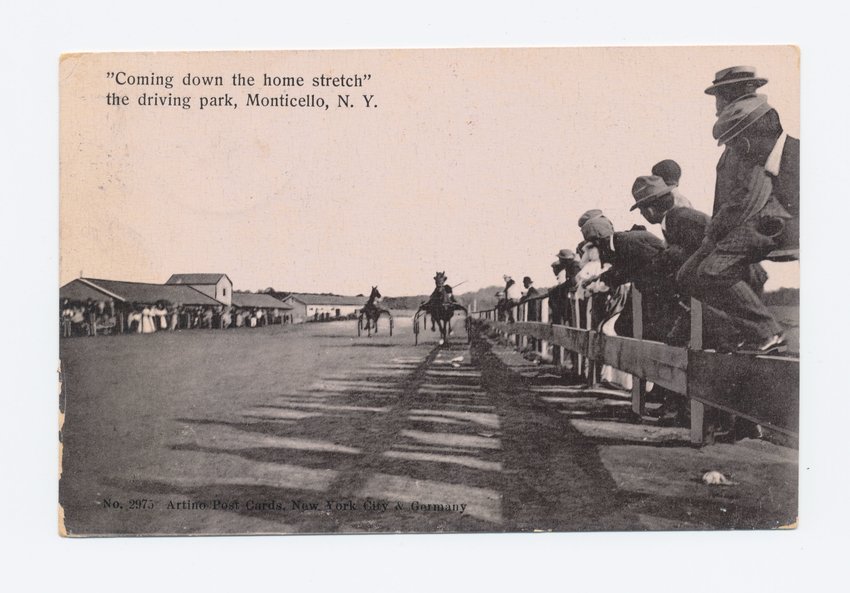 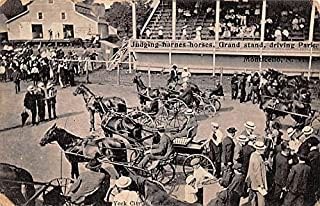 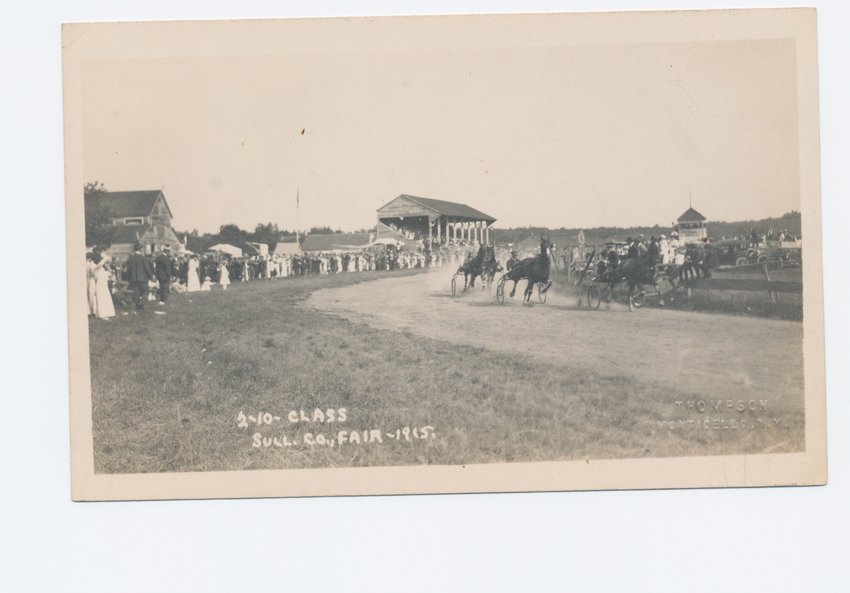 A formal, mile-long driving park was created in 1874 in Rochester, NY through the labors of George W. Whitney, a noted miller; Mortimer Reynolds “of arcade fame,” James Vick, a nurseryman; and Patrick Barry, along with other backers of organized sulky racing.

The driving park opened on August 12 (another source lists the date as August 11) of that bygone year and was instantly welcomed into the Grand Circuit of the National Trotting Association. At the time, the track was billed as the fastest mile track in the U.S.

According to an article titled “The Glory Days at the Driving Park” by Donovan A. Shilling, published in The Crooked Lake Review, “On opening day, thousands of racing fans made their way through the ornate Victorian entrance gate, which was flanked by two ornamental towers. Three large wooden grandstands accommodated much of the crowd... A handsome three-story judge’s stand stood opposite the center grandstand... Catching the eye was the red, white and blue bunting that decorated the grandstand and draped the infield fence,” Shilling wrote, painting a vivid picture of races held for both pacers and trotters.

The facility witnessed numerous spectacles, such as a re-enactment of a Civil War battle “complete with uniformed volunteers, military drills and cannons booming.” An advertisement for the famous Western-themed show, published in the July 31, 1895 edition of the Democrat & Chronicle, touted the event as “Buffalo Bill’s Wild West Show, and Congress of Rough Riders of the World... the Show of Shows” featuring “Red Royalty – the World’s Rovers, an Original Progamme of Original Facts by Original People.”

A year before the century turned, a fire destroyed two of the park’s three wooden grandstands. On Memorial Day 1900, the driving park hosted automobile races. In 1902, the Grand Wallace three-ring circus showed up with a “small army of active, jolly clowns” and “the largest hippo in captivity.”

“Both Monticello and Liberty had harness tracks around the turn of the century,” said Sullivan County historian John Conway, noting that the one in Monticello, NY was located at the old fairgrounds on West Broadway, while the other was situated in Liberty, NY, near where the Trading Post stands today.

“It wasn’t that harness racing was new to the area,” Conway explained. He penned a retrospective article about Monticello Raceway titled “The World’s Fastest Half-Mile Track” dated June 25, 2004, in which he noted, “Tracks in Monticello and Liberty flourished from the 1890s through the early years of the 20th century.”

“My grandfather was quite the horse owner and raced there on occasion,” Conway said of his forebearer’s association with the Monticello Driving Park.

“He was one of the directors of that track for a time, but long before I was born. My grandfather, also John Conway, grew up in a large family in Kiamesha Lake, where his parents, Irish immigrants, owned a farm and boarding house.

“He always owned horses and was engaged in the livery business in Monticello, first with horse and carriage and then, later, with automobiles.”

Over the years, the county’s well-versed historian has referenced the Liberty Driving Park in his numerous writings and has featured its lore on at least one of his historical bus tours, “The Magical History Tour,” which Conway has put together and narrated throughout the last 25 years.

In addition to the pair of neighboring harness driving parks, there was also an early track at the fairgrounds in Monticello, the site of the old annual Sullivan County Fair.

Memories of these driving parks are clouded by the passage of time, but a few postcards from the era remain to record their rich history in images taken by Otto Hillig (1874-1954), a noted documentary photographer.

Bill Heller, of the Liberty High School Class of 1971, has been writing about horse racing for 45 years and currently covers the sport of kings for Harness Racing Update, an online harness racing magazine.

Spearheaded by the efforts of the association’s president—J.C. Young, a local merchant, banker and dairy farmer whose name lives on with Liberty Fire Department’s J.C. Young Hose Company #1—the group acquired 40 acres of land. On October 10, they started construction of the track and completed the project in the summer of 1902.

As part of the Hudson and Mohawk Valley Circuit, initially, 10 horses were stabled at the driving park, and by April of 1903, the stable had risen to 50 horses, and the capacity of the grandstands increased to accommodate up to 1,000 fans of the sport of harness racing.

The track closed after several years of struggling with financial woes and was foreclosed upon in 1911. Along with the driving park in Monticello, it receded into the haze of time, only to be occasionally unearthed by sports scribblers in search of stories.