Veterans have been honored by the United States and their allies each November 11 for 103 years. Since much of our nation’s history has depended on selfless service to country, we take this …

Thinking about veterans
By JEFFREY SIDLE

Veterans have been honored by the United States and their allies each November 11 for 103 years. Since much of our nation’s history has depended on selfless service to country, we take this last weekend in November to recount the history and reflect with gratitude on the gifts of our veterans and our responsibility to them.

The Allied powers signed a ceasefire agreement with Germany at Compiégne, France, at 11 a.m. on November 11, 1918, bringing the war now known as World War I to a close. President Woodrow Wilson proclaimed the first Armistice Day the following year on November 11, 1919, with these words: “To us in America, the reflections of Armistice Day will be filled with solemn pride in the heroism of those who died in the country’s service and with gratitude for the victory, both because of the thing from which it has freed us and because of the opportunity it has given America to show her sympathy with peace and justice in the councils of the nations.”

Originally, the celebration included parades and public meetings, following a two-minute suspension of business at 11 a.m.

Between the world wars, November 11 was commemorated as Armistice Day in the United States, Great Britain and France. After World War II, the holiday was recognized as a day of tribute to veterans of both wars.

Rep. Ed Rees of Kansas later introduced a bill establishing November 11 as Veterans Day, honoring U.S. veterans of all wars, including those killed in action. Congress passed it in 1954, and President Dwight D. Eisenhower signed the bill into law on May 26 of that year. 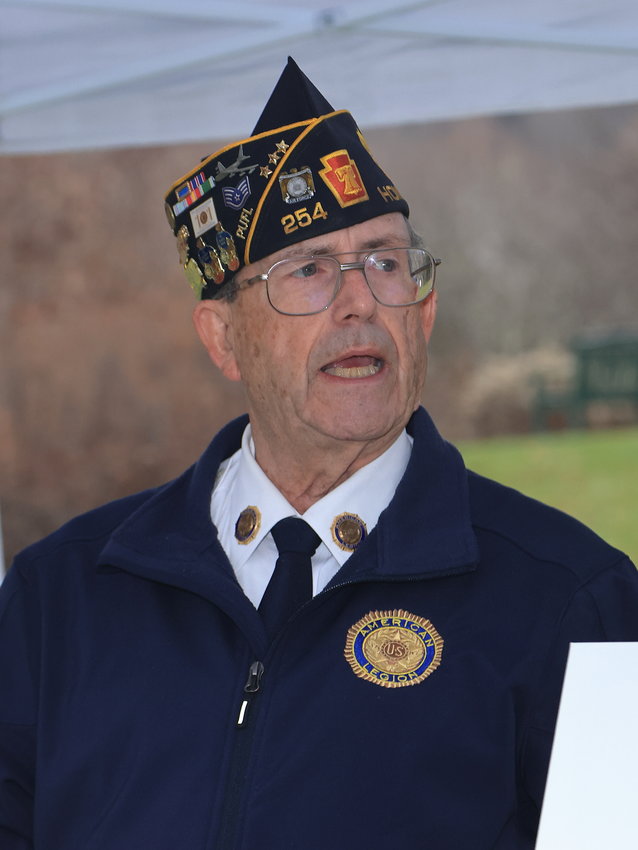 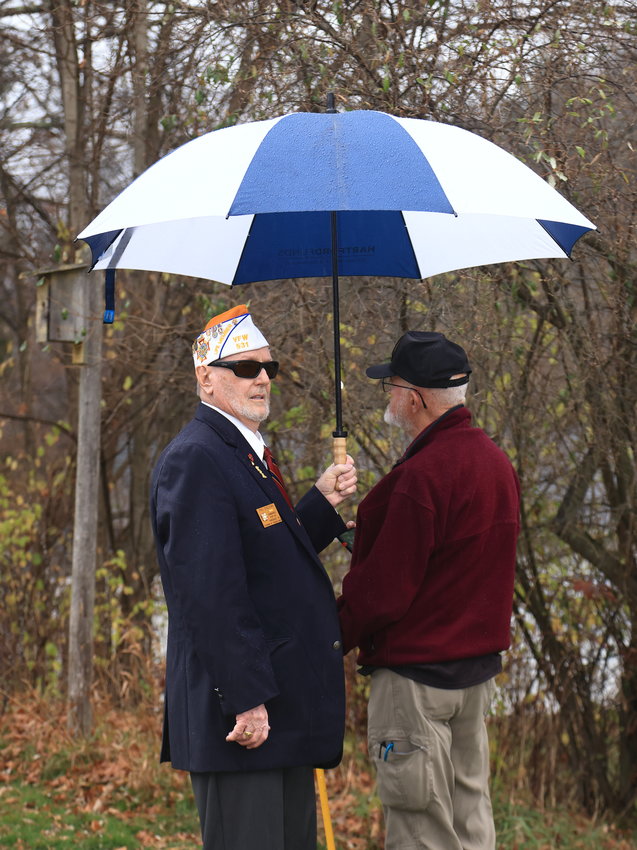 Phil Sheehan, VFW Commander of Post 531 in Honesdale, saw an unidentified veteran standing out in the rain waiting for the gun salute and taps. He offered his umbrella to shield the veteran against the rain. 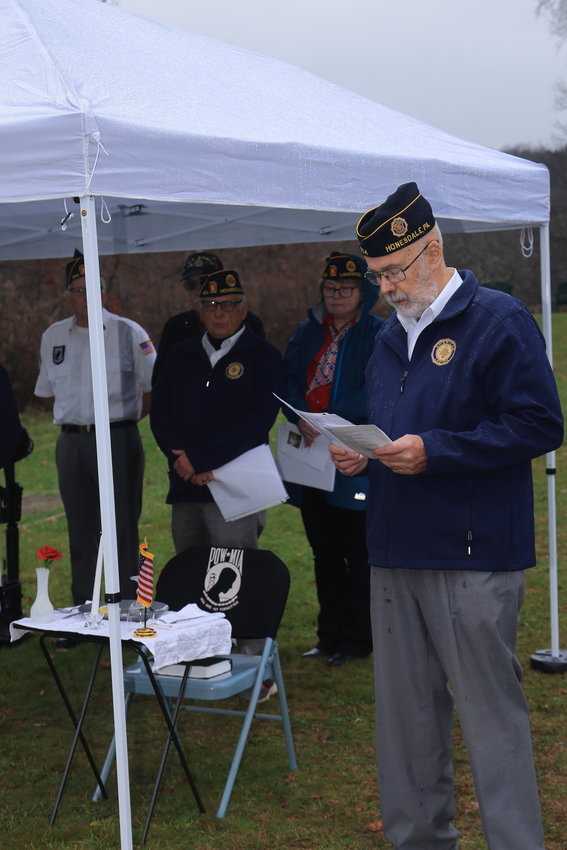 Warren Schloesser of the Honesdale American Legion explains the meaning and symbolism of the POW/MIA table. 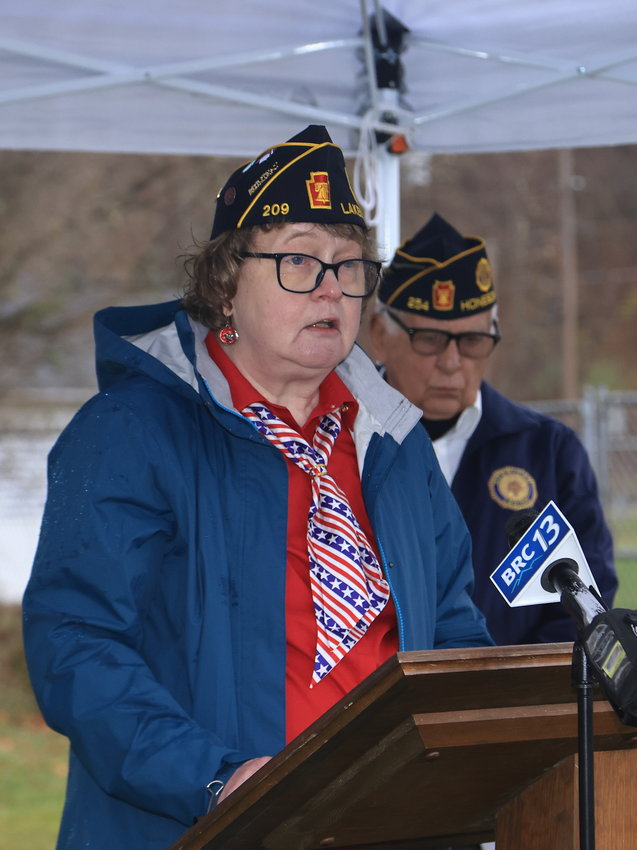 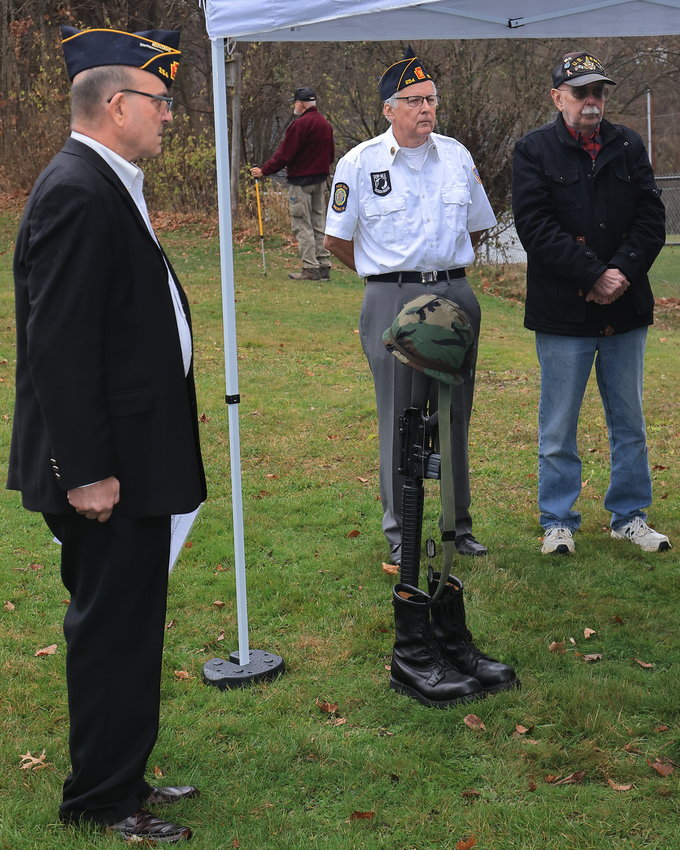 Veterans pay their respects to the meaning behind the soldier’s cross. The cross is made up of the boots, weapon, helmet and dog tags of a deceased veteran.
Previous Next

A joint ceremony conducted by Hogancamp/Schupper Veterans of Foreign Wars Post 531 and the Maj. David McKelvey Peterson American Legion Post 254 was held despite the sporadic rain showers. Pop-up shelters were in place to cover the speakers, members of the Wayne Highlands school band, and the riflemen and coronet player.

American Legion Commander Jim Bruck was the master of ceremonies, keeping the program in order with the customary rituals of the Posting of the Colors, the National Anthem, the Pledge of Allegiance, a poem and a couple of prayers. It was fitting that the heaviest rain held off until the reciting of the prayer for deceased comrades/sisters.

Also covered by the main speakers’ tent was the POW/MIA table, honoring those who were held prisoner or missing in action and who never returned home. The Soldier’s Cross stood under the tent; it consisted of an inverted rifle embedded in the ground with the bayonet and a soldier’s helmet on the rifle butt, a pair of boots on the ground and a deceased soldier’s dog tags. This cross has a long military history, and is now used to symbolize the respect for the fallen among the still-living members of the troop.

Joan Powell from the VFW Ladies Auxiliary explained the symbolism of the Veterans Day wreath lain at the base of the veterans’ monument.

The guest speaker was Victoria Wargo, Wayne County veteran’s services officer, cited statistics that 25 percent of veterans, upon leaving military service, continue their lives in law enforcement. “Bravery and dedication to the community are common among veterans,” she said. There are more than 19 million living U.S. veterans, and more than 4,600 live here in Wayne County, PA, she added.

Wargo also spoke of the increased suicide rate among veterans. “Transitional challenges, the stress of military life and feelings of isolation all factor into a suicide rate that is more than 50 percent higher than that of non-veteran adults. The stigma of seeking help needs to end if we are going to stop veterans’ suicide. It is crucial that we look at this issue much differently than prior generations.”

She said that the national average is 22 veteran suicides per day. In Pennslyvania, Wayne County has the second highest rate of veteran suicide in the state, behind Carbon County.

“Veterans value courage, and it takes courage to ask for help. We must be proactive. Ask and encourage veterans to seek help before they pass a point of no return. It takes a strong  person, not a  weak person, to ask for help,” she said.

The National Suicide Prevention Lifeline is still a functioning number; however, a shorter and easier-to-remember number has been instituted, and is now available across the country: 988, ext. 1 for veterans. When people call, text or chat 988, they will be connected to trained counselors who are part of the existing Lifeline network. These trained counselors listen, understand how veterans’ problems are affecting them, provide support, and connect them to resources, if necessary. Wargo  stressed the importance of spreading the word about the new number—even children know enough to call 911 in case of an emergency, and everyone should be just as familiar with 988. “By calling 988 now, we can prevent a 911 call later,” she said.

The ceremony concluded with a rifle salute, the playing of taps and a prayer. 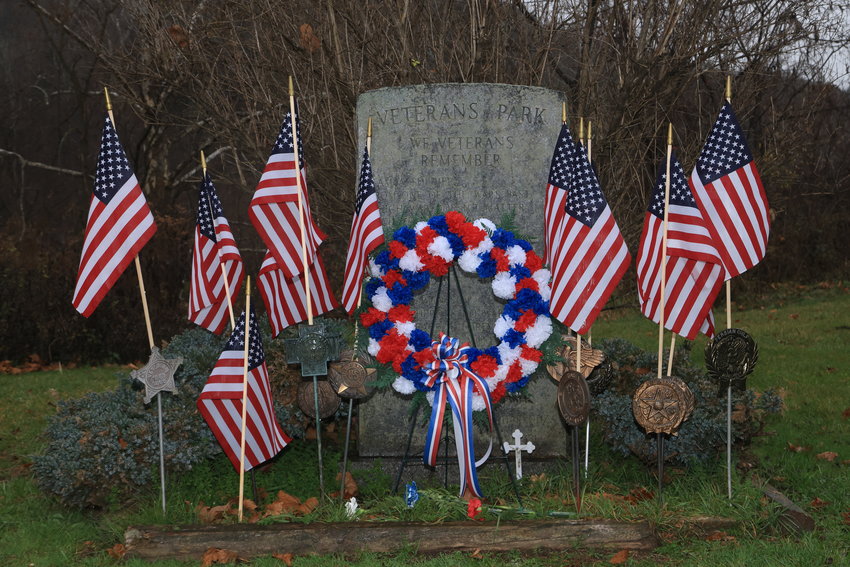 The Veterans Memorial Monument, with flags and a Veterans Day wreath, at Veterans Park, Fair Avenue, in Honesdale, PA, near the pool.