GRAHAMSVILLE, NY — On Saturday, September 25, the Bears of Tri-Valley (1-2) took on the Sullivan West Bulldogs (2-0) in a classic high school football rivalry, a homecoming gridiron clash that …

The ebb and flow of soccer mirrors life
By TED WADDELL

GRAHAMSVILLE, NY — On Saturday, September 25, the Bears of Tri-Valley (1-2) took on the Sullivan West Bulldogs (2-0) in a classic high school football rivalry, a homecoming gridiron clash that saw both teams play their guts out, but was marred by several heartrending yard-losing penalties on both sides on the field.

As the battle on the turf surged from sideline to sideline, the tackles were fierce, as the visiting fans screamed, “Here we go, Bulldogs, here we go!” to the accompaniment of  the sounds of an attention-grabbing cowbell, only to be answered in kind from the hometown crowd, “Let’s go Bears!”

The cowbell must have done the trick for Sullivan West, as the Bulldogs scored at 10:28 in the first frame after the opening kickoff return, and despite a second-half rally by the Bears, went on to win the divisional game, 46-16.

In the post-victory huddle, Bulldogs assistant coach Justin Diehl had words of praise for the team, which is helmed by veteran coach Ron Bauer, now in his 56th season in the game.

“This is one of the biggest wins this program has had in a long, long time, it has so many playoff implications… I can’t tell you guys how proud I am of you,” said Diehl as he addressed the squad. “It was real hard work on both sides of the ball… I’m so happy to see all you secondary guys make sure the first team was ready for this. You really worked your butts off.”

“We knew this was going to be a good game, a showdown for the future, but what really got us was a lot of penalty yards, and we seemed a little flustered at the start,” he said.

Crudele described the different running styles of a couple of his leading rushers, “Dylan Poley is a real power runner, while Brian Kelly is a little shiftier.”

Sometimes you can have the most interesting and illuminating conversation in a parking lot.

As this sports scribbler was packing up his kit after the game, he got talking to Mark Boncek, who played varsity football at the Home of the Bears from 1973-1977, followed by his sons Justin and Jessie.

“Tri-Valley was a real powerhouse in those days, with a target on its back,” he recalled, adding “If a team lost every game, if they beat Tri-Valley, they had a successful season.” 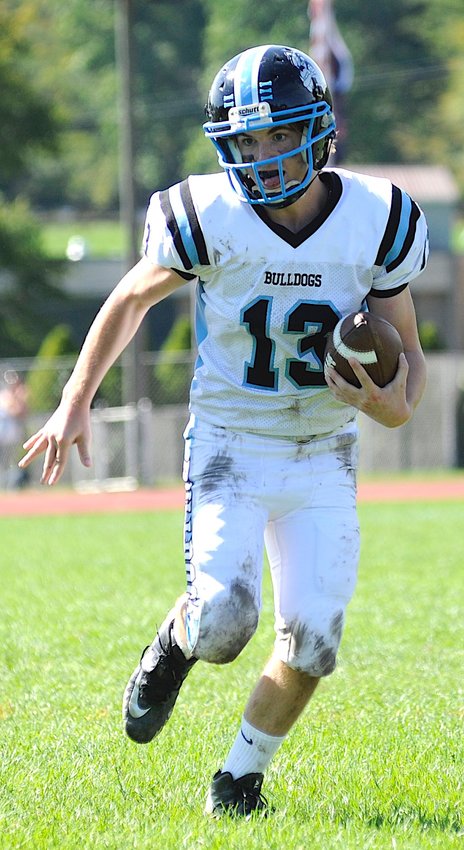 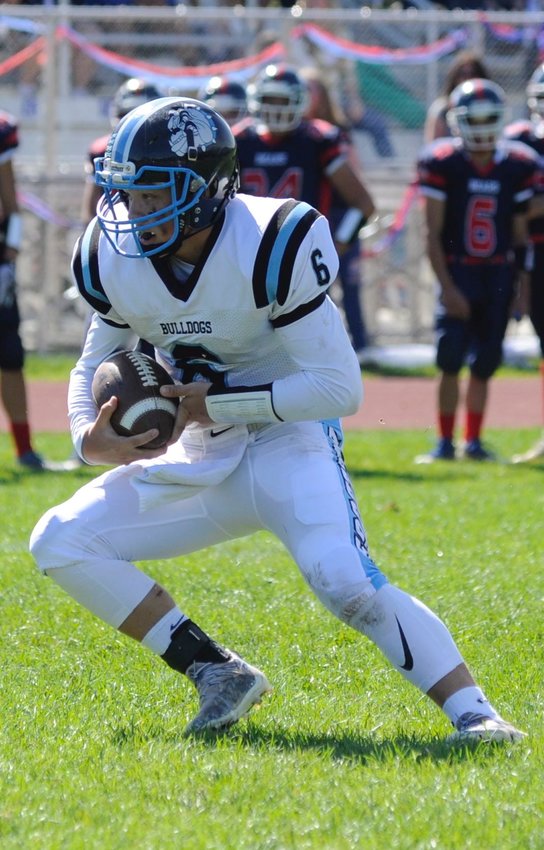 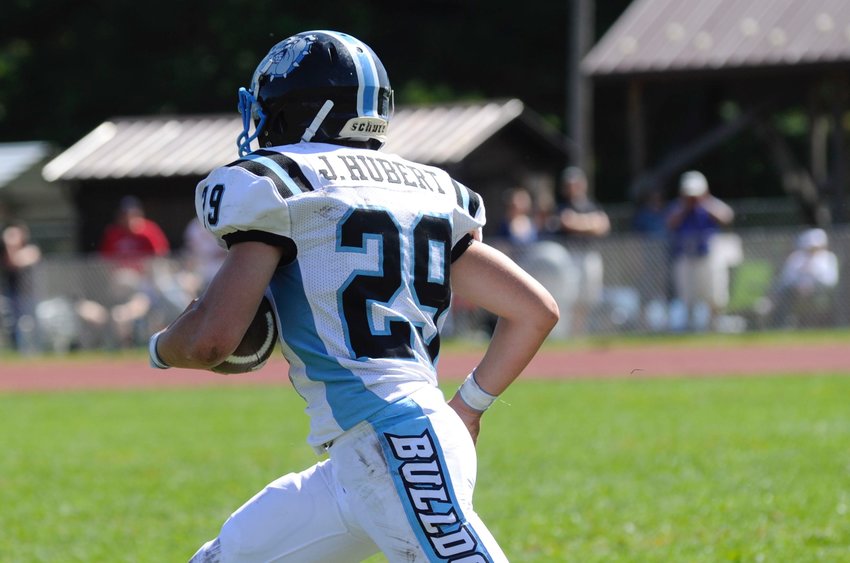 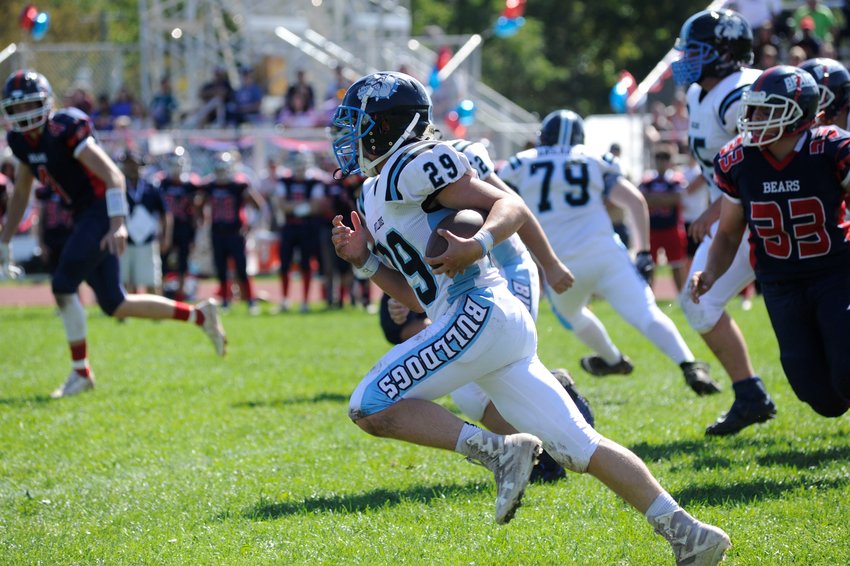 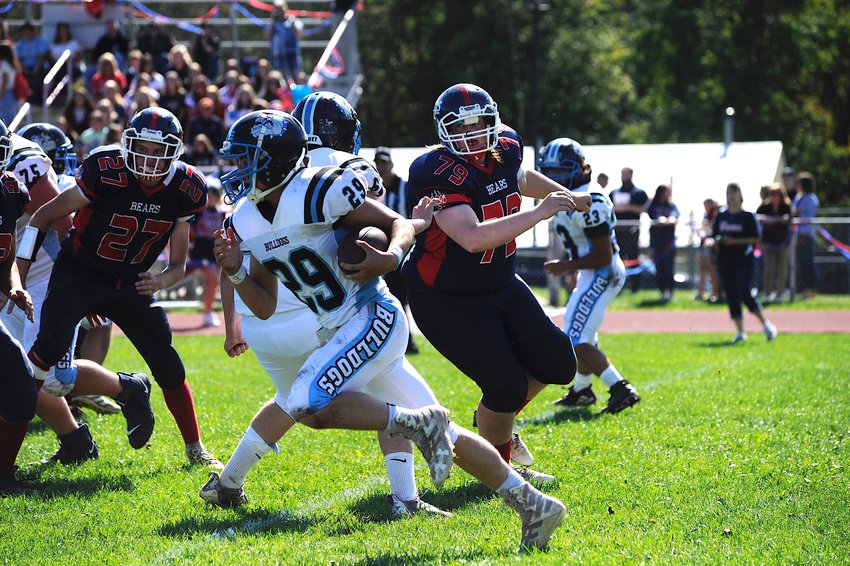 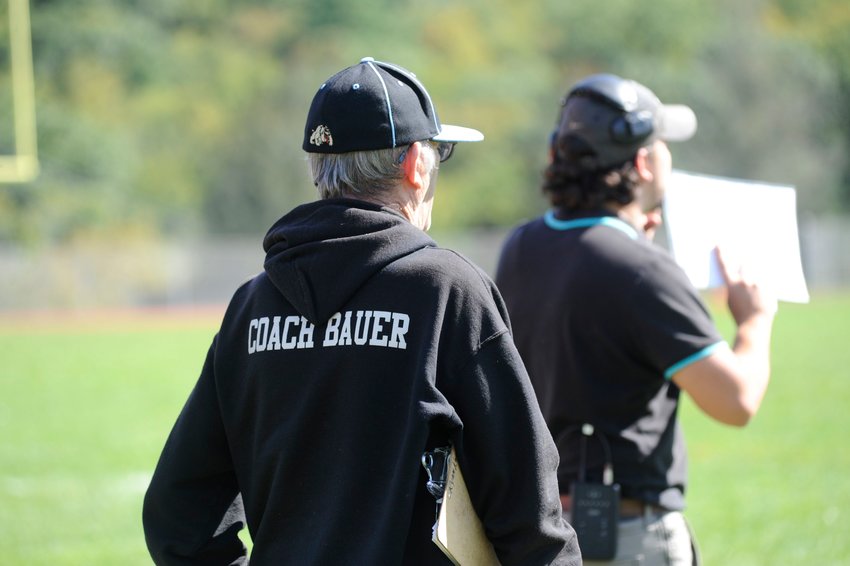 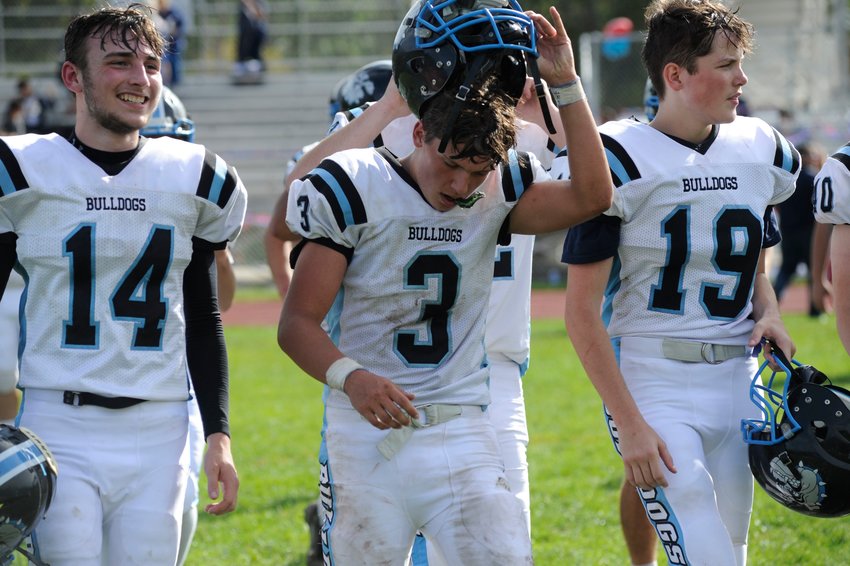 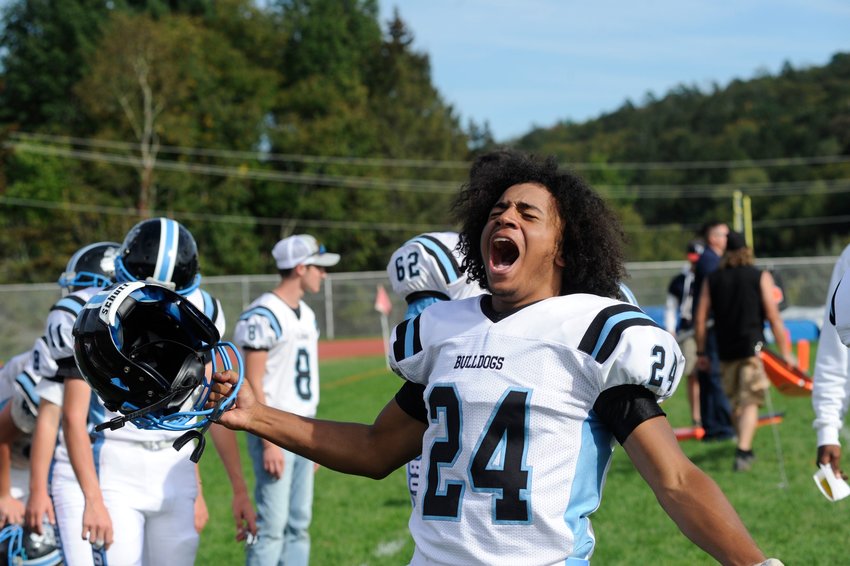 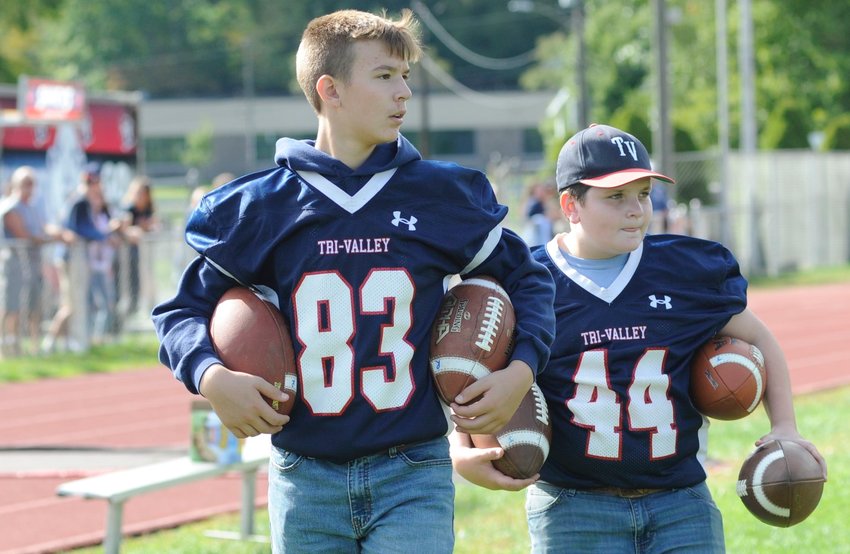 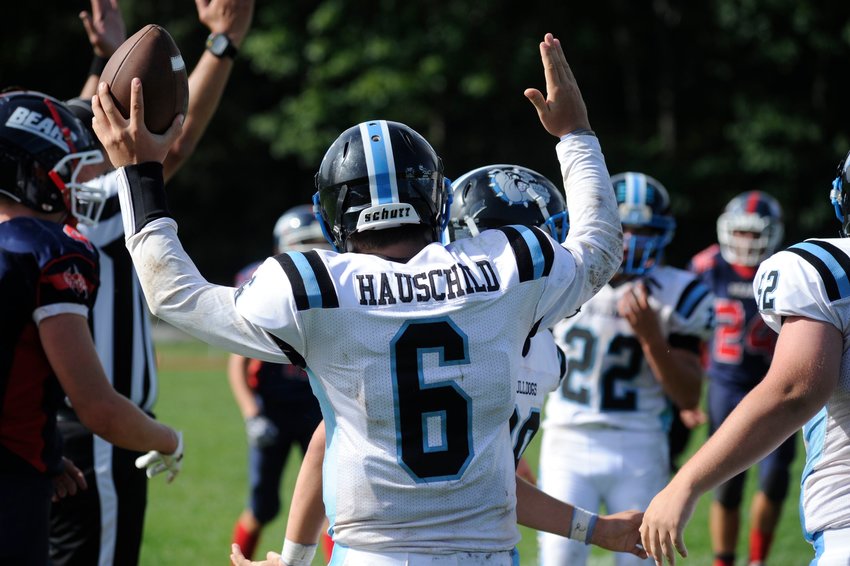 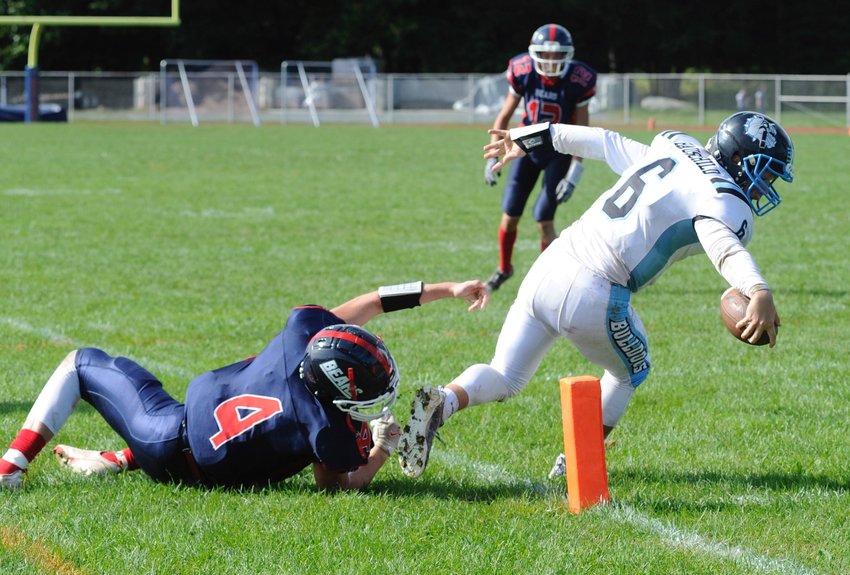 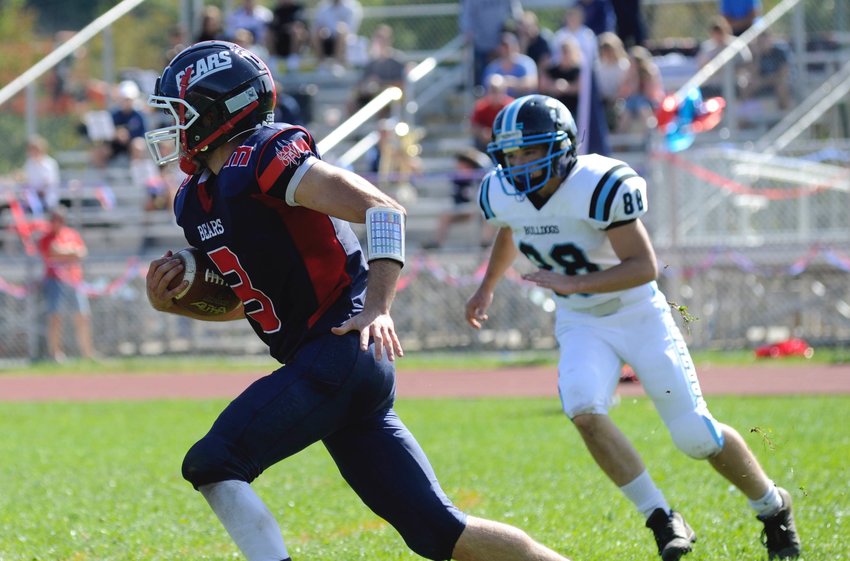