KAUNEONGA LAKE, NY — In a demolition derby, the champion is the last car running, a motorsports subculture-take on the old adage of a champion being “the last man standing.”

RR photo by Ted Waddell
To Myrian with love. The driver of a car dedicated to Myrian slams it into reverse as he sets up to ram an opponent.

RR photo by Ted Waddell
Yeah, but does it have cruise control? Demo drivers inspect what’s left after an event.

RR photo by Ted Waddell
Ask your father what it means. Car #91 displays one of the more colorful names assigned to a demolition challenger.

RR photo by Ted Waddell
Stacked. A common modification to a demo car is to route the stacked exhaust headers through the hood, producing added power and a lot more noise.

RR photo by Ted Waddell
Apocalypse now. In a scene right out of a doomsday flick, Jesse Largess, the driver of “Trump Train 2020,” looks backward at the smoke-filled devastation.

RR photo by Ted Waddell
Chainmail. As a safety measure, steel chains are frequently used on demo cars to secure body parts and bumpers to keep them from flying off during a collision.

KAUNEONGA LAKE, NY — In a demolition derby, the champion is the last car running, a motorsports subculture-take on the old adage of a champion being “the last man standing.”

According to motorsports lore, in 1946, West Coast racing promotor Don Basile staged what was billed as a “full-contact” race between four drivers at Carroll Speedway in Gardena, CA. This followed earlier events held during the Great Depression at rural race tracks and county fairs. 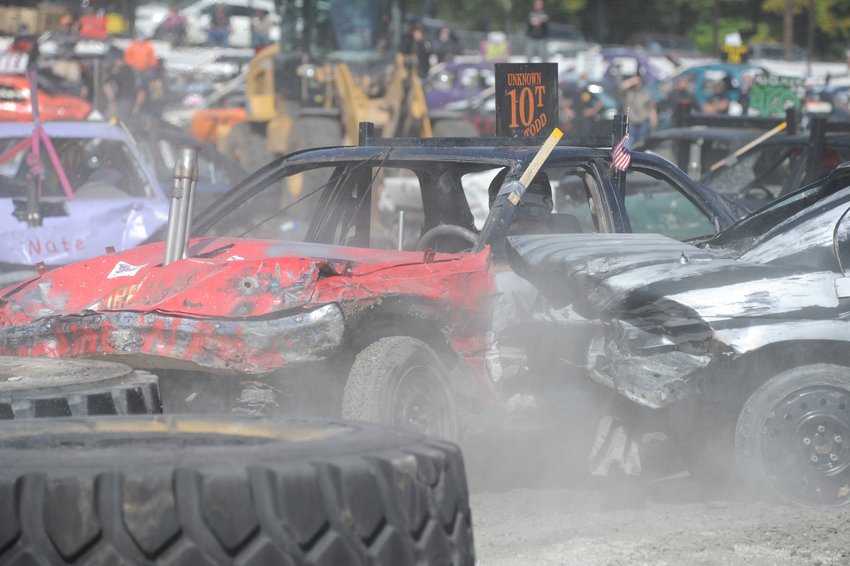 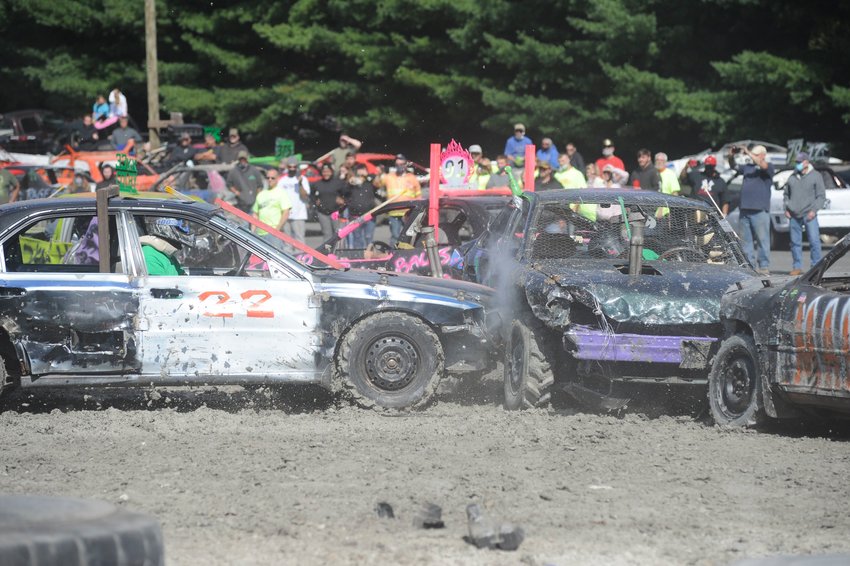 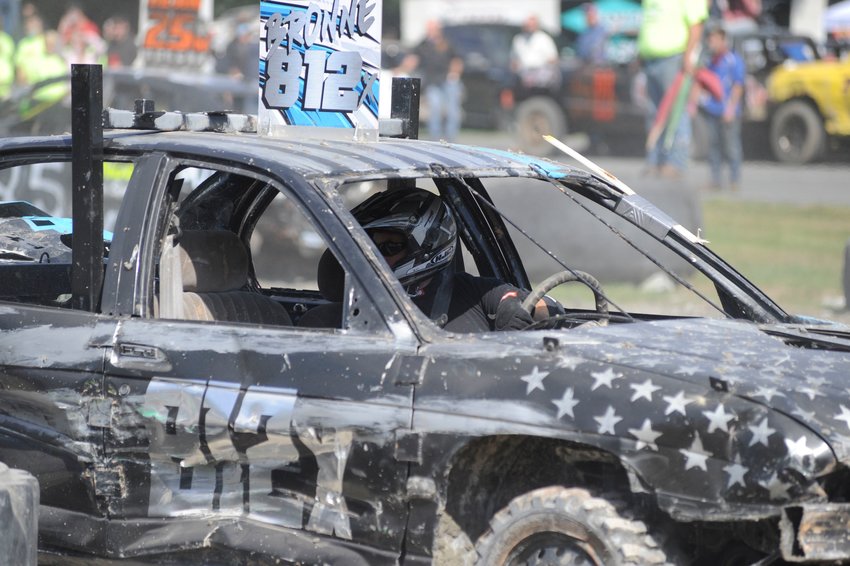 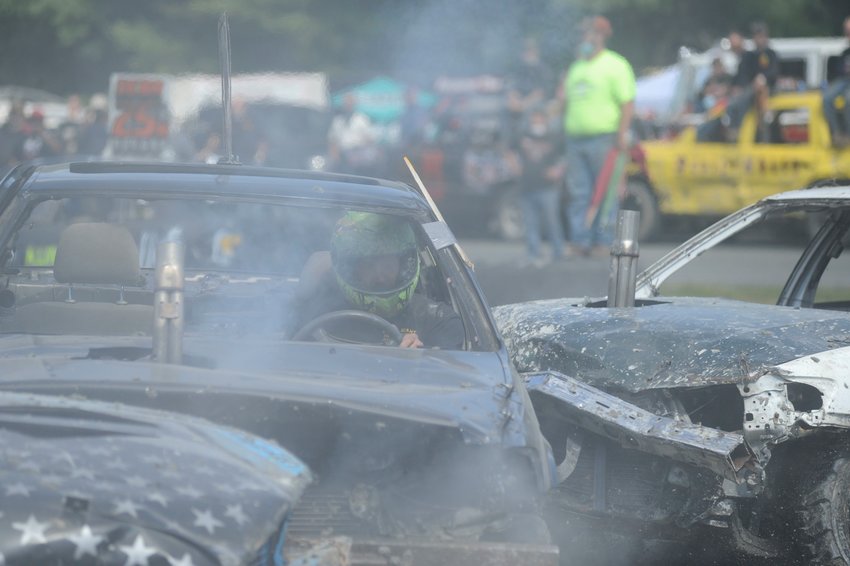 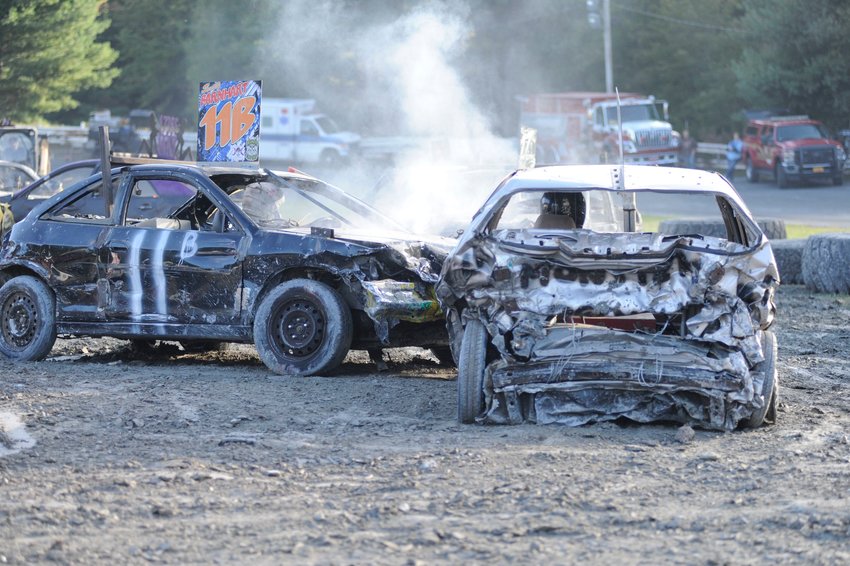 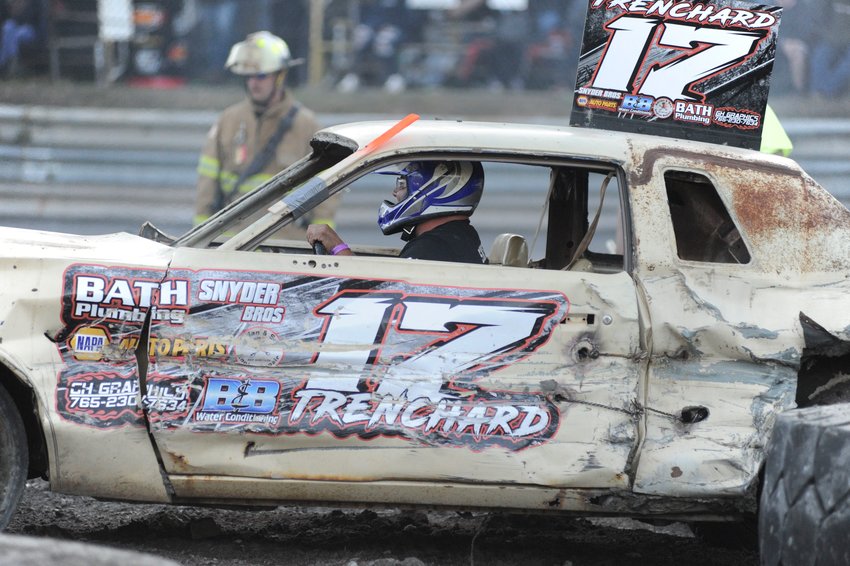 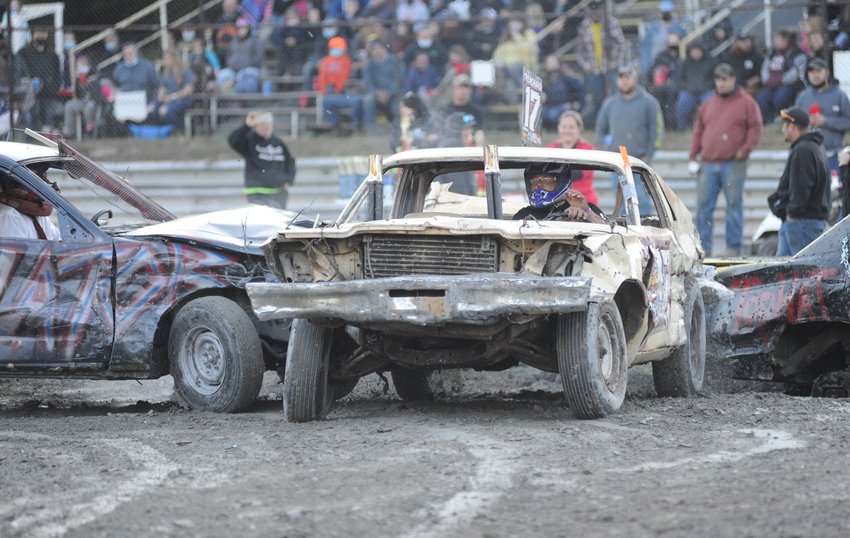 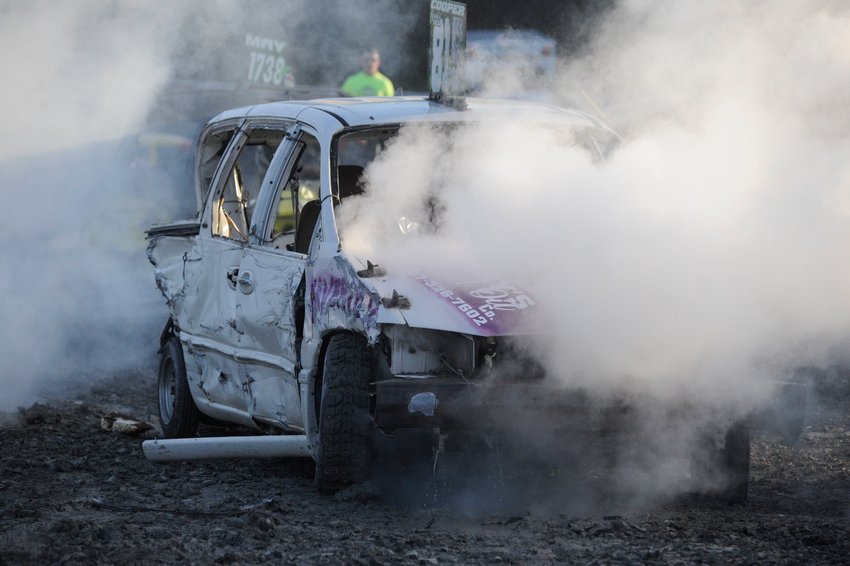 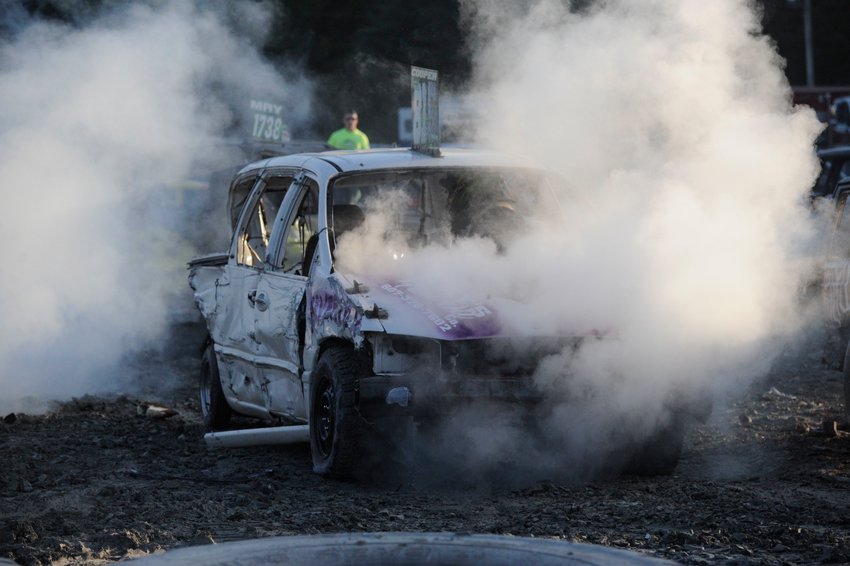 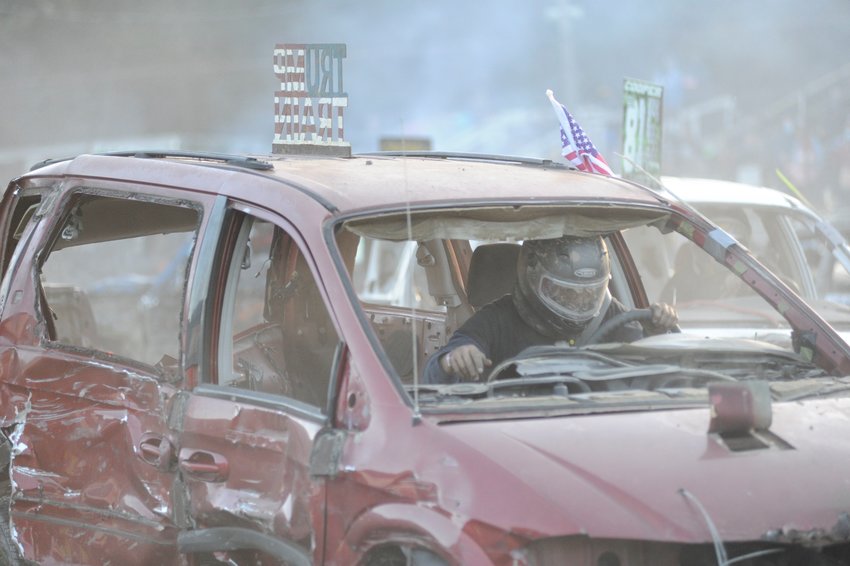 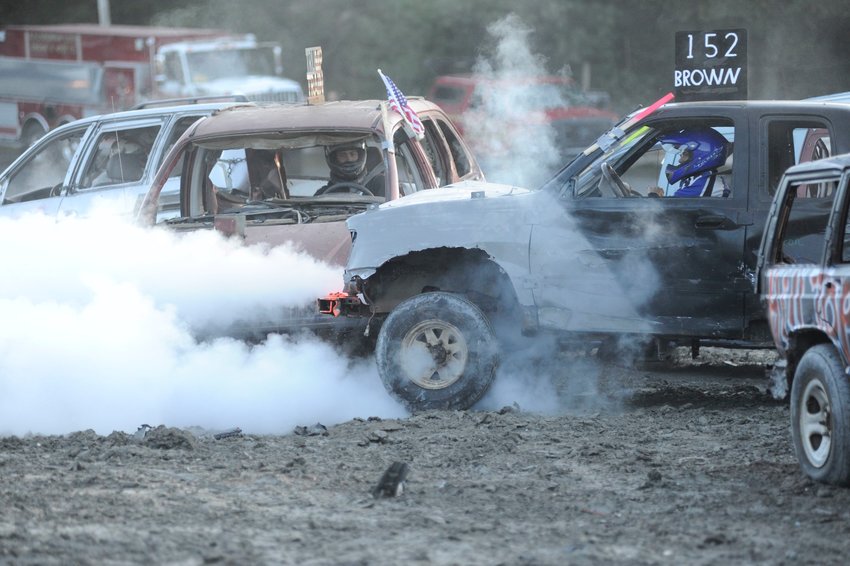 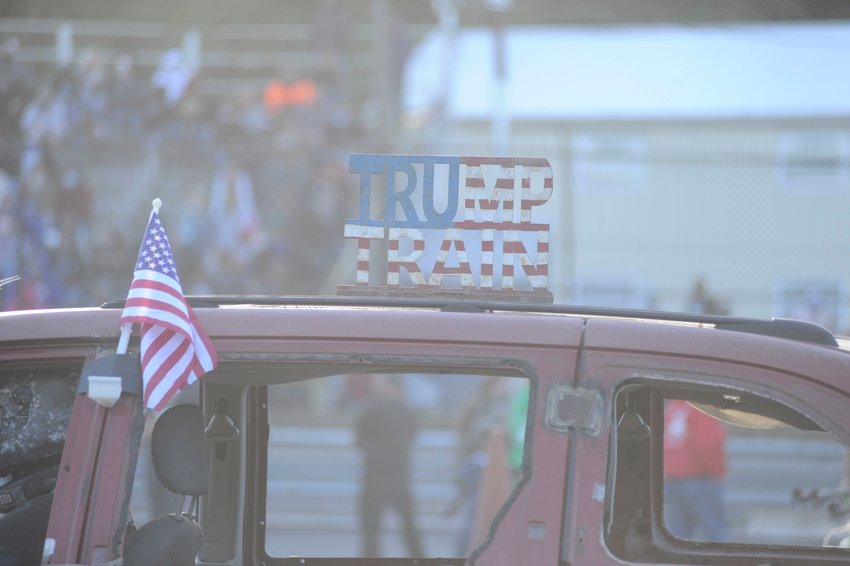 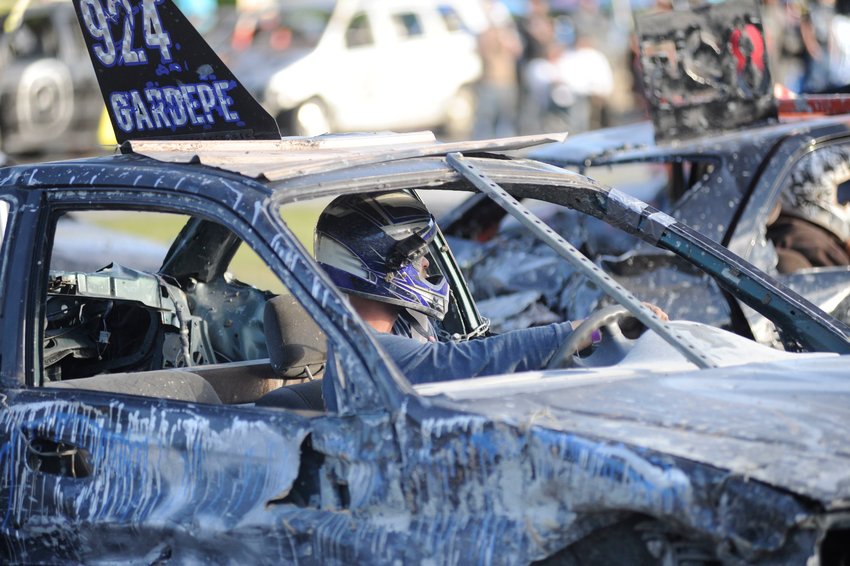 As things moved along, demo derbies switched lanes, expanding from their dawning in the United States to automotive mayhem events in Canada, Australia and England. Crowds gleefully gathered to witness the spectacle of cars being reduced to steaming wrecks, watching radiators burst and bumpers ripped off during the heat of frenzied automotive combat.

In recent years, the sport has staged a comeback of sorts, as folks never seem to grow weary of wacky wrecks on wheels.