Silhouettes on the shade

What fascinates the photographer in me is the story that can be told without revealing too much, or without even knowing what’s happening.

Silhouettes on the shade

Jonathan Charles Fox
This photo combines two of my “artistic” pursuits: silhouettes and pictures of people taking pictures. Remember, if you can see me, I can see you.
Jonathan Charles Fox
My friend Gayle hated having her picture taken, but was happy to pose in the shadow of a silhouette.
Posted Wednesday, July 24, 2019 10:46 am
By JONATHAN CHARLES FOX

For three weeks now I’ve had a song in my heart and the ‘60s on my mind, perhaps fueled in part by all of the Woodstock anniversary hoopla. “Silhouettes” is a song made famous by the doo-wop group The Rays in 1957.

A competing version by The Diamonds was also successful, and crooner Frankie Valli recorded it in 1963, followed by the Ronettes in ‘65. Later that same year, it was a hit in the U.S. for Britain’s Herman’s Hermits, who ruled the airwaves for a spell with catchy tunes like “Mrs. Brown, you’ve got a lovely daughter,” “I’m Henry the VIII” and “There’s a kind of hush”—but I digress.

Silhouette: it’s a good word, albeit one I’ve never mastered the spelling of. Even now, I had to glance at the top of the page to double check what I’ve just written and it still doesn’t look right. But it’s the word itself that resonates, long after the Ronettes have faded into obscurity for all but those of a certain age. Whether it’s used as a noun or verb, Wikipedia defines silhouette as “the dark shape and outline of someone, or something visible against a lighter background, especially in dim light.” 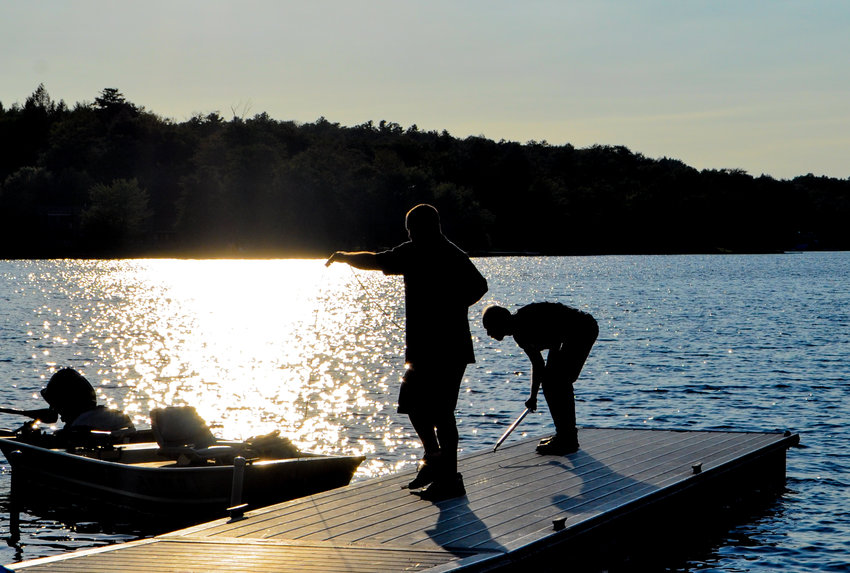 After admonishing me for taking his picture while he was shouting at a passenger, this gentleman approved of the photo and asked me to send him a copy.

What fascinates the photographer in me is the story that can be told without revealing too much, or without even knowing what’s happening. I’ve often run across folks who (like me) don’t love having their picture taken, but when I explain that they are in shadow, and can’t be identified, they often light up. “Oh, that’s cool,” someone said just the other day, when I showed him a photo I had snapped as the sun set over Kauneonga Lake in Bethel, NY. “How’d you do that?” In fact, Mother Nature does most of the work. Down by the lake and set against the evening sky, I often have opportunities to capture sharp outlines of folks as they cruise by in boats and kayaks, or fish off of the dock, while children gambol in the waves and Dharma sneaks off to roll in a dead fish.

“Were you taking my picture just now?” bellowed a disembarking boater, who had been screaming at his passenger about looking at her phone rather than the majestic crimson sky above. “Yes, but I can delete it if you want,” I explained showing the blackened outline of him gesticulating wildly at his first mate. “Wow, can you send me a copy?” he asked upon closer examination. I’m telling you, silhouettes are magical. In fact, I’ve been working on a series of just such photographs for more than a year. “Do one of me!” a kid shouted last week, when he spied me setting up the tripod, which helps steady my hand for a clean, crisp image. “Wait!” he shouted gleefully, “I’ll jump off the dock!”

It’s these photographs that (IMHO) have the power to evoke emotion in the viewer, long after the sun has set on the moment, and which drive me to capture others. Perhaps I’m reading more into it than necessary, in a vain attempt to create “art” where there is none, while looking to express myself by momentarily inhabiting a shadowy, mysterious world that shimmers on the surface of the sparkling waters, allowing me the opportunity to capture private moments caught in a public setting. I’ve never photographed an actual silhouette on an actual shade, since nature’s backdrop is so alluring, but if this incessant rain does not abate, I might be forced to be more creative.

Do you think your photos (silhouette or otherwise) tell a story? Send them to Jonathanfox@riverreporter.com, along with a title or caption, and we’ll post ‘em on The River Reporter’s Facebook page for everyone to enjoy. And remember—I always have my camera… if you can see me, I can see you.

‘They Shoot Authors, Don’t They?’