History plays out in Lackawaxen

Celebrating Zane Grey and the game of baseball

LACKAWAXEN, PA — As most of the country is paying attention to major league baseball’s 2022 divisional playoffs, on a beautiful fall Sunday, a crowd of fans gathered at Veterans Memorial …

History plays out in Lackawaxen

Celebrating Zane Grey and the game of baseball

RR photos by Jeffrey Sidle
A Mountain Athletic Club third baseman puts the tag on the Delhi baserunner, as he slides into third base for an out.
Posted Tuesday, October 25, 2022 11:16 am

LACKAWAXEN, PA — As most of the country is paying attention to major league baseball’s 2022 divisional playoffs, on a beautiful fall Sunday, a crowd of fans gathered at Veterans Memorial Park to watch a vintage “base ball” game between the Mountain Athletic Club (M.A.C.) of Fleischmanns, NY and the Polecats Vintage Base Ball Club of Delhi, NY. The two clubs played a few innings in each of five iterations of the game, using rules dating from 1825, 1857, 1865, 1886 and 1895. Each time period was expertly explained to the audience by Collin Miller of the M.A.C.

The teams are made up of players of all ages, and included a woman, who held her own while playing with the gentlemen. Miller pointed out the connection between generations of players within families as being partly responsible for keeping the teams alive.

Zane Grey’s ties to ‘base ball’

Pearl Zane Grey (January 31, 1872-October 23, 1939) was an American author and dentist. He is known for his popular adventure novels and stories associated with the Western genre in literature and the arts. He also was an accomplished baseball player, and that inspired books like “The Short Stop,” “The Young Pitcher” and “The Redheaded Outfield and Other Stories.”

Grey played summer baseball for the Columbus Capitols in 1889, and was scouted and later signed by the University of Pennsylvania under a scholarship, where he studied dentistry. Grey was a good pitcher and a better batter, but as the rules of baseball changed and the distance between the pitcher’s mound and home plate grew by 10 feet, his pitching prowess diminished, and he was moved to the outfield. He went on to play minor league baseball with several teams, including the Newark, NJ Colts in 1898, and also with the Orange Athletic Club for several years.

The National Park Service, which staffs and maintains the historic boyhood home of author Zane Grey at the confluence of the Lackawaxen and Delaware rivers, was instrumental in bringing all the activities of the day together.

The purpose of this organization is to promote interest in and knowledge of the eminent American author and his works, and to revive interest in his writings. It also focuses, according to the group’s website, on preserving the sites of his writings, so that future generations can realize the contributions made by Grey toward the development of the adventure story in American literature.

The start of play was preceded by the singing of the national anthem in two-part harmony, beautifully performed by Olivia Tighe and Samantha Treppeda, two Wallenpaupack Area High School choral students. The Wallenpaupack cheerleaders were present, and performed a couple of routines. The cheerleader boosters operated the refreshment stand.

The first pitch was thrown out by Terry Bollinger, president of the Zane Grey’s West Society. 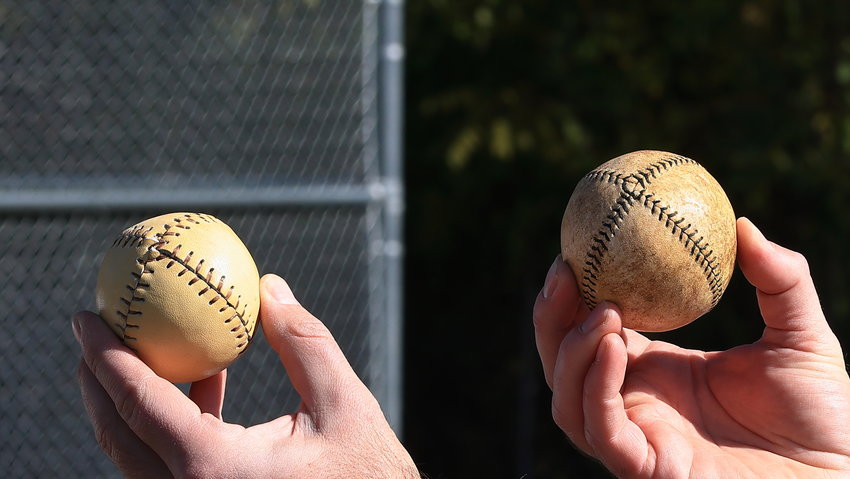 The earliest baseballs were handmade, often by the pitcher, and were smaller, lighter, softer and livelier—meaning that they could be hit further and bounce higher than those in use today. Pictured on left is a ball similar to what could have been in use in 1825. ..It’s a good thing the ball was soft, as a runner could be thrown out by getting “soaked,” or hit directly by a ball thrown by a fielder. The ball on the right is representative of the mid-1850s. The ball became larger, heavier and less lively... 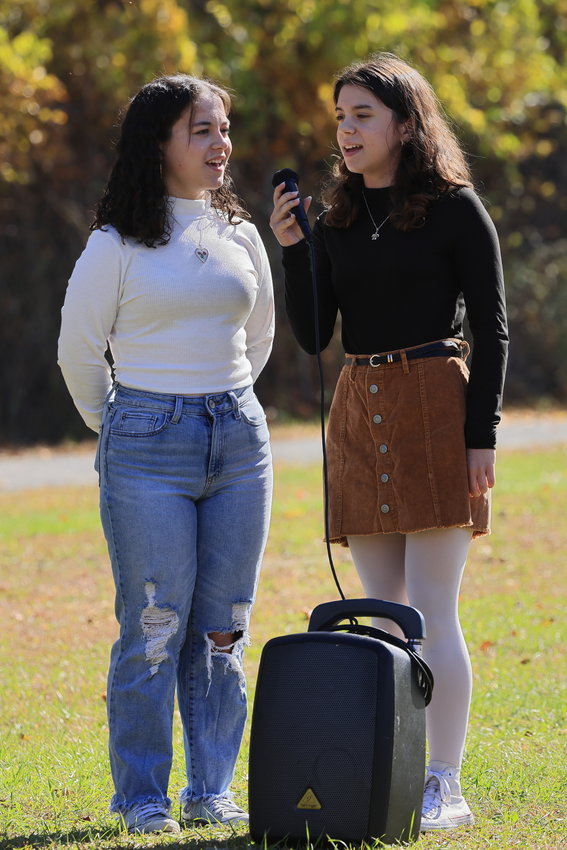 Olivia Tighe (left) and Samantha Treppeda., members of the Wallenpaupack Area High School choral group, begin the day’s game with their rendition of the national anthem in two-part harmony. 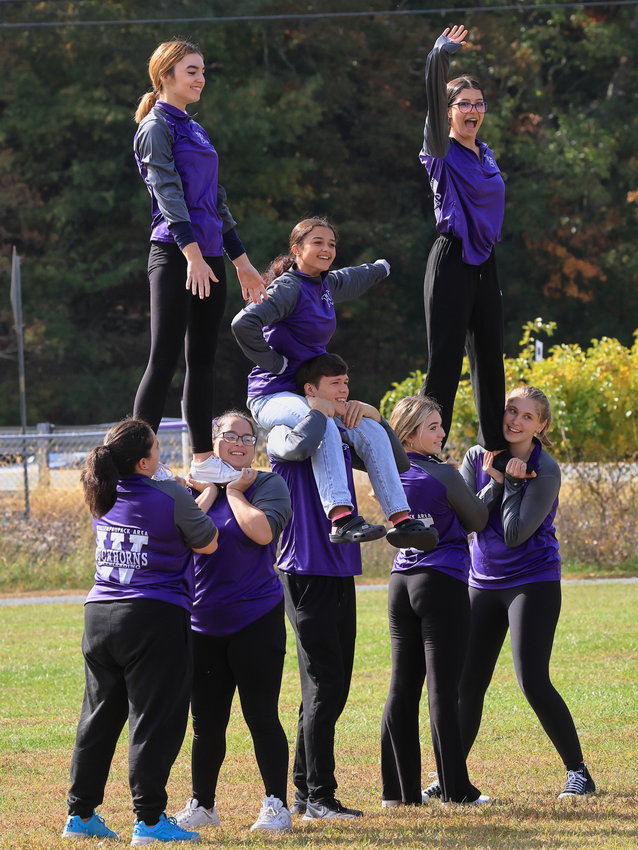 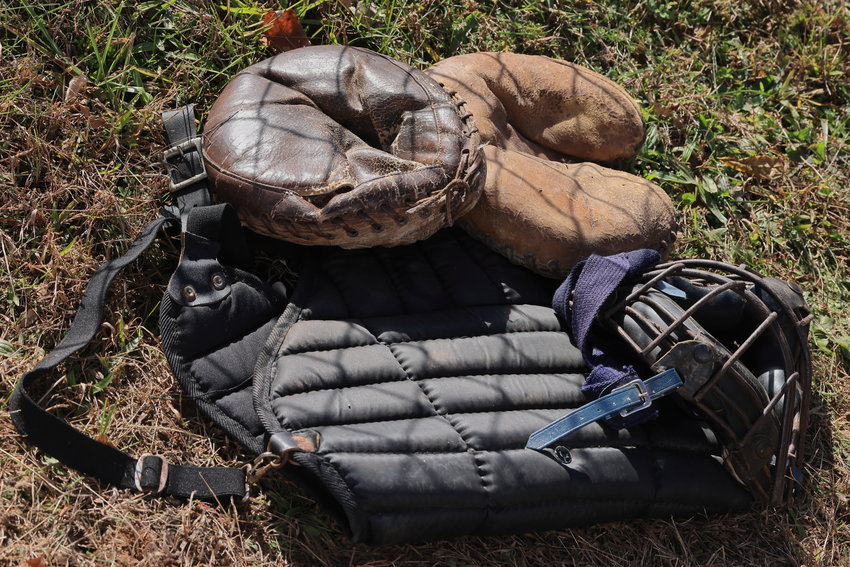 Pictured is catcher’s equipment representative of that in use at the turn of the century. 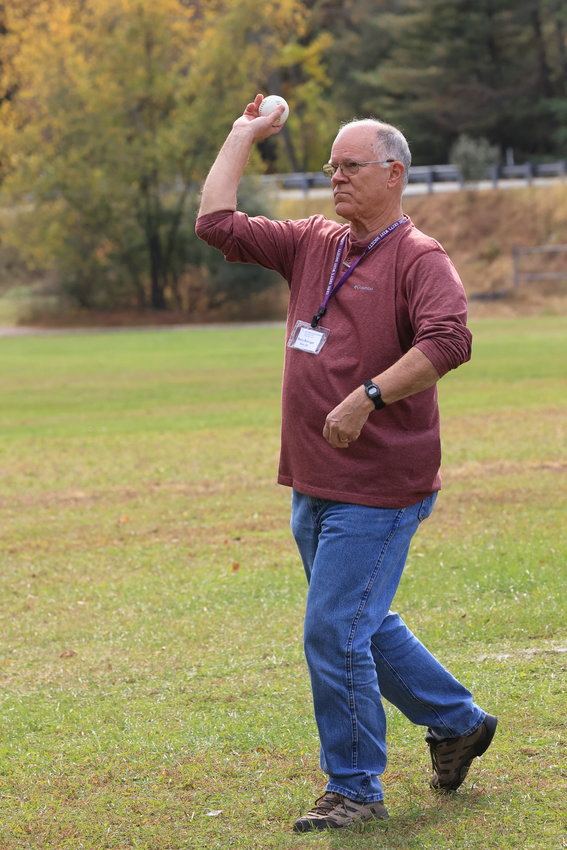 The year 1825 marked what is thought to be the first paid offer to play what was then known as bass-ball, evidenced by a clipping from a newspaper published in Hamden, NY. It is interesting to note that this is 14 years before the widely accepted notion that baseball was invented by Abner Doubleday in Cooperstown, NY, which is now considered a myth.

Rules of the game were not written down until 1845. According to the historical record, wooden stakes were used as bases, and there was no such thing as a foul ball, as players were encouraged to hit the ball anywhere there wasn’t a fielder, including backward.

Pitchers were not held in the highest regard, unlike today, and the ball was thrown slow and underhand, encouraging the hitters to make contact, because that was where the excitement was. A batter could be called out as a result of a fielder catching the ball on the fly, one bounce, or even two bounces. The fielders were also allowed to throw the ball directly at the baserunners. This was known as being “soaked,” and if a player was hit, that would become an out. There were no umpires, gloves, balls or strikes.

The year 1857 saw the beginnings of the codification of the rules, elevating the game to a true sport with the publication of the “Laws of Base Ball” by the National Association of Base Ball Clubs. It was then that the game was defined as nine innings, and bases set at 90 feet apart, with nine men on the field. Foul territory and pitching underhand from 45 feet away were initiated, as well as balls and strikes called by umpires.

In 1865, balls struck into the field of play now needed to be caught “on the fly,” with no bounce, to result in an out. It wasn’t until 1876 that foul balls caught after one bounce were not considered an out.

Batters were allowed to take a base after three balls were called. 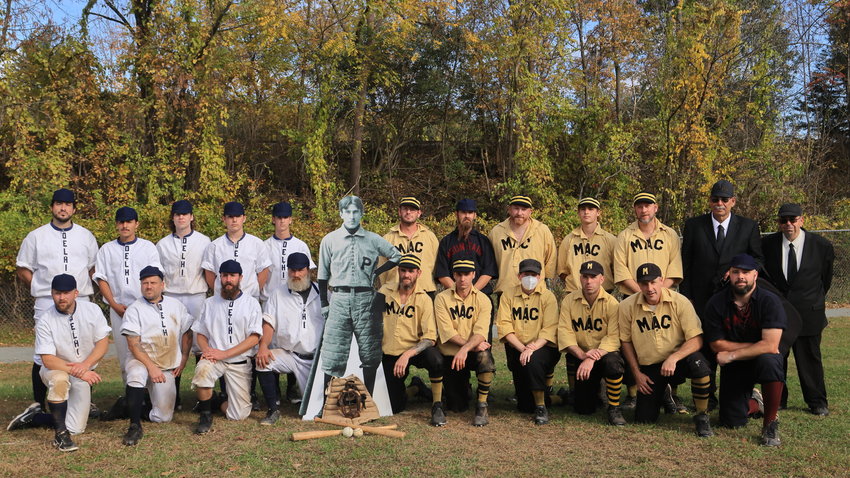 A group photo of Polecats Vintage Base Ball Club on the left, Zane Grey’s likeness in his University of Pennsylvania baseball uniform of the mid-1890s in the center, the Mountain Athletic Club on the right, and the umpires for the day on the far right. 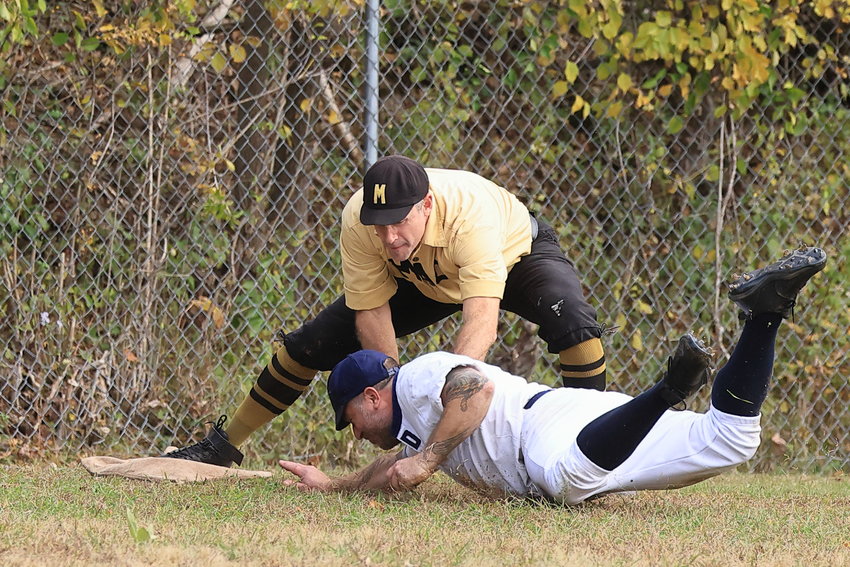 A Mountain Athletic Club third baseman puts the tag on the Delhi baserunner, as he slides into third base for an out. 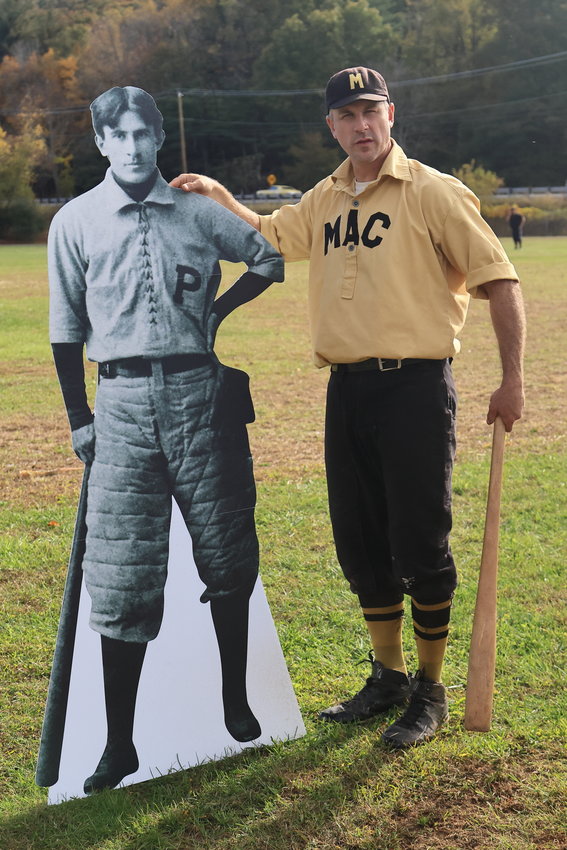 Colin Miller of the Mountain Athletic Club and spokesman for the day, poses with a cutout likeness of Zane Grey dressed in his baseball attire from Grey’s collegiate career at the University of Pennsylvania in the mid-1890s. 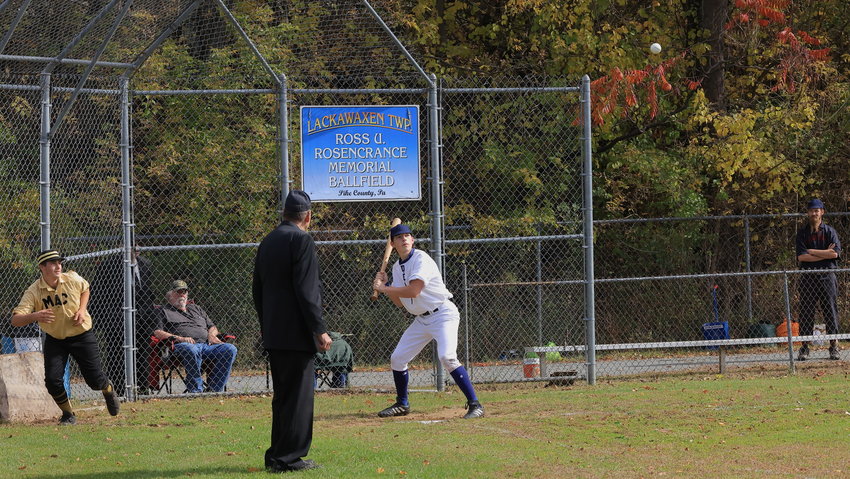 Pictured in the first inning of the 1857-era exhibition game, the Delhi batter has his eye on the slow, arcing pitch visible just in front of and above the backstop on the right. The catcher on the extreme left is moving into position to catch the ball. Note the lack of protective equipment and glove. ..The position of the umpire along the foul line indicates that his duty did not include calling balls and strikes, but was for calling outs and fouls... 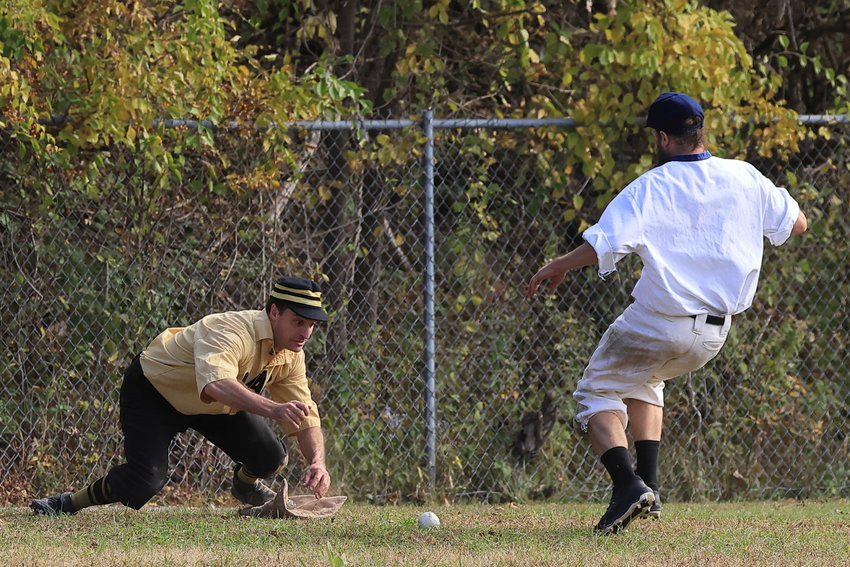 The Mountain Athletic Club third baseman fields the incoming ball ahead of the Delhi runner, thrown by one of the baseman’s teammates to make an out..... 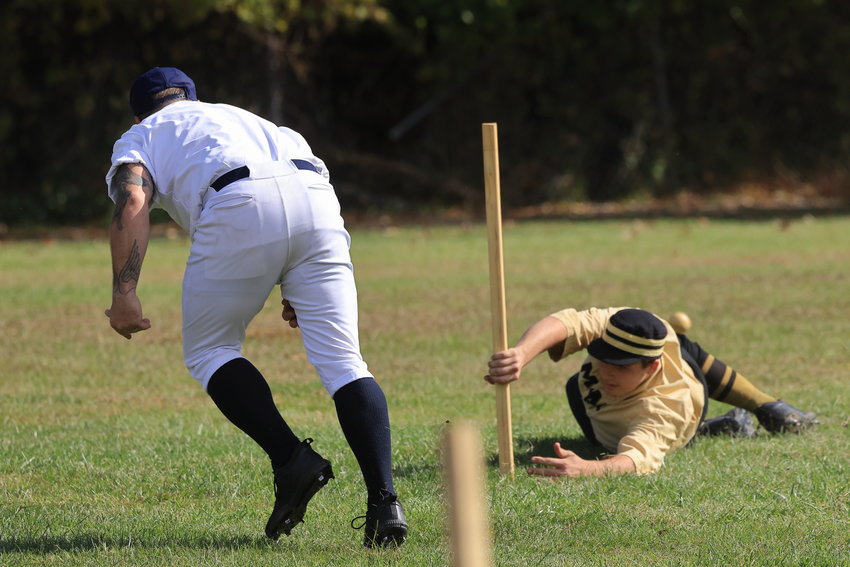 Around 1825, the field was laid out in more of a circle than a diamond, and the “bases” were actually sticks stuck in the field. Pictured is a Delhi Polecat, in white, attempting to “soak” the Mountain Athletic Club base runner, who is safe by virtue of his hold on the stake (base).
Previous Next

The era of choice is 1886 for the Delhi Polecats. Gloves became standard equipment for the pitcher and catcher (on both hands). Pitchers began throwing sidearm or overhand from within a box four feet wide and six feet long. The batter had seven balls to work with, and could call their own strike zone, high or low. Any foul tipped ball held onto by the catcher was an out.

The era of choice is 1895 for the M.A.C. The pitching position was moved back to 60 feet and six inches from home plate, and confined to a plate 24 inches long by six inches wide, still not on a mound. Delivery of the pitch was limited to one step toward the plate. Foul balls were still not considered a strike against the batter except in two instances: a bunt attempt that goes foul, or a foul tip caught and held by the catcher. The bat diameter increased to 2.75 inches (the standard of today), and 1895 was the last year the word “baseball” appeared more often in print as two words. During the exhibition several of the M.A.C. team were wearing gloves in the outfield and were admonished by someone from the Polecats as being a “glove muffin.”

The modern era of baseball is considered to have begun in 1901.

According to Miller of the M.A.C., it is quite possible that Zane Grey played on a team that faced the Mountain Athletic Club toward the end of the 19th century. There are over 200 vintage base ball teams across the country, keeping the evolution of the game’s history alive. Three of these teams are based in Delaware County, NY—the two teams playing that day, as well as the Bovina Dairymen.

For more information, visit Zane Grey’s West Society at www.zgws.org, the Vintage Base Ball Association at www.vbba.org, and the Mountain Athletic Club (M.A.C.) at www.macvintagebaseball.org.

A Night of Giving kicks off December 6

Watch a game, help out SUNY Sullivan students with kids