RR photo by Ted Waddell
Abby Parucki was chosen as the Most Valuable Player in Girls Varsity Golf in 2021. She is pictured here competing in the long jump at a homestand track and field meet.

RR photo by Ted Waddell
Grace Boyd was selected as the Most Valuable Player in Girls Varsity Outdoor Track in 2021.

RR photo by Ted Waddell
Kathryn Widmann was named the 2021 Most Valuable Player in track and field. She broke several personal and school records in shot and discus, along with harvesting Section IX gold.
Previous Next
Posted Wednesday, July 14, 2021 12:04 pm

High School Principal Mark Plescia kicked off the ceremony by congratulating “all of our athletes and coaches for an incredible season and an incredible year...it’s wonderful to see the kids back at their sports...the return to activity is truly a way to deal with this pandemic and move on...”

Adding a few words to the seniors after they graduate, he said to stay involved in their chosen sports, stay active, and “keep playing...” 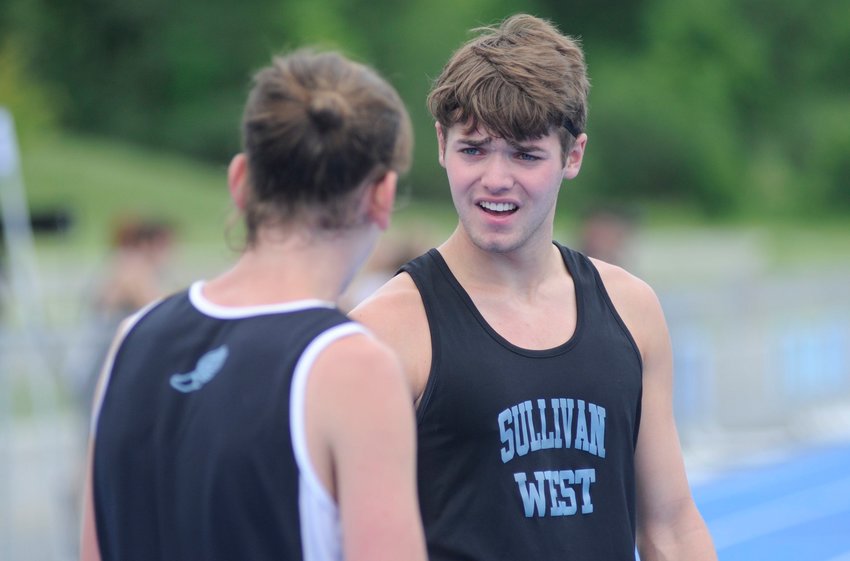 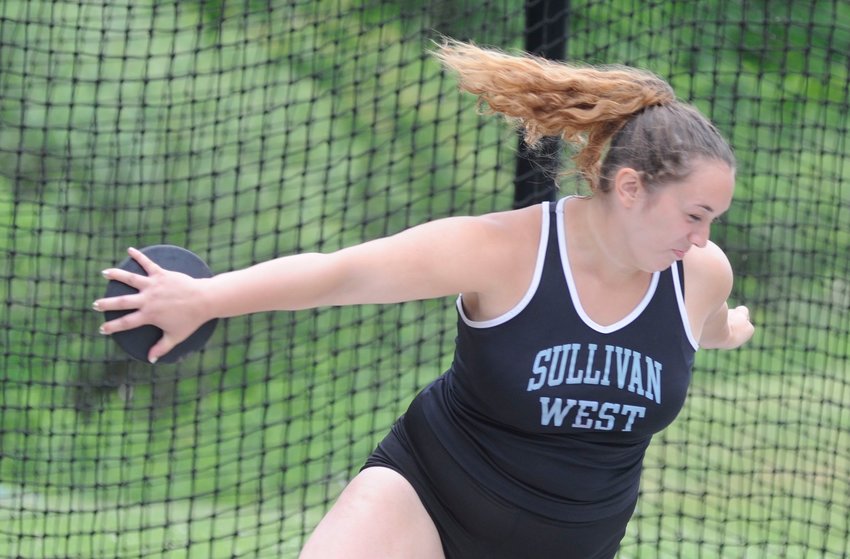 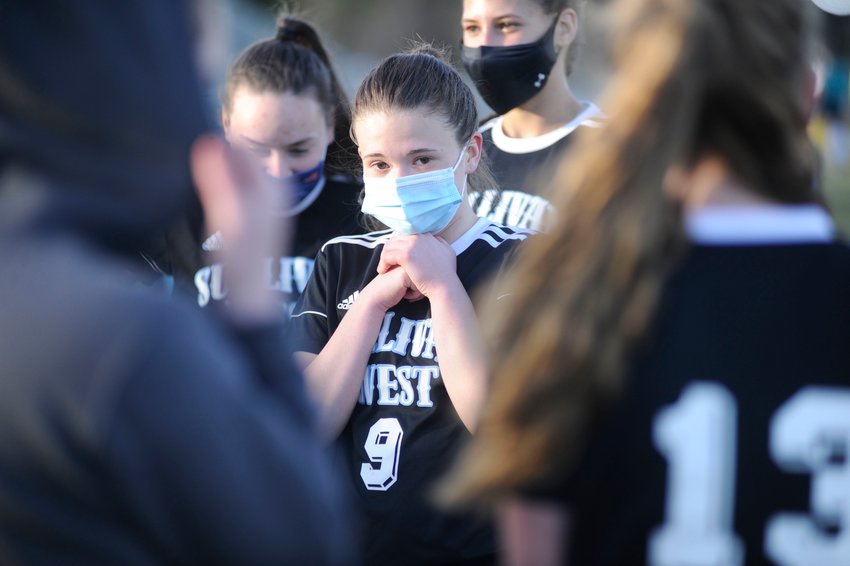 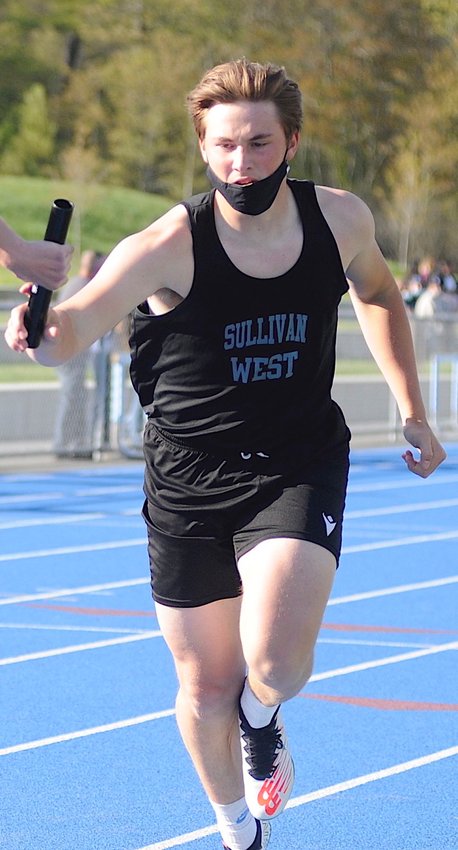 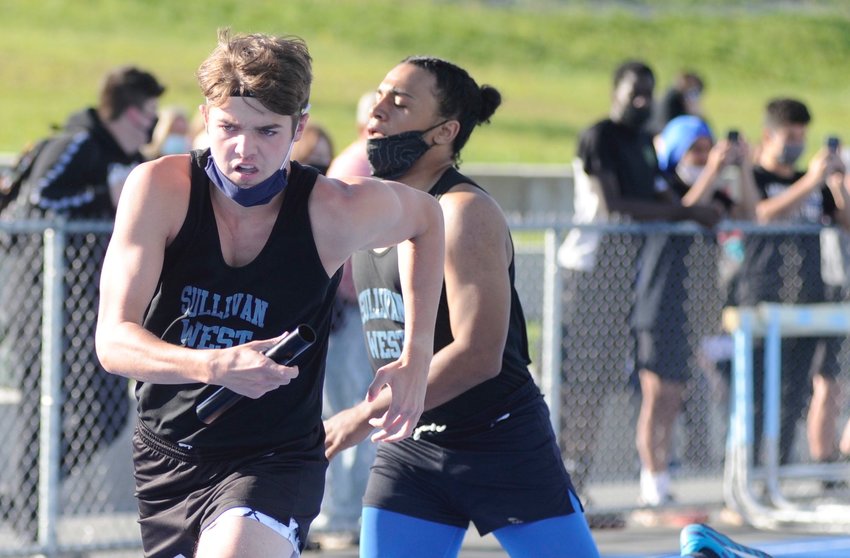 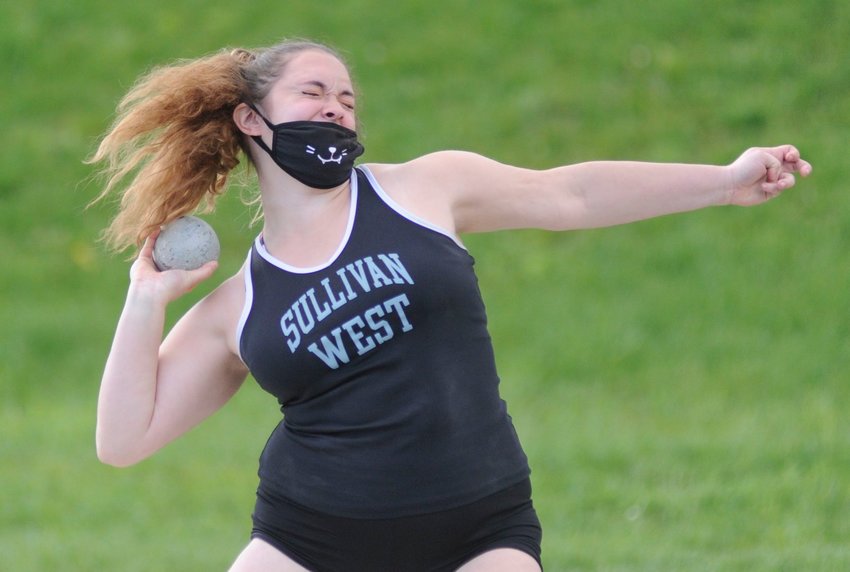 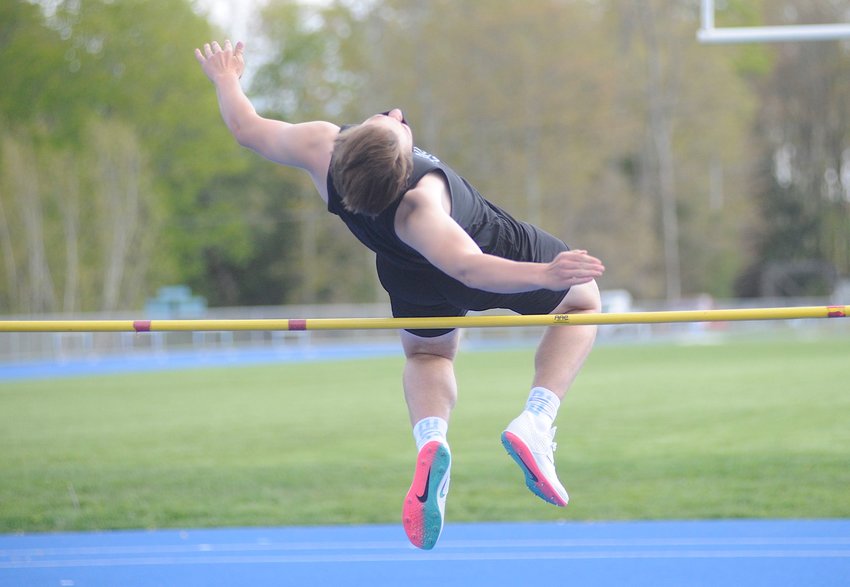 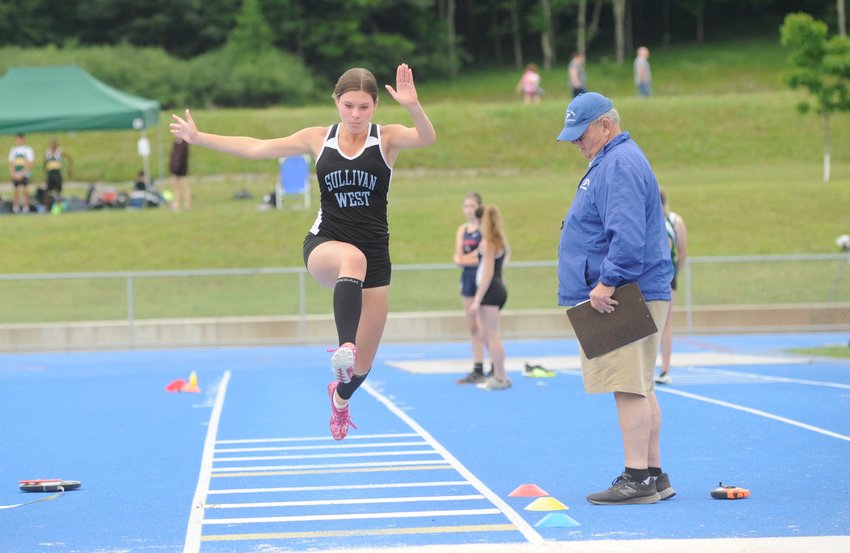 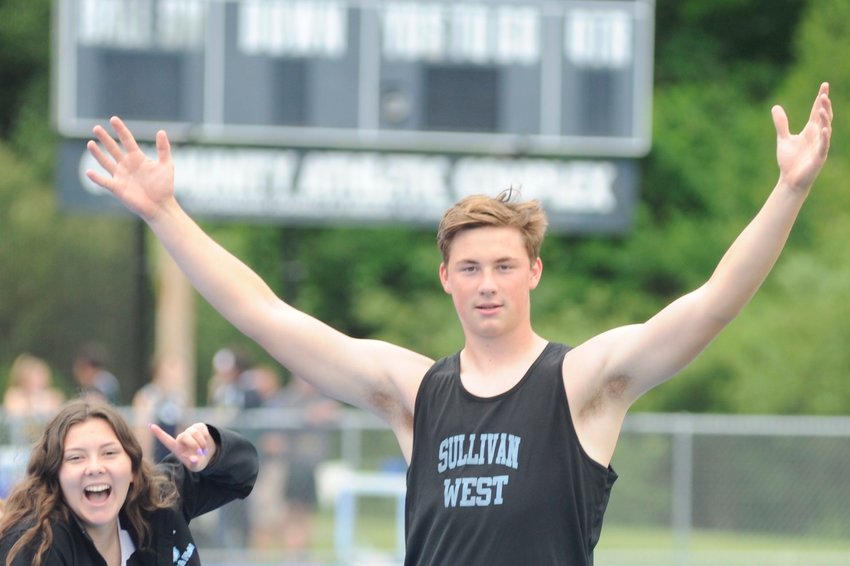 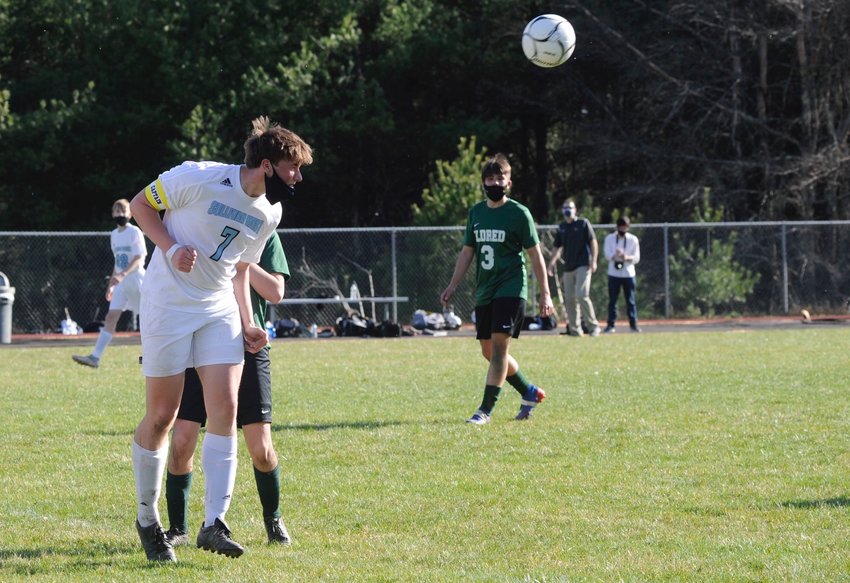 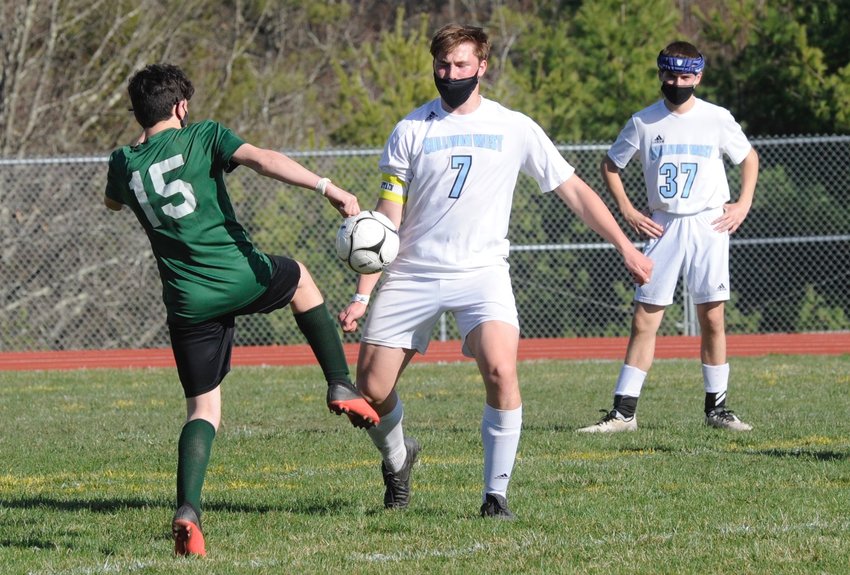 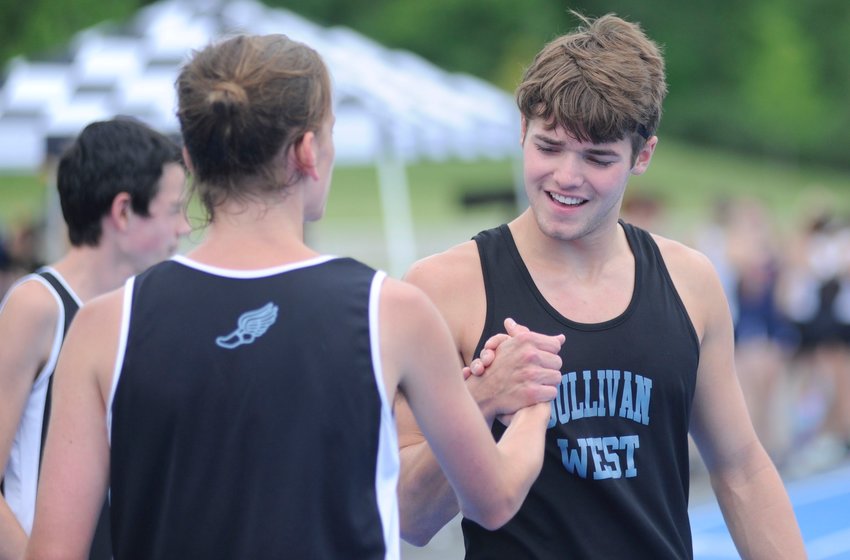 Athletic Director David Eggleton presented an overview of the Spring sports season, and later offered a few closing remarks to bring down the curtain on the virtual awards ceremony.

“...the dust has settled and the air is clear,” he said, referencing the travails of putting on a successful sports program during the uncertainties and ever-changing COVID-19 mandates from Section IX and above.

Eggleton said the Spring 2021 season was the smoothest of the year, and to the graduating senior scholar athletes, said, “We hope you can look back with fond memories at Sullivan West athletics...”

Joe Seidl is in his 10th year as Sullivan West’s girls’ varsity track and field coach, and in his opening remarks noted they were dominate in Section IX from 2015-2019, winning five consecutive championships.

Seidl said that in “normal times” the Bulldogs field 35-40 female thinclads, but recently only 14  girls were on the roster, and to his surprise “they performed at a higher level than I thought they were capable...”, adding that when they took to the field at the regionals, Sullivan West was not the favorite, but finished 2nd out of 8 teams, not too shabby for a small school with limited numbers this season, coming in 14-points behind champion Pine Plains.

“I’m proud of the girls, they showed determination and great fortitude...they showed the same grace in defeat as in victory in years past,” he added.

* Grace Boyd was selected as the Most Valuable Player (Track) in Girls Varsity Outdoor Track.

Of her performance at the regional meet, Seidl said Boyd “had a tremendous day in the mile, half-mile, two-mile and the relay.”

Seidl noted that “to her credit, Kathryn” did not lose once this season in her chosen events of discus and shot.

Widmann picked up gold in both events at the regionals, and broke the 12-year school record several times this year in discus, “finishing with an astonishing 34-feet two inches” almost 5 feet past the existing mark.

“What’s most important is that every athlete has self-worth...at the end of the season discover inner-strength...” added Seidl.

Skylar Musa served as the Head coach of Sullivan West’s boys varsity track and field team, and began her presentation by congratulating the Bulldogs boys and girls track & field team for their 2nd-place finish at the Section IX Class D Championships.

She explained that one of the keys to winning a track & field championship is depth in numbers, and as a result of a limited “bench” this year, the boys’ team was at a distinct disadvantage.

“He was very respectful to other kids on the team, said Musa, adding, “He represented the school very well.”

Of the team’s “lone senior”, Musa commented, “He was very versatile, it’s almost impossible to find a kid like that...he did pretty well in three events at the end of the season in shot, discus and pole vault” and in addition tried his hand at the high jump.

“Moving forward, there is so much potential in our track and field program...it’s not going to be easy, as we’re going up against a couple of much larger schools, real powerhouses, with very deep rosters,” said Musa in wrapping it up until next year.

Anthony Durkin took a break this year from chasing snakes off the soccer field to serve as head coach of the Sullivan West Lady Bulldogs varsity softball squad.

“At the beginning of the season we absolutely knew we were very inexperienced team,” he said, noting that the squad lost 9 seniors that never got a chance to play the game of swats, and only fielded one returning player from the previous year.

“So we were very young, had one practice and then ‘poof’ ten kids were quarantined, so we only had ten kids until everybody got back”, said Durkin, continuing that the coaching staff always stressed the importance of practicing, which later started to pay off after a wipeout in the first game against Seward, followed by steady improvement, although the year’s end record didn’t really show in the final tally.

“We showed a lot of improvement, just couldn’t put a full seven innings together, it was a tough schedule for a young group, a lot of back-to-back games.”

“She lives and dies for softball,” said her coach, noting that Ernst was the only returning player with varsity lever experience, adding that during the previous two seasons she anchored the hot plate, before switching to the mound as a pitcher this season.

“She had two homes runs at the Jeff field, and was big help with the younger players.”

* Nicole Reeves earned honors at the team’s Utility Player of the Year.

“She played at least three of four positions, was batting well at the plate, and always played with heart and determination” said Durkin, adding that Reeves, a freshman, ended the season with the team’s highest batting average.

“I’m looking forward to seeing what this young lady can do over the next three years,” he said.

“This season was quite different than past years,” said Bill Kirk, head coach of the Bulldogs varsity baseball team, referencing the changing protocols mandated as responses to the pandemic, including an abbreviated and accelerated hybrid schedule that on occasion meant several games per week.

The Bulldogs brought several younger players up to varsity, and only had a couple with any type of varsity experience.

“As expected, the season had quite a few teaching moments, with mistakes early on,” said Kirk, explaining that in their first two games of the topsy- turvy season, they lost them by a combined score of 31-2.

At about game #6, “they started to believe in themselves” and went on to win three straight before ended the season 4-9.

“I think next year’s squad can be a challenger for the divisional title,” said Kirk.

Patrick Donovan, head coach of the girls’ varsity golf team, summed up the year, “Wow, what a season.”

* Abby Parucki was selected as the Most Improved Player in Girls Varsity Golf.

“Abby was a freshman who was new to golf this year, and as an athlete she picked up the game very quickly...will be a fixture of the golf program for years to come...” said Donovan.

Of the multiple sectional qualifier and five-year member of the team, Donovan said, “She is the leader the other girls look to for help, guidance and to make them laugh...next year, she will make some noise in Section IX.”

“This year was a great year, they never gave up, always tried their best to be the best they could be,” he said of the season.

“He has improved greatly, and as a ‘coach’ on the course with me and without me, he helped all the other plyers get better,” said Meyer.

* Rally Cruz was named the Most Valuable Player in Varsity Boys Golf.

“He was new to the team, but came out and was our most consistent golfer, and had the lowest scores,” noted Meyer.

* Daniel Hemmer. In the words of Kirk, “A gifted and talented player, but also a leader who works well with all his team mates and coaches, a determined and dedicated athlete...always looks for ways to be the best he can be...looks to inspire excellence and dedication in his team mates, helped the team navigate through a truly challenging year... exceptional in sharing what it takes to be a varsity player...led his team in batting average, RBIs and hits..” and from basketball coach Meyer, “a leader by example, a great role model...a coach on the court, a tremendous worker...”

* Taylor Allen. “I’ve had the pleasure of coaching this young lady for the past four years...ground it out on the course trying to hone her game...during matches I tried to pair her up with younger players so she could show them the ropes of golf...contributed to multiple golf championships...”

And from Durkin, one of her soccer coaches, “a team leader and a very positive player...”

* Owen Sager. “We honor Milt’s dedication, perseverance, determination and loyalty to sports,” said Meyer of when the coaching staff meets to select the winner, adding that Gaebel’s philosophy was rather simple, ‘If what you do is worth doing, then you need to give one-hundred percent effort’.

As his basketball coach, Meyer said “You are a true leader by example, a great role model to our younger players”, and from baseball helmsman Kirk, “the glue that kept the team together, positive and self-confident, a superior athlete...”

* Jordan Sullivan. “She worked her butt off to improve herself over the last four years,” adding a sports homely of sorts, “hard work beats talent, when talent won’t work hard’, saying of the award recipient, “Day in, day out, her dedication to get better made a strong contribution to the soccer and track teams...great teamwork, a role model and a pleasure to coach...”

* Ryan Mace. “Your impact at Sullivan West has gone way beyond the court, the field, the track...you did what you could to help your team win...the coaches were impressed with your ability to truly be a leader by example...”, said Meyer.

* Emily Bair. “...a leader, excellent team mate, hard-working athlete...dedicated to all her sports, a coach on the field and an impact player,” said Durkin, adding that former NFL wide receiver Jerry Rice summed up Bair’s commitment to sports, with a quote, ‘Today I will do what others won’t, so tomorrow I can accomplish what others can’t’...this young lady lives by that motto, in three different sports to accomplish major success...”

* Emily Bair. According to Nober, the annual award is presented to a scholar-athlete who is a “good student, a volunteer in the community, with a passion for sports, one who wants to make a difference in society by helping others.”

Mace was 12th in the Class of 2021 with a 94.18 GPA, lettered in three varsity sports, was a 4-year starter on the boys soccer and outdoor track teams, and a 3-year starter on boys basketball squad.