A passion for speed

A passion for speed

RR photo by Ted Waddell
Tom Crompton and #10, a faithfully restored “Big Car” from the late 1930’s...
RR photo by Ted Waddell
Don’t look back, something may be gaining on you. #10 passes the flagger’s stand at Bethel Speedway’s popular Danbury RaceArena Night on July 24, 2021...
RR photo by Ted Waddell
Vintage iron. Tom Compton’s #10, the legendary was built by NEAR Hall of Famer Louie D’Amore, and first raced at Thompson Speedway in CT in 1939.
BILL GORDON
Tom Crompton poses with #27, the “Tomahawk Special”, constructed on a Model A Ford frame by Pappy Woods of Maine. For more photos of this restored barn find and Crompton’s escapades at speed on vintage race bikes, see the sidebar...
Previous Next
Posted Wednesday, August 4, 2021 3:39 pm

Once the green flag goes down, it's 'let's go buddy,' you're in it with both feet the whole way.”

Racing against the storm
By TED WADDELL

As a member of the Atlantic Coast Old Timers (ACOT), he showed up at Bethel Speedway on Saturday, July 24 at the local track’s Danbury RaceArena Night, in homage to the famous track in Connecticut. In days past, it was a focal point of the Great Danbury State Fair.

So, return with us now to the days of yesteryear, as Crompton and a cadre of die-hard old racecar collectors and preservationists show off their faithfully restored rides to the fans in the stands during one of the track’s most popular events. 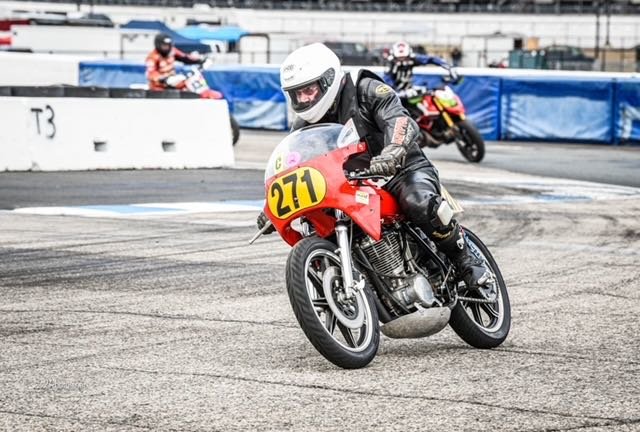 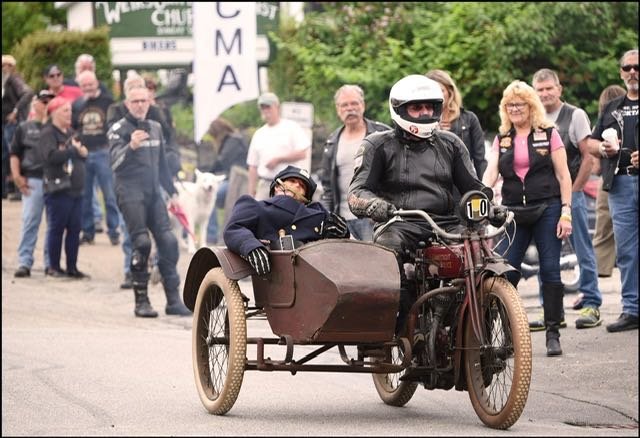 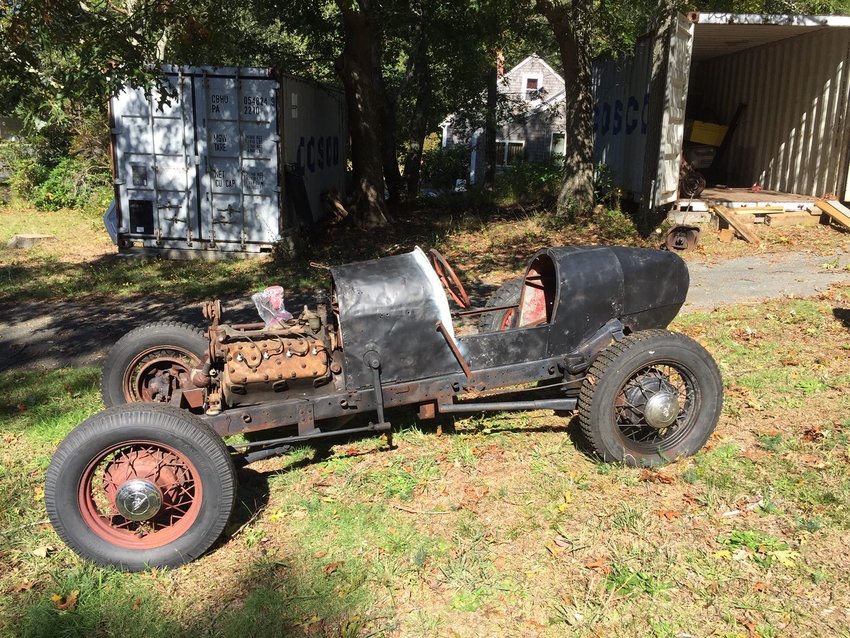 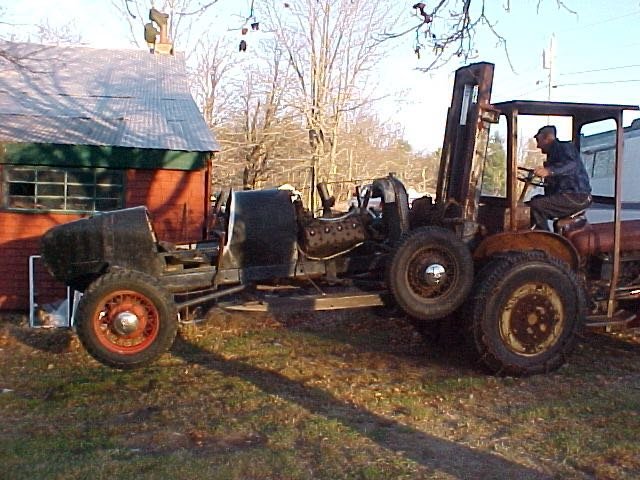 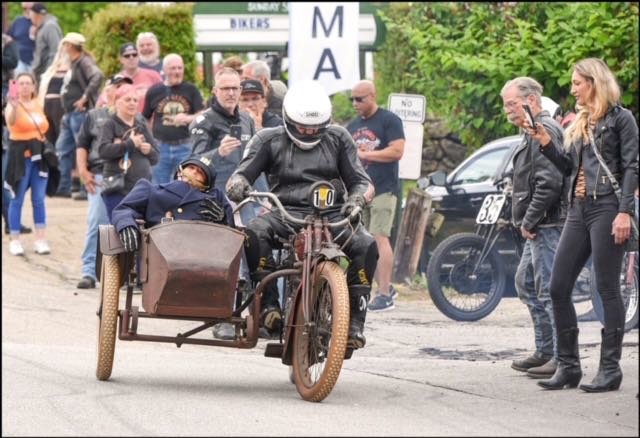 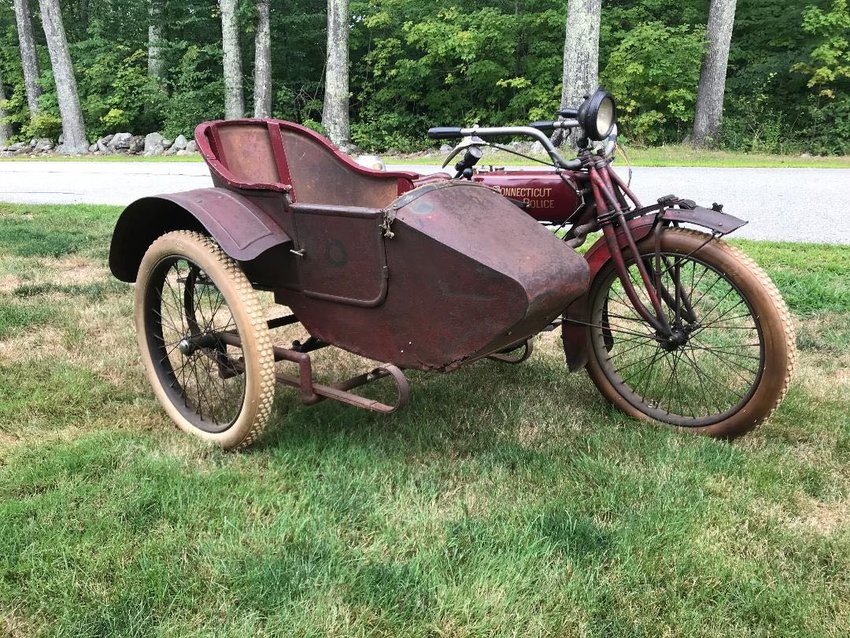 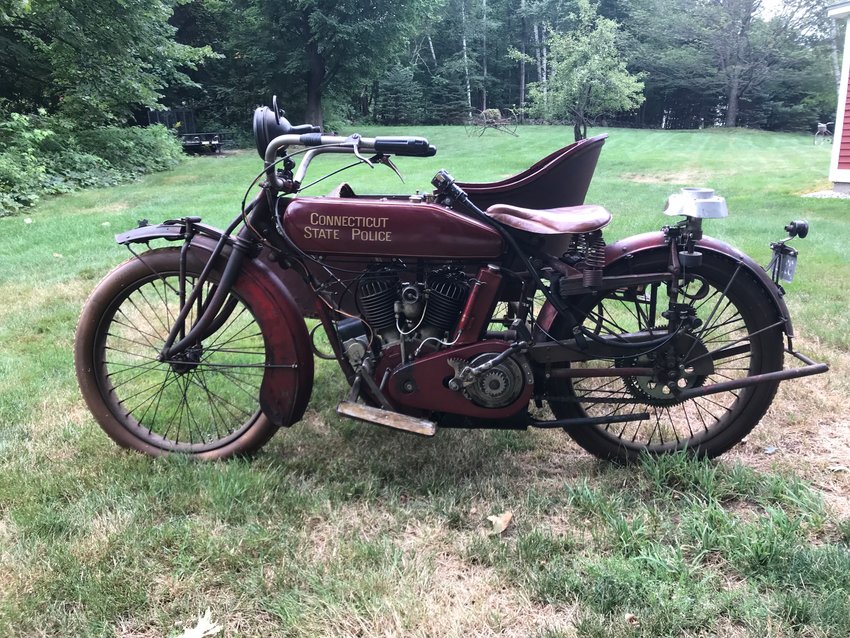 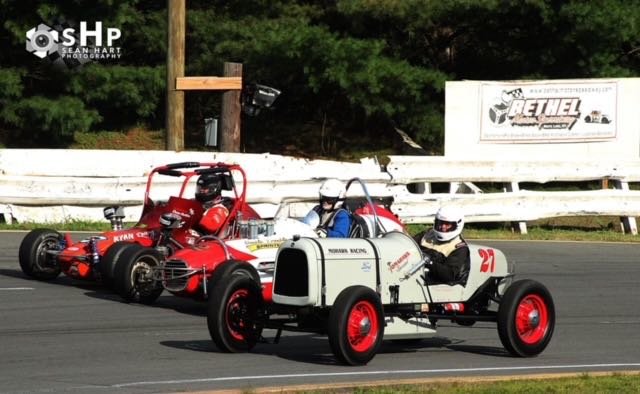 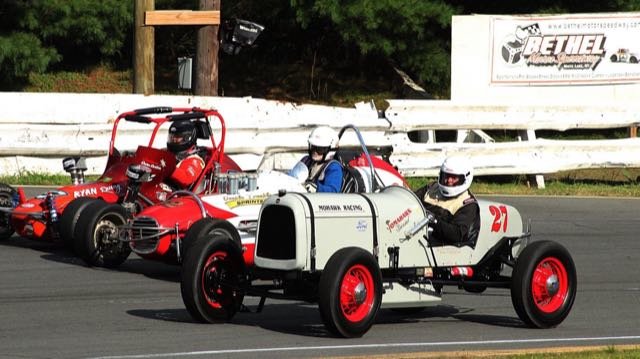 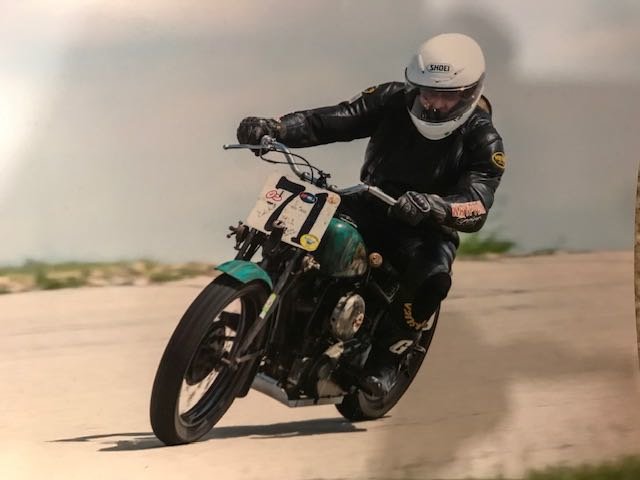 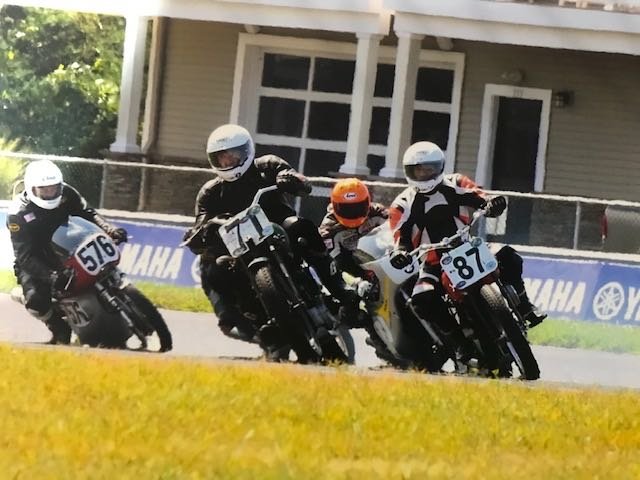 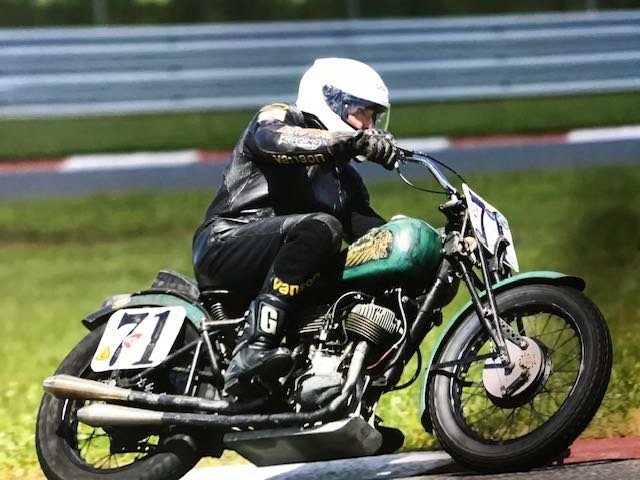 For Crompton, 67, it all started when he was about 6, after his dad took him to a sprint car race in Pennsylvania. There he watched the legendary modified and sprint car driver Louis George “Lou” Blaney (1940-2009), a Pittsburgh Circle Track Hall of Famer, burn up the asphalt.

“I still remember that first sprint car race,” he recalled, adding, “He was the driver that got me hooked... I was just fascinated, and when I was old enough, we’d go into the pits and talk to the drivers.”

These days, those early experiences down in the pits still carry on with Crompton. When he’s showing off his vintage rides or classic-era motorcycles, he said he never turns down a kid who wants to learn more about the sport, get a chance to sit in one of his race cars or perch on a racing motorcycle.

Asked if he feels a connection to the past with the racing machines of eras gone by, he replied, “Absolutely.” He noted that vintage car racing is more about preservation than wheel-to-wheel competition, as opposed to racing old bikes, where “once the green flag goes down, it’s ‘let’s go buddy,’ you’re in it with both feet the whole way.”

For Crompton, the worlds of racing vintage cars and bikes are intertwined, as he has a stable of both steeds of steel. When not participating in ACOT events, he’s on the throttle at motorcycle races as a member of the United States Classic Racing Association (USCRA), the oldest vintage motorcycle racing club in the country.

Back in 1971 or thereabouts, he started racing bikes in motorcycle hare scrambles, “and the hook was set, there was no turning back... I was just a kid, but once you get a taste for it, that’s it.”

Crompton began on a stripped-down Suzuki PS185, “an endure kind of bike,” then moved up to a Penton motorcycle, a full-blown racing machine built by John “Jack” Penton. It’s one of the bikes that were big on the international circuit back in the late 1960s and early ‘70s.

“Then life happens, a real job, stuff like that,” he said. His days of motorcycle racing were put on hold for a while, and thoughts of old racecars were still a dream to be fulfilled.

“I decided to get back into it, everything from land speed racing, road racing and motocross, all of the above,” he said, adding that he got interested in old racecars in particular while attending motorcycle-racing events.

“We raced motorcycles, and the vintage car guys would come in... I got to see the cars, and [I thought], ‘Wow, these are the kind of cars I watched as a kid growing up, I’ve got to get into this.’”

These days, he races a 1938 Indian, a 1978 Yamaha and a 1949 Indian that he used during Laconia’s Motorcycle Week, advertised as the “world’s oldest motorcycle rally” during the not-for-the-faint-of-heart Tower Hill Climb out of Weirs Beach.

While his everyday ride is a 1940 Harley Davidson, along the motorcycle way, Crompton picked up a 1917 Indian complete with sidecar, a former state police bike.

When not attending vintage car events, he competes in bike racing.

Nobody ever said that bike racing was easy like a greased pig—no offense to Harleys. In a race five-some years ago, Crompton lost it in turn six and went over the handlebars at about 70 miles per hour.

Back to Tom Crompton’s garage to a couple of what he said are known as “Big Cars,” now referred to as sprint cars, that date from the 1930s.

At Bethel Speedway near the end of July, Crompton took to the local quarter-mile oval with his #10, a late 1930s Ford race car. It was built by Louie D’Amore, who was inducted into the New England Auto Racers Hall of Fame in 2011. First raced in 1939 at Thompson Speedway in Connecticut, the car was “rebuilt, restored and recreated” by Louie and his two sons in the 1990s.

His #27, the “Tomahawk Special,” a 1930s sprint car, may make an appearance at the local speedway in October. It was built up in Maine by Pappy Woods, a Native American well known for building and driving “Big Cars.”

Woods’ team was called “Mohawk Racing,” and #27 was raced throughout New England on dirt tracks as well as asphalt; it also logged time as an ice racer.

“Pappy Woods was a real colorful guy; he was real proud of his heritage,” said Crompton.

His first reaction upon first setting eyes on the old racer was, “I’m in way over my head,” but after a lot of research and help from racing folks, it was rescued from decades of dusty oblivion in a storage container.

“Big Cars” #10 and #27 share more than the passage of time, as both were hand-lettered by Alex Olivera who, back in the day, was a contemporary of hot-rodding luminary Ed “Big Daddy” Roth, of Rat Fink fame, and Von Dutch (Kenneth Howard), one of the most famous American motorcycle mechanics, builder of the Von Dutch Falcone, 1929 Super Squirrel, among many other notable bikes.

“He was a class act,” said Crompton of Olivera, adding that freehand lettering is a “lost art.”

His take on Bethel Speedway?

“The fans, fellow racers and the speedway make the 260-mile trip from New Hampshire, five hours each way, well worth it." 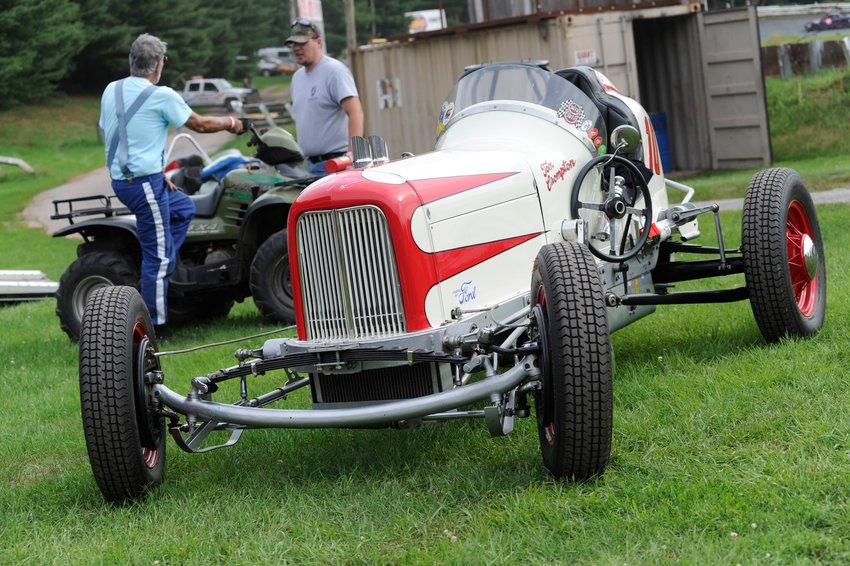 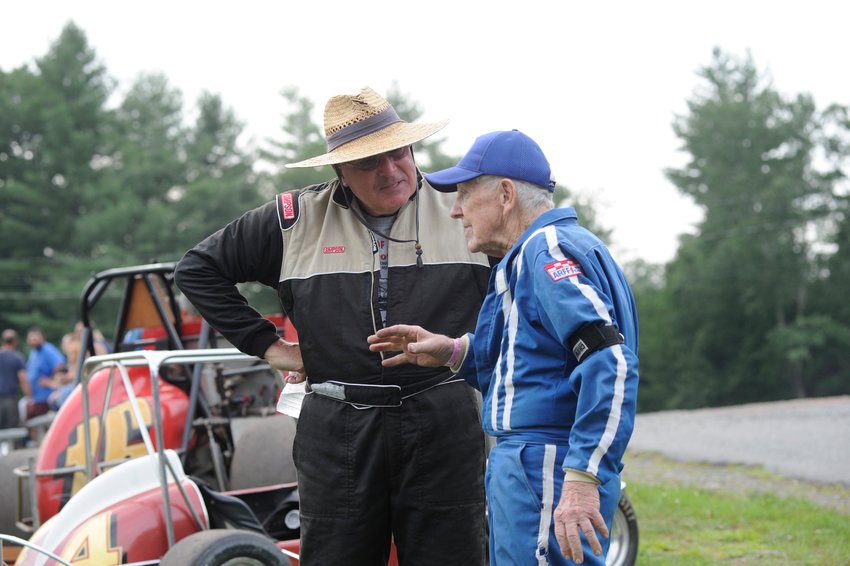 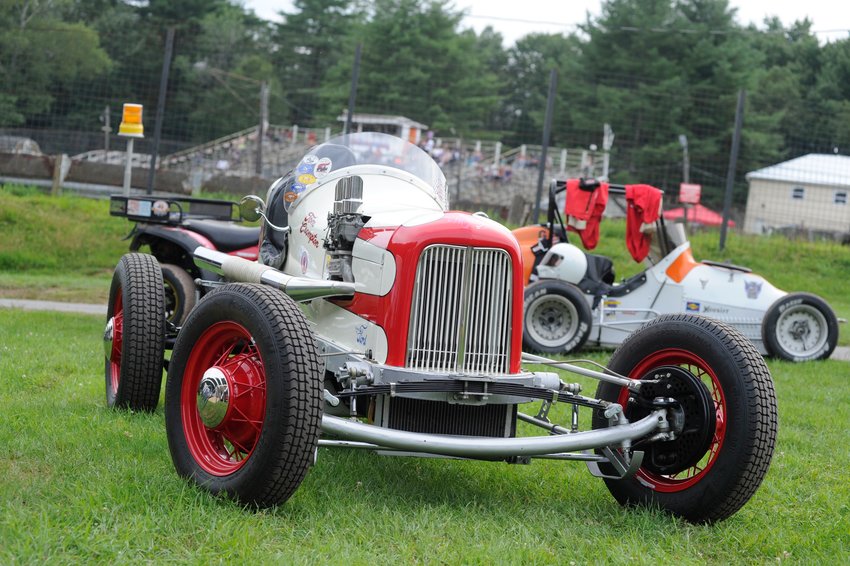 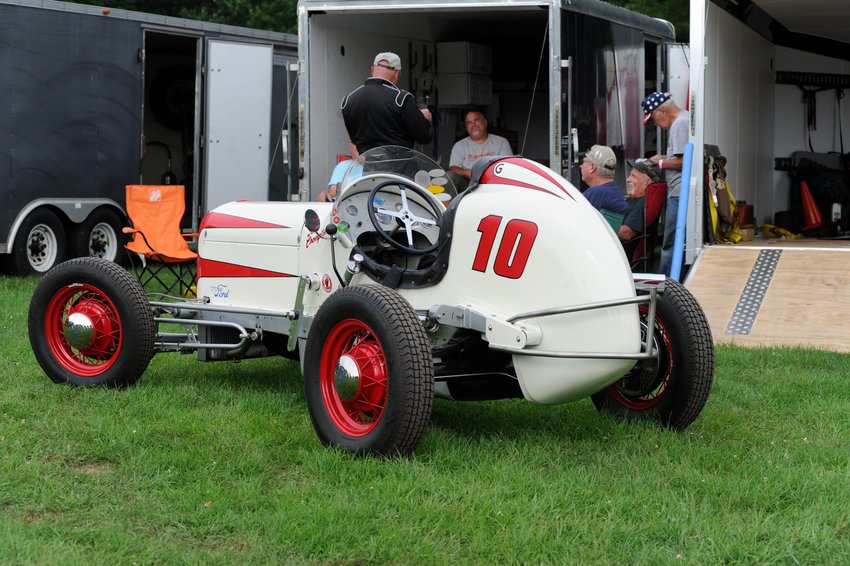 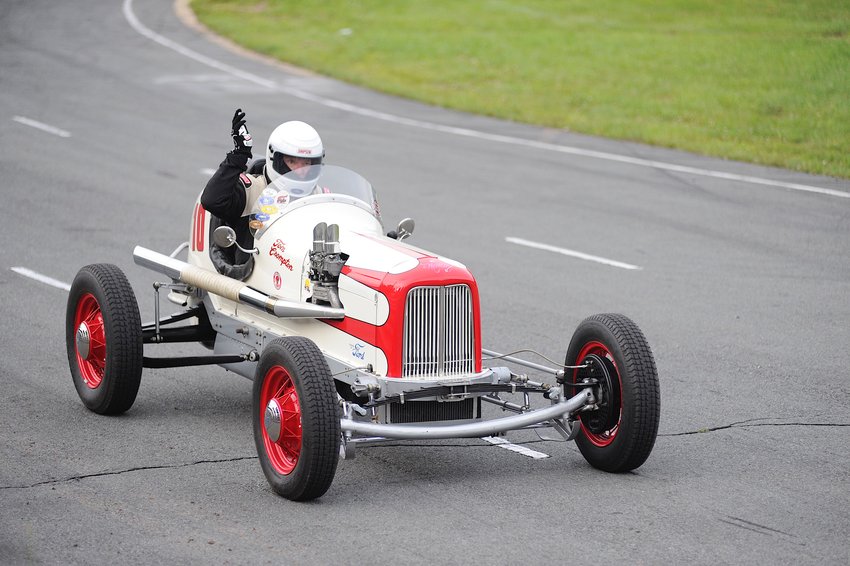 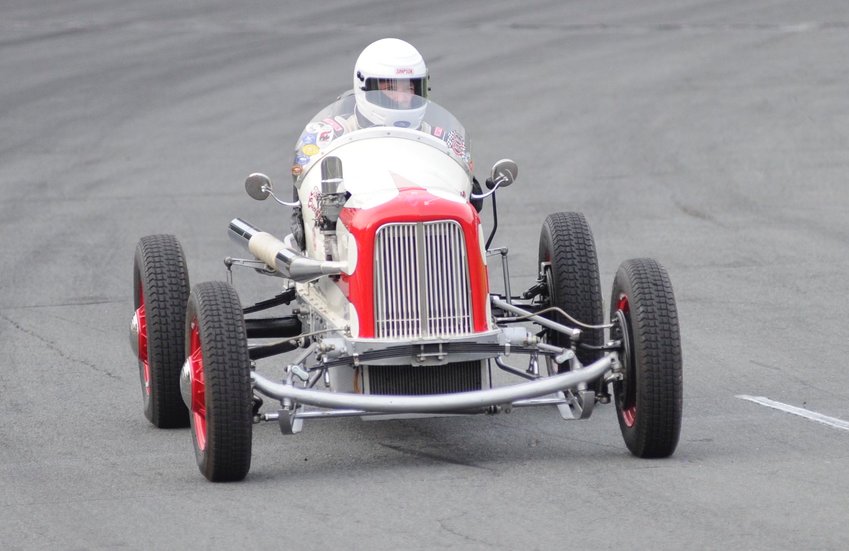 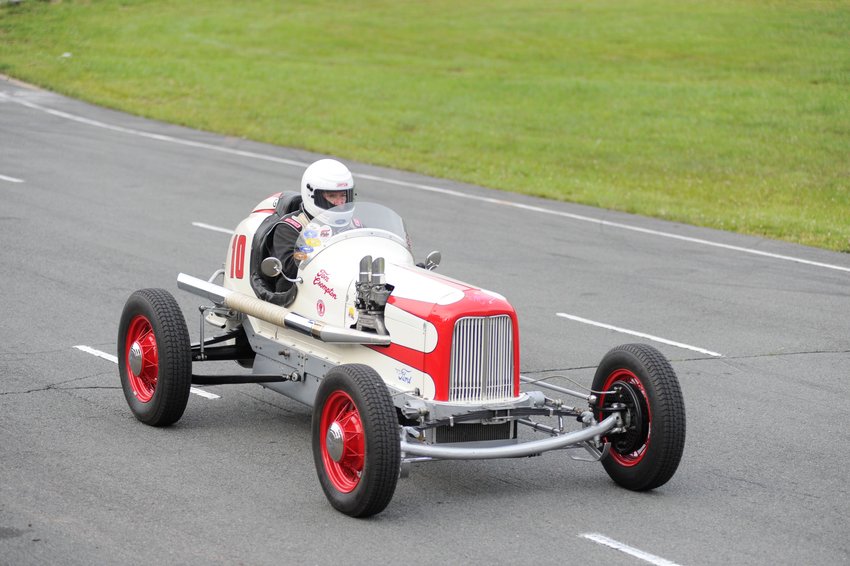 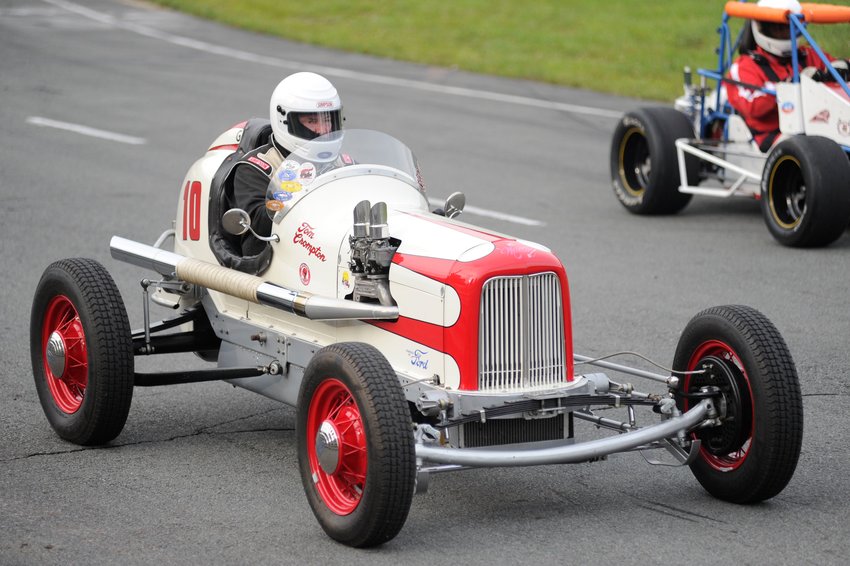 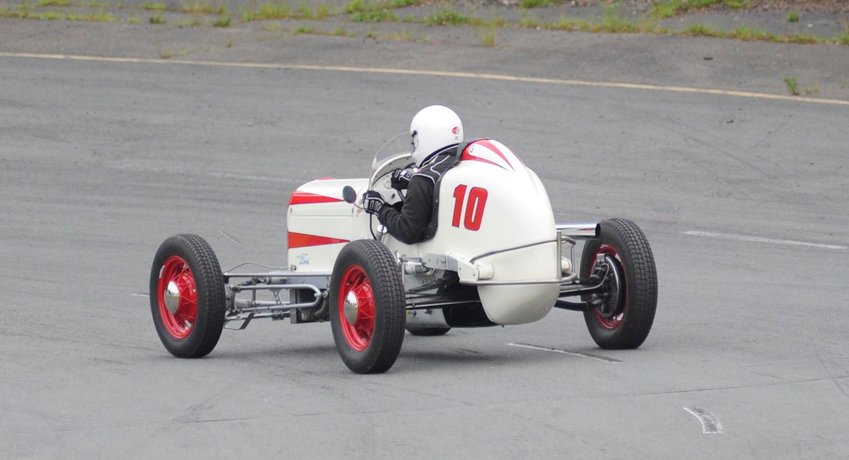